Michael Harris-Love, PT, MPT, DSc, who became the head of the University of Colorado School of Medicine Physical Therapy Program last year, describes himself as an “unlikely candidate” for physical therapy school.

For six years, he worked to save money for his education while attending community college along the way, and changing majors several times. “Generally speaking,” he said, “having few financial resources and a host of eclectic interests is not a recipe for academic success.” 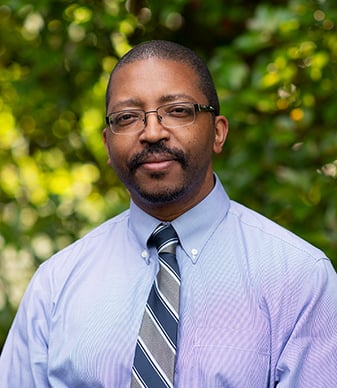 Harris-Love worked as a computer-aided design and manufacturing technician at a Motorola plant in Arizona. During that time, he would visit the company library during his lunch to read about other careers. He found the profession of physical therapy appealing, so he began logging volunteer clinical service hours needed to apply to most PT schools.

When Motorola announced layoffs, he leapt at the chance. The severance package gave him the necessary resources to pursue his undergraduate degree as a full-time student.

During his senior year at Northern Arizona University, Harris-Love attended a career fair where he met a senior member of Mayo Clinic’s admissions team. At the time, Harris-Love was considering six schools with PT programs. Mayo was not on that list.

Yet, after interviews in three states over several months, Harris-Love accepted the offer from Mayo Clinic’s PT Program. It was 1995 and Harris-Love was the first Black man in enrolled in the program. After graduation in 1997, he launched his clinical career at Mayo Clinic and joined the National Institutes of Health’s Clinical Center in 1999.

Most recently, Harris-Love held multiple appointments at separate locations in the Washington, D.C., area. That required shuttling between sites at the VA Medical Center, the Milken School of Public Health at George Washington University, and the College of Health and Human Services at George Mason University.

“Having held various positions in medical centers, universities, and federal government, the possibility of being affiliated with these entities at one campus at CU Anschutz was very appealing,” he said.

In that one campus, he found a welcoming home. The School of Medicine’s support for the program and its dedication to inclusive, collaborative culture was an important feature. The Posner-Mayer Endowed Chair provided critical resources for recruiting Harris-Love and will allow him to implement a plan for a more diverse and equitable PT program.

Harris-Love brings extensive clinical research experience to campus. He has contributed to the development of standardized outcome measures for clinical trials involving participants with muscle disease, and his current research is focused on developing innovative exercise interventions for those with sarcopenia, or muscle loss.

The CU PT Program celebrated its 70 anniversary in 2017. The program’s previous director, Margaret Schenkman, PT, PhD, a renowned Parkinson’s disease researcher, helped build the program into one of the nation’s best. Graduates and benefactors like Joanne Posner-Mayer, PT ’73, also made the program stronger.

In addition to establishing the Posner-Mayer Endowed Chair held by Harris-Love, she has funded scholarships to attract a diverse and talented student population and hosted annual receptions. She is also an active member of the CU Foundation Board of Trustees, CU PT Scholarship & Endowment Board, and an emeritus member of the Physical Therapy Alumni Association.

“I am proud to be associated with such an outstanding program, and honored to express my gratitude to CU for accepting me as a student five decades ago,” Posner-Mayer said. “Through this endowed chair, I hope to help create an even better learning environment for students as they pursue their education.”

"The endowed chair is in many ways a reflection of the growth and maturity of the physical therapy profession itself,” Harris-Love said. “During my initial years of clinical practice at the Mayo Clinic in the late 90s, 33 states had direct access to physical therapy, whereas today, every state has some form of direct access.”

Yet even as the discipline has become more widespread, the field must improve its diversity and inclusion efforts. “There were six black physical therapy directors across the country when I graduated,” he said, “and there are still six today, despite the number of programs increasing during this span of time. There is still much work to be done.”

Posner-Mayer said she is confident that Harris-Love will make significant contribution to those efforts.

“Dr. Harris-Love is committed to promoting a diverse and inclusive culture, and brings a perspective that will be important to the future of the program and the profession,” she said.

One way to do that is to look for talented students in unexpected places in the same way that the Mayo recruitment officer found Harris-Love.

“Considering my own nontraditional academic journey,” Harris-Love said, “this endowed chair will also fuel our continued efforts to recruit and support nontraditional students, and to help broaden our view of who can become a physical therapist or the next great rehabilitation scientist.”

Among his goals, Harris-Love plans to strengthen existing PT residency programs, increase efforts to support rural practice, and improve PT access for underserved populations in Colorado, including urban areas including the neighborhoods near the Anschutz Medical Campus.

“It means doing our part to usher physical therapy into a near future where the value of our care is linked to the public health goals of Colorado and beyond.”

Joanne Posner-Mayer earned her physical therapy degree at CU in 1973 and then worked for more than six years in Switzerland. There, she was introduced to the use of “Swiss Ball” exercise balls in physical therapy.

She returned to the United States in 1980 and continued a clinical practice. Ten years later, she began to lecture and train others on the orthopedic and sports uses of the ball.

Posner-Mayer founded Ball Dynamics International, Inc., in 1991, meeting the growing market demand she created through her teaching. She subsequently pioneered the use of the Swiss Balls in the fitness market through her second company, Fitball, Inc. Posner-Mayer has delivered lectures nationally and internationally. She also has created instructional videos and written books. She is a recipient of the Physical Therapy Alumni Achievement Award and received an honorary doctorate in humane letters from the University of Colorado.

As a first-generation college graduate and the daughter of a Holocaust survivor, Posner-Mayer has shown profound appreciation for CU and the Physical Therapy Program through generous support.  The Posner-Mayer Endowed Chair is made possible with generous commitments totaling more than $2 million.