This story is part of the University of Colorado School of Medicine’s Match Day coverage. Match Day 2022 is on March 18.

For anyone who’s never done two-a-days in the August heat or faced down an opposing defensive lineman, the parallels between a football field and a health care clinic might not seem immediately obvious.

But for Troy Kincaid, a fourth-year student in the University of Colorado (CU) School of Medicine, those parallels are a significant part of what drew him to medicine: the symbiosis and teamwork, the planning and follow-through, the challenges that require stamina, persistence, and steady determination.

As he awaits his internal medicine-pediatrics (med-peds) residency match, the accompanying nerves and excitement will be a milestone on a journey that so far has taken him over football fields and through chemistry labs, on emergency medical services calls, and now to the cusp of a career in med-peds.

“The people I’ve met along the way and the role models — both in my classes and the attending doctors and nurses that I’ve been able to meet — have affirmed for me that this is the path that I’m supposed to be on,” Kincaid says. “It’s not always the easiest path and it maybe wouldn’t be the best one for anybody else, but it’s the right one for me.”

He admits it took him a while, that he didn’t grow up wanting to be a doctor. Before he was born, his father, who had Alport syndrome, a genetic disease that damages tiny blood vessels in the kidneys, and needed a kidney transplant and found a donor in Kincaid’s maternal grandmother.

“There was a sort of mythology around it,” Kincaid says. “I grew up inspired by that story, which defined altruism for me, and I remember being curious about the science behind it. My dad's illness story has played a big role in inspiring me to pursue medicine, just seeing how he and others in my family dealt with chronic illness.”

Kincaid grew up in Lindenhurst, Illinois, a small town between Chicago and Milwaukee where school field trips occasionally involved milking cows. When he and his girlfriend, Heather, were looking at colleges, they decided on Washington University in St. Louis, Missouri, a place where he could continue playing football on the university’s Division III team while double-majoring in chemistry and Spanish. He also got certified as an emergency medical technician (EMT) and become a member of the campus emergency support team. 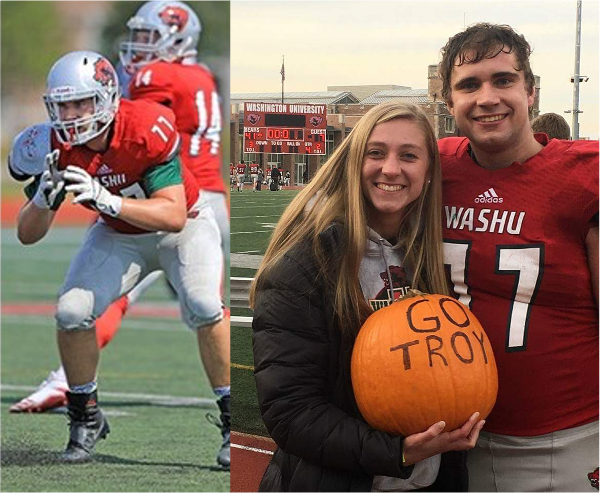 Troy Kincaid playing football for Washington University, left, and on the sidelines with his girlfriend, Heather.

“I think the local fire department appreciated us because they had to deal with a lot fewer drunk college students. We could perform supportive measures for things that didn’t rise to the level of having a paramedic on scene,” he says. “But I learned a lot from being in that community of people who were really excited about serving others and seeing how they did that, and it taught me a lot about leadership in this specific medical field.”

There was no one, clear moment when he felt inspired to pursue medicine, he says, but he recognizes the accumulation of mileposts pointing the way: his father’s illness, his experiences in football, and what he’d seen of patient care shadowing physicians in St. Louis and hearing them compare the culture of medicine to a team sport.

He studied for and passed the MCAT and began applying to medical school while Heather applied to audiology graduate programs.

Practicing internal medicine like the coach of a team

They leaned toward Colorado partly because they’d been on a ski vacation to the state, and partly because one of Kincaid’s interviewers, when he was applying to the CU School of Medicine, mentioned at the end of the interview that his mom would be proud of him.

“I’ll admit that got me emotional, but it really let me know that this would be a place that would see me as a whole person,” Kincaid says. “It would both challenge and support me, and keep with this theme of growth that I was beginning to see I’d been pursuing my whole life.”

He took a generalist approach to his studies, keeping an open mind to the paths he could pursue in medicine, but he was inspired by two CU School of Medicine graduates he met during his first day of internal medicine inpatient service. They were in their first week of residency in med-peds, “but they ended up being two of my best teachers for entrance into the clinical space,” Kincaid says. “They put this career path on my radar early on because they always took the time to teach me. We’d be walking around and between seeing patients they’d draw on the back of a piece of paper like a mini chalk talk for me.”

An elective class in med-peds showed him that the discipline “really puts you through the washing machine of all the things a medical pediatric provider can do,” he says. “In rapid cycle fashion you see all these different providers, all these broad strokes, and the synergy that brings them together so that one plus one equals greater than two.”

As he awaits his residency match, he says he may not know exactly the sort of medicine he will practice, but he knows how he wants to practice it.

“I know that I want to practice medicine with compassion and humility,” he says. “The thing I appreciate about general practice is that I have to accept that I will not know everything, that I will never know all there is about a specific organ system, but I’ll get to have a basic understanding of all the systems. To take it back to football, it’s like getting to be the coach of a team. The quarterback is the patient, they get to drive their own care, but in their headset is their primary care doctor giving them the best information possible with their best interest in mind.”