When COVID-19 struck during his first year of medical school in 2020, Michael Skaggs was still a few years away from being able to provide clinical care to patients. But he was right on time to put his skills as a former engineer and whitewater rafting company manager to work. 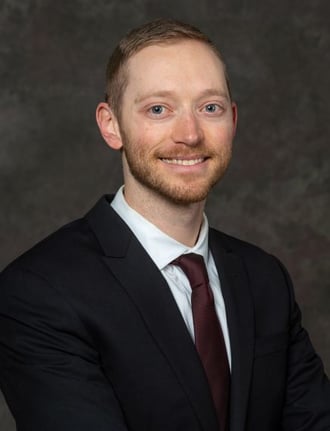 Along with faculty and classmates from the University of Colorado School of Medicine, Skaggs designed and implemented a data collection program for four COVID-19 mass vaccination events held in Denver in January and February that were hosted by UCHealth. The system helped close to 11,000 senior Coloradans (ages 70 and over) get vaccinated safely and efficiently. And the data collected continues to inform current and future vaccination efforts.

The most applied science

Skaggs hasn’t had the most traditional path to medicine. Long before the pandemic, he was working in California as a civil engineer on large-scale construction projects like the Los Angeles Metro Rail light rail system. After that, he moved to Buena Vista, Colorado, where he helped manage a whitewater rafting company for three years. But medical school was always in the back of his mind.

“When I was applying to colleges out of high school, I was debating between applying for engineering or pre-med. So, the interest has always been there,” Skaggs says. “I think the intersection of the problem-solving aspect of engineering and being able to apply that to people is how I finally decided to go into medicine. Because I think ultimately, medicine is the most applied science you can get into.”

Skaggs earned his bachelor’s and master’s degrees at CU Boulder. Once he decided to apply to medical school, choosing CU School of Medicine was a no-brainer.

“Personally, I already had an established community of people here that I could rely on,” Skaggs says. “And professionally, I felt that a lot of the school's values really aligned with my values.”

As a first-year medical student, Skaggs wanted to find a way to help when the pandemic hit. During a presentation by Daniel Resnick-Ault, MD, and Sarah Wendel, MD, both fellows in the Department of Emergency Medicine, Skaggs learned about the UCHealth drive-through mass vaccination events and the need for student volunteers. He immediately saw an opportunity to help and sent Resnick-Ault and Wendel an email outlining his background.

After meeting with Skaggs, Resnick-Ault and Wendel offered him the role of designing and implementing a data collection instrument to track how quickly cars were moving through the vaccination system, which would consist of numerous registration stations, vaccination tents, and a large observation waiting area.

“We were immediately impressed by his maturity, easygoing nature, and pragmatic approach to problem solving,” Resnick-Ault says. 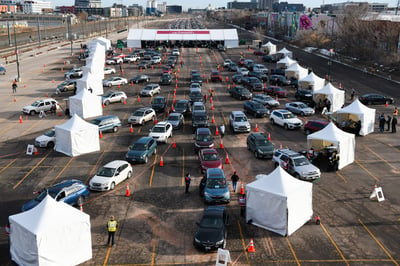 What Skaggs produced exceeded their expectations. His system allowed volunteers to tag each vehicle with a number, then, with a push of a button, time stamp those vehicles as they moved through the event. The data populated to a spreadsheet in real time, with color-coded flags that would alert the operations team to slow downs.

“Based off of how we were assigning numbers, we could see the times for registration and vaccinations in each lane,” Skaggs explains. “So, if certain lanes were moving slower, we could address those issues or direct more vehicles to lanes that were moving faster. Or when we would switch people in and out for breaks, we could see the effect of putting in new individuals that maybe hadn't gone through the process before and watch the learning curve happen in real time.”

In addition to allowing the UCHealth mass vaccination Incident Command Team to make changes on the fly during the events, the data Skaggs collected also helped streamline and improve processes on a larger scale. After the first two weekends (the initial pilot weekend when they vaccinated 1,000 patients and the following weekend when they vaccinated another 10,000), the CU team shared their data with a group at York University who used it to run simulations of the events. An analysis of those models led the CU team to change the process, so that patients returning for their second doses during the next two events would register and receive the vaccine at the same station, rather than register at one station and then drive to a second one for their shot.

Although Skaggs spent most of his time at the events tracking the data, he was able to spend some time with the patients as well. “You can sit behind a laptop all day and look at numbers, but I think it's really important in any process to get out and see it in real life to understand what those numbers truly represent,” Skaggs says. “I was excited to spend some time at the greeter station where we were first interacting the patients and help explain and direct them through the process.”

“As a medical student, we're somewhat disconnected at times from what I would call ‘real life,’ so being able to engage in this project has provided a sense of connectedness with the local community,” he adds. 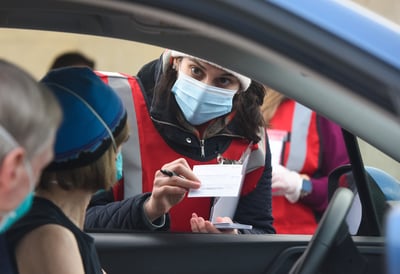 “Michael quickly became a trusted voice on the leadership and planning team,” Resnick-Ault says. “Dr. Wendel and I would not consider working on future mass vaccination projects without him.”

In the meantime, Michael is focused on his studies as he approaches the end of his first year. He hasn’t picked a specialty yet, though he says he is interested in emergency medicine and, in particular, wilderness medicine. Whatever he decides to do in the future, he’ll continue to look at medicine through the lens of engineering.

“Whatever area of medicine I go into, my goal is to be able to incorporate process improvements, efficiencies, and administrative improvements,” Skaggs says. “We’re always looking for ways to improve the patient experience, whether that's the quality of care, the safety of care, the efficiency with which care is delivered, or ways to make healthcare more affordable. There’s always room to improve what we do, and that’s an area where I really feel like I can contribute.”