Home News Coming Home, Giving Back and Paying it Forward back to News

This story is part of the University of Colorado School of Medicine’s graduation coverage highlighting our graduates.
The commencement ceremony will take place on Friday, May 28, 2021, at 9 a.m.

For Simon Feseha, attending the University of Colorado School of Medicine was a little bit like coming home.

The high school he attended is just six minutes away from campus; his parents’ house is four minutes farther. He grew up visiting friends and relatives at UCHealth University of Colorado Hospital and even volunteered at the facility during high school.

“I always had that desire that I really wanted to go to CU for medical school,” says Feseha, the son of Ethiopian immigrants and the first in his family to go to and graduate from college. 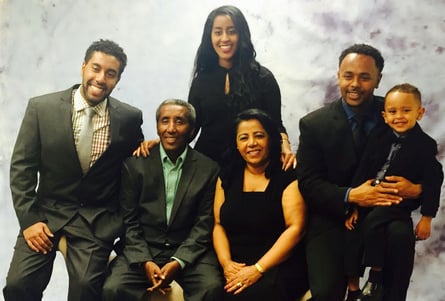 Feseha and his family.

“One of the things my Ethiopian heritage really taught me was the value of community over the individual, which is a quintessential component of who I am,” he says. “Acts of service and looking to the needs of others is a big part of why I wanted to go into medicine. That even translates to the way I approach patient care and the role I play on the teams I’m on.”

Feseha attended the University of Colorado Boulder for his undergraduate dual degrees in molecular cellular developmental biology and neuroscience; while there, he was part of the CU School of Medicine’s Undergraduate Pre-Health Program, a summer internship that pairs students with physicians and gives them an 8-week crash course in the world of medicine.

“I really learned a lot from that experience,” Feseha says. “I had spent a day here and there with a few medical providers, but I had never had anything that was that extensive. It really helped solidify my goal of going to medical school.”

A reading assignment for the Undergraduate Pre-Health Program ignited another passion for Feseha. The book “Medical Apartheid: The Dark History of Medical Experimentation on Black Americans From Colonial Times to the Present,” by Harriet Washington, opened his eyes to the health disparities that exist for Black and brown communities, as well as immigrants like his parents.

“It’s an incredible book about how medicine has interfaced with race,” says Feseha, who helped develop an implicit bias curriculum for first-year medical students during his time at the CU School of Medicine. “It was really formative in my desire to want to serve underserved communities in medicine.”

He saw those disparities and implicit biases firsthand during his clinical training, whether it was a Black patient who wanted more information about their care being labeled “difficult” or an immigrant who didn’t want to take a certain medication classified as “noncompliant.”

“It’s easy to label them as noncompliant rather than really digging down and figuring out what’s at the root of them not taking that medication,” he says. “Maybe it’s a lack of trust in the medical community because of historical reasons that have built up in their community. I feel like I had a good opportunity when we as a medical team were headed one way, and just by being able to talk to a patient and really spending time with them, I was able to course-correct their care.” 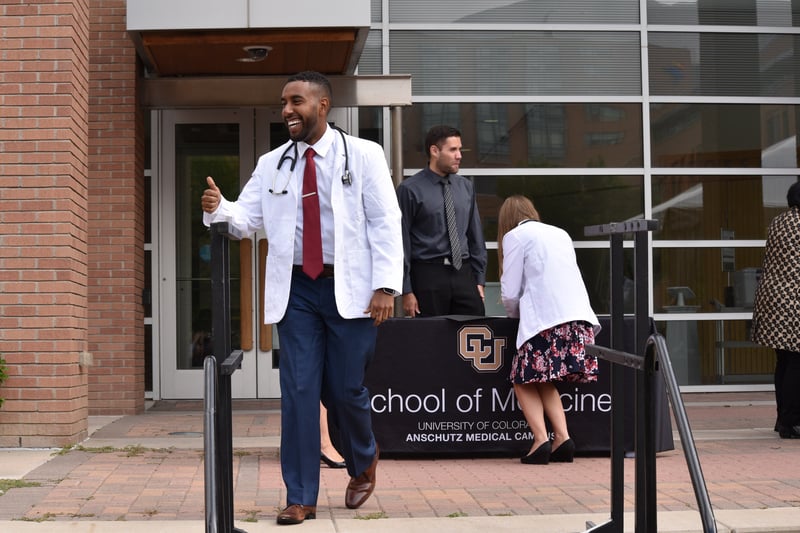 Feseha after the White Coat Ceremony during his first year of medical school.

It’s a direction Feseha plans to continue exploring during and after his internal medicine residency at the University of California San Francisco.

“I’m big on community work and getting involved in activities to pay forward the opportunities that were afforded me,” he says. “Growing up in a low-income community, I saw many people around me who were off and on health insurance. The reason I wanted to go to medical school was to serve underserved communities.”

The importance of mentorship

As he looks back on his time in medical school, Feseha is grateful for the close friendships he developed and the support he received from CU School of Medicine faculty.

“During my preclinical training, I was studying in the library 12–14 hours a day. Being able to form a group of friends to not necessarily study with, but study next to — just to have people to go through that process with helped a lot. And the reassurance from faculty that this process is tough and to trust the process — that this is important for becoming a doctor.”

He worked with many faculty members during his four years of medical school, but Feseha singles out Shanta Zimmer, MD, as one of the most impactful. "She supported and encouraged me through this journey," he says.

He also is grateful for the mentors he worked with on the implicit bias curriculum, including Paritosh Kaul, MD, Regina Richards, PhD, and Rita Lee, MD. Fellow medical students Stephanie Nwagwu and Marcus Marable helped with the project as well.

“I loved that experience,” Feseha says. “My mentor and I went through several ideas and narrowed them down to one. I did a bunch of experiments and then wrote the paper with help and guidance from my mentor.”

As he prepares for residency in San Francisco, Feseha says the most important things he learned at the CU School of Medicine were to put the patient first, and to pursue your passions.

“Viewing everything from that standpoint helps things flow together,” he says. “The anesthesiology project I was involved in didn’t have anything to do with internal medicine, but I was passionate about it and really wanted to contribute to the scientific community in that manner.”