For Frank DeAngelis, the “beloved 13” are never far away. They are with the retired Columbine High School principal when he speaks about school safety across the country, while he works as a consultant for safety and emergency management in Jefferson County, and the moment he wakes up in the morning.

“I refuse to become helpless and hopeless … each morning I recite the names of my beloved 13 and they give me the reason to do what I do,” DeAngelis said. “They gave me the reason to walk back into Columbine High School for 15 years after the tragedy.” 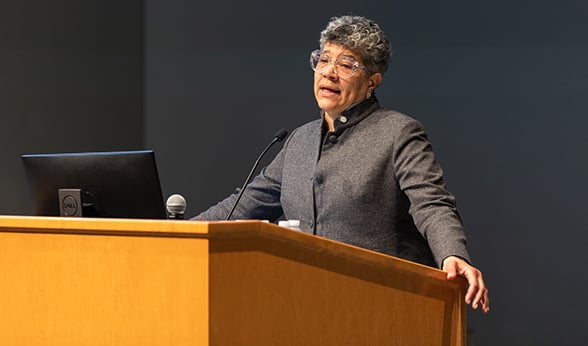 Deborah Prothrow-Stith, dean of the Charles Drew University of Medicine and Science, talked about cultural, political and historical aspects of adolescent violence in her keynote address.

Although the Columbine shooting of 20 years ago represents one of the darkest days in Colorado history, a day-long symposium at the CU Anschutz Medical Campus on April 16 struck a hopeful and problem-solving tone. “Uniting to Prevent School Violence – 20 Years Since Columbine” drew more than 200 attendees and featured national experts on school violence, local politicians and leaders in law enforcement and mental and behavioral health.

The event was hosted by the CU Center for Bioethics and Humanities, the Center for the Study and Prevention of Violence at CU Boulder, and the Colorado School of Public Health and its program for Injury Prevention, Education and Research (PIPER). The interactive program allowed audience members to use their smartphones to participate in polls, ask questions and even create word clouds (when asked to enter the first word that came to mind when thinking about U.S. school violence, “gun” and “preventable” emerged as the top choices).

In his introductory remarks, Matthew Wynia, MD, MPH, FACP, director of the Center for Bioethics and Humanities, said the tragedy of April 20, 1999, affected the entire country and rippled across the world. He said it forced Colorado to take a leadership role in helping others to learn how to prevent school violence.

“Today our hope is to honor and respect the legacy of the tragedy at Columbine by coming together to learn and provide a forum for our state to help move forward the agenda to prevent such future incidents,” Wynia said.

The "Uniting to Prevent School Violence" symposium drew more than 200 people to an Education 2 South auditorium on April 16.

It was DeAngelis’ vivid recollections of that horrific day and its aftermath that evoked emotions from attendees.

The principal was in his office about to renew the contract of a first-year teacher when his secretary broke in with reports of gunfire. When he stepped into the hallway, “my worst nightmare became a reality because I encountered a gunman 75 yards away,” DeAngelis said.

The principal, the gunman and the key

He saw a group of girls walking into the same hallway, having just come from the locker rooms next to the gym. He ran toward the them and the gunman, urgently ushering the girls back down the hall toward the gym. “As the girls were screaming and the shots were ringing louder I reached in my pocket where I had a set of about 35 keys on a key ring,” he said. “The first key I pull out I stick in the door and it opens on the first try.”

To this day, DeAngelis regularly receives photos from those girls – now women in their late 30s – showing off their growing families, their smiling children. “They say, ‘Mr. D, we’re so glad you found that key.’ … I’m not sure if I found that key. Someone found it for me.”

As mass shootings continue on a regular basis, DeAngelis and the thousands more who’ve been directly affected search for ways to prevent future senseless acts. The retired educator, who received a master’s degree from CU, noted that “so many lessons have been learned” over the 20 years, including improved response systems, crisis care and understanding of recovery for PTSD.

Back in 1999, he said, fire drills were the only emergency exercises held in school. “So that’s an important lesson learned – that we’re training for that day when something could happen at your school, at your church, at your mental facility.”

Much to learn from victims

She said survivors of acts of mass violence are some of the best champions of solutions to the problem. “There’s a lot to learn from them, and the politicians listen to them when they don’t listen to the data.”

In 2015, for example, 33,800 Americans died in car accidents, and Congress approved $830 million for safety research. Meanwhile, 33,636 people died from gunshots that year while just $5 million was OK’d for gun safety research. “It seems we could have more of an impact if we had more collaborative, concerted funding focused on prevention (of firearm violence),” she said.

The matter of guns

Prothrow-Stith noted that there are almost twice as many suicides each year in the U.S. than homicides. “What we’re learning about guns and their participation in both homicide and suicide suggest that there are things we can do,” she said. “If I were to say where I’m probably the most frustrated it’s in our lack of ability … to address gun ownership in the U.S.”

She pointed out that New Zealand, where recent shootings at two mosques killed 50 people, has already banned semi-automatic weapons and assault rifles. In contrast, she noted, the U.S. has pro-violence cultural messaging that dates back centuries and it’s not changing. “I don’t know that we’ve released our children of the marketing of violence,” she said. “Now we’re marketing this thing called violence to girls as well.”

‘Colorado stands as a model for other states to look to when it comes to school safety.’ – Lt. Gov. Dianne Primavera

She admitted to reaching a point of being “almost withdrawn from this issue” when not even the devastating Sandy Hook Elementary School massacre in 2012 was enough to spur Congress to act. But the strong activist responses by students after last year’s Parkland, Fla., shooting, and the subsequent passage of a Florida gun bill, has renewed her optimism.

“When we think about hurt children hurting other children we really have to think about what we give as cultural messages, and of course we need to make the hurt go away,” Prothrow-Stith said. “But if we can share strategies for healing and handling the hurt better and healthier, rather than fighting or hurting oneself, I think we could make a dent in this.”

Primavera said Colorado has done much to improve school safety since Columbine, including:

“Colorado stands as a model for other states to look to when it comes to school safety,” Primavera said.

Emotions welled in the auditorium when DeAngelis read off the names of the 12 students and one teacher killed 20 years ago. He said his intent is to celebrate their lives. “As we go through the next four days, that’s what I want you to do. We’ll always remember the 13,” he said. “Columbine represents hope.”