Home News Reaching for the ‘Rocks’: Musician, Student Finds All He Needs at CU Anschutz back to News

For Matt Golub, the video game Guitar Hero was a way of life in middle school. Far from a frivolous obsession, the endless hours he spent shredding virtual guitar set the course for his artistic passion. He’s become a full-fledged musician – guitarist, singer and songwriter – one who’s already taken the stage at Red Rocks Amphitheatre.

But biology and math also grabbed the Colorado native’s attention, setting him down a path toward medicine; he is now a third-year student at the University of Colorado School of Medicine.

When he’s not slinging on a guitar strap or a stethoscope, Golub enjoys playing tennis, which inspired the name of his band, Splitstep. (Tennis players use the splitstep technique to set and balance themselves on the court.) 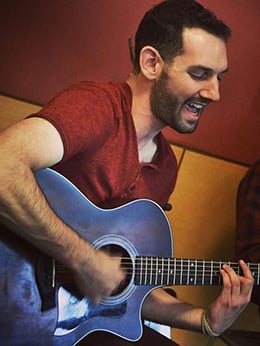 With all he’s got going on – Golub is currently in his OBGYN rotation, following cycles of psychiatry, pediatrics and neurology – keeping things in balance can be a challenge.

“As I get older and meet new people, I constantly try to surround myself with supportive figures who stand by me and encourage me to continue pursuing all of my passions,” Golub said.

It started with his father, a drummer mainly, but also no slouch on guitar. Hearing his 12-year-old son slaying Guitar Hero, the elder Golub said, “Why don’t you just learn the real guitar?”

Soon, Golub was hooked to the wood and steel of his beginner Ovation guitar. “I’d wake up before school and practice and just tried to learn all the songs I liked,” he said. “Everything just kept growing and building from there.”

Golub and his dad frequented classic-rock concerts during his teen years. While his Gen Z peers grew up on hip-hop and Taylor Swift-style pop, Golub gravitated toward prog-rock bands such as Rush, Styx and Yes.

“I just love the bands that can be really complicated, but also come up with really catchy songs. I feel like nowadays you don’t see nearly as much of that,” he said. “I love Dave Matthews Band for the same reason – for being able to be really creative and complex, while still creating pleasant music to listen to.”

Splitstep has released a string of singles – “The Shoulder,” their latest (video below), is a take on the complexities of dating in the “Me Too” era – as well as several covers of popular songs. Golub actively distributes new material via streaming platforms, social media, YouTube and the band’s website. With Splitstep’s members all having busy schedules with jobs and school, they are slowly working toward the band’s first full album, “Kaleidoscope.”

“I just want to make a product that I’m proud of and something that I would personally want to listen to all the time,” Golub said.

He formed Splitstep with Daniel Carrillo, the drummer from their previous band, Walking With Bikes. That band placed high in a radio station battle-of-the-bands contest several years ago, giving Golub his first taste of big-time performance. The band played in front of over 1,000 people at Fiddler’s Green Amphitheatre. “That was the biggest crowd I’ve ever played in front of, but it was super fun,” he said. “I love getting on stage for those occasions.”

The Red Rocks performance also ranks high – though there was no admission price for the crowd. Evergreen High School, Golub’s alma mater, held commencement at the famous venue, and his band at the time performed as part of the ceremony.

is pictured with Golub in the top photo.

A short time after moving on from Walking With Bikes, Golub and Carrillo performed at an open mic night at a Denver venue. Golub felt a bit unsure of his singing voice, but Carrillo told him nobody could imbue his songs with the same vocal passion.

“If not for him, it was going to be tough to get that confidence (to be a lead vocalist),” Golub said. “He also introduced me to a lot of other musicians. Danny is well-integrated into the Denver music scene.”

Golub attended the University of Rochester as an undergraduate, playing Division III tennis and earning degrees in psychology and biochemistry. He recalls keeping his musical ambitions mostly to himself in New York because his peer group tended to trivialize his side project. Subtle comments he heard in person and saw on social media became discouraging.

“In med school, I have been surrounded by many like-minded people who prioritize balance in their lives,” he said. “My friends at CU Anschutz seem to appreciate pursuing multiple life-goals in addition to medicine.” Many classmates have gone to his shows and some even wait on their computers in anticipation of the latest release.

Golub loves to get lost playing his guitar, creating riffs and progressions that build into the feel of a song. Then it’s a matter of figuring out the instrumental layers – and possibly even digitally collaborating with far-flung musicians. “Once I have a set melody, writing songs can be really quick. There’s just always so much on my mind that I want to write about.”

‘I love music; it doesn't feel like a job at all.

I could find myself getting lost in

it for hours and hours.’

Songwriting themes he likes to explore include dating, mental health, chasing your dreams and goals, and finding your role in the world.

For Golub, an ambition to pursue medicine has walked in lockstep with his drive to become a musician. He’s considering psychiatry and physical rehabilitation as possible specialties in medicine.

“If I go into psychiatry, I just see how much good I could do with that, and how passionate I am about that field,” Golub said.

But, if he had to choose between careers, he leans toward the one under the stage lights. And the lights he’d most love to perform under – next time, hopefully, for a sold-out crowd – are at Red Rocks.

“I love music; it doesn’t feel like a job at all. It’s just fun, and I could find myself getting lost in it for hours and hours,” he said. “It’s kind of hard to choose, but being a famous musician is the dream. I don’t know how anybody could pass something like that up.”