Recent research by Thomas Flaig, MD, focuses on which biomarkers can help determine the most effective bladder cancer treatment.

Bladder cancer is the fourth most common cancer among adult men. In recent decades, however, research and treatment innovation for this disease have lagged. Thomas Flaig, MD, vice chancellor of research for CU Denver and the CU Anschutz Medical Campus, recently presented findings from a 10-year-long effort to study bladder cancer biomarker development and treatment.

We spoke with Flaig, a CU Cancer Center member, on the recent abstract that he presented at the American Society of Clinical Oncology (ASCO) Genitourinary Cancers Symposium in San Francisco.

Can you tell us about your recent study on bladder cancer treatment trials?

This is a trial sponsored by the National Clinical Trials Network via the National Cancer Institute (NCI) and the Southwest Oncology Group (SWOG) Cancer Research Network. We are looking at patients that have muscle-invasive bladder cancer, localized bladder cancer that has invaded the muscle of the bladder wall. Those patients are typically treated with one of two types of chemotherapy regimens prior to surgery, but there is almost no data comparing these treatments (gemcitabine and cisplatin versus the combination of chemotherapy drugs methotrexate, vinblastine sulfate, doxorubicin hydrochloride (Adriamycin), and cisplatin known as MVAC) head-to-head and no predictive biomarkers in regular clinical use in this setting to select the optimal therapy for an individual patient.

In this trial, patients are randomized to either one of those two acceptable chemotherapies, prospectively. We looked at the ability of two biomarkers to predict who would respond to chemotherapy. Because the National Clinical Trials Network is supporting this trial, we were able to collaborate with different institutions across the country on this trial in the follow up of the results.

What was the genesis for this trial?

Bladder cancer is a common cancer. It's more common in men than women, but it's the fourth most common cancer in men. There were very few new drugs developed for bladder cancer for 30 years, until this changed about seven or eight years ago. And part of that history was a nihilism to say, "We're not able to identify drugs, to test those drugs through clinical trials, and either integrate them or discard them." In the past, we couldn't complete trials to answer these questions.

That really changed in the last decade, particularly in the last seven or eight years. We've had a multitude of new drug approvals. This particular trial has been over a 10-year project for us to get to this point, and it just shows the challenges of clinical trial development and treatment development in general.

What were the notable findings from the trial?

There is very little prospective data on the use of those two chemotherapy agents in this setting – and there are few biomarker-driven trials in bladder cancer. The trial is fully accrued, and we have reported initial data for pathologic responses. In this publication, we reported the overall survival data in the context of the trial.

This first phase of the trial studied the biomarker known as the COXEN score (short for co-expression extrapolation score), originally developed by Dan Theodorescu, MD, PhD, the former CU Cancer Center director, and colleagues at the University of Virginia. The beauty of this biomarker is that it uses cell culture-related data initially, then goes through a correlation step, to humanize that cell culture data in a way to make it useful in a clinical setting. We hypothesized that COXEN approach could predict how an individual patient would respond to specific chemotherapies based on the analysis of an individual patient's tumor and the COXEN assessment.

The primary trial results had shown that the COXEN scores did not show statistical significance in correlation when applied to each of the treatment arms alone. However, we could predict pathologic response to chemotherapy among a pooled analysis of patients from both the Gemcitabine-Cisplatin (GC) and MVAC treatment arms using the marker for GC chemotherapy. Taken together, the GC COXEN score did show a signal of usefulness and prognostic discrimination in this phase two study.

What is next for this study?

We have now reported the first (COXEN) of four or five biomarkers planned to be assessed within this study. The other biomarkers (DNA, RNA and SNP-based biomarkers) will be evaluated using the tumor samples and clinical outcome data from the study. This is the valueable prospective dataset on bladder cancer, and one of only two of this type completed in recent times. It also finally gives us data on clinical outcomes with the actual chemotherapy which we are also reporting, although that's secondary.

What will the impact be for future physicians studying bladder cancer?

We have a lot of different therapies for advanced bladder cancer now. When you use an empirical approach to drug selection, which is the general approach now, you give a drug, have the toxicity for the patient, and then wait two to three months to see if the cancer is responding. There are a lot of downsides to a non-customized and non-personalized approach to treatment. Predictive biomarkers are a much more personalized approach and are the general direction we need to move in.

This study is a step in the maturation of bladder cancer research and treatment. In the past, the state of therapeutic development in bladder cancer was one in which it was difficult to engage patients, design trials and bring investigators together. Bladder cancer now is at a different place. There are many ongoing clinical trials and many have been completed. We now need to determine the optimal way to combine and sequence these new drugs – and how to best select patients for an individual therapy.

That has led to all sorts of therapeutic advances for patients, which is really the goal of all great science. The right clinical trial advancing clinical care.

How will this impact cancer research as a whole?

The beauty of these different approaches is that you have some expandability for use. COXEN, for example, is an approach, and this is a prospective way of assessing it. Other researchers could apply this to different tumor types, different cancers. This is a way of taking existing cell culture data and translating it over to a clinical setting. This is a phase two study as well, so it's not meant to be a definitive study, but one to give us a signal in different areas so that a phase three study could also be done.

We have been collaborating with several institutions across the county to do this work and now perform the follow-up assessments. With the COXEN work completed, many other investigators will have access to the data in order to make other discoveries and test additional biomarkers in this setting. I think it is a really good example of interinstitutional, team science. 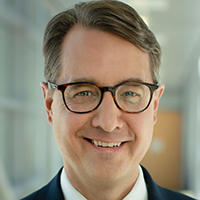