Pumping iron. Shredding guitar. Hiking the mountains. Working in information technology. For Shuvanzan “Shavvi” Dwa, the start of his 30s was a daily exercise in the things he loved. 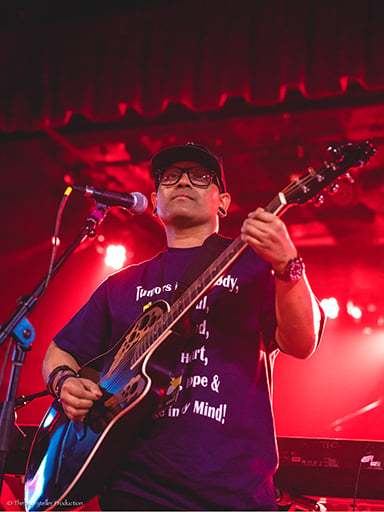 Shavvi Dwa performs during a recent gig in Denver.

Everything changed, however, when the young man began to notice a pain in his pelvis. The nagging ache persisted, and he figured it was a byproduct of weight lifting, possibly a muscle tear. One spring day while Shavvi was at home, the pain intensified and he suddenly experienced gastro-intestinal bleeding. He called 911 and within hours was diagnosed with a mass in his pelvis.

It turned out to be a rare form of sarcoma, and it was growing aggressively. “I thought, ‘No way, that can’t be,’” he said. “I was a fit guy. I ate a healthy diet. Didn’t smoke and hardly ever drank.”

The prognosis immediately got worse. The physicians at a south metro-area hospital administered radiation and chemo treatments. When Shavvi had a severe reaction to the latter, being left so weak he could barely walk, his family got the shocking news that his condition was terminal.

In a matter of days, however, he rallied and began to feel a bit better. Still, the prognosis he received from the physicians was bleak, and it continues to haunts him: You have weeks or possibly days to live, and we can’t do anything more. You should spend the rest of your days with your family.

‘This can’t be happening’

A friend offered a suggestion and, yet again, everything changed: “You should look at the CU Anschutz Medical Campus. They do research and clinical trials.”

He quickly got an appointment with Victor Villalobos, MD, PhD, director of the Sarcoma Medical Oncology team in the CU Cancer Center. Considering what Villalobos knew about Dwa’s case, “I was expecting him to be wheeled in,” the oncologist said, “but he walked in the room and looked super healthy.”

Leery after the serious reaction he’d already suffered from chemo, Shavvi initially opted to hold off for a month when he heard Villalobos’s recommendation for a chemo treatment. “At the end of June, Dr. V scheduled a scan and said, ‘It’s not as bad as when you were diagnosed, but the tumors are growing.” The sarcoma was in his liver and lungs. 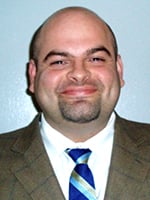 Villalobos put him on an intense regimen of chemotherapy, and the response was immediate. “The type of cancer he has is usually very resistant to chemo, but his behaved very differently,” he said. “He was literally like Lazarus, like he was resurrected. Shavvi had a dramatic response and was back to work, weight lifting and playing guitar soon after.”

That was two years ago.

Shavvi, who recently underwent yet another cycle of chemotherapy (cycles usually last five days), is originally from Nepal. He was the lone member of his family living in Colorado, but after the diagnosis in spring 2017, his parents and sister moved here from Houston and New York, respectively.

The many people thrilled to see his recovery include the fans of KasthaMandap, the local rock band in which Shavvi plays guitar and sings. In February, KasthaMandap (a historical reference to Kathmandu) opened a show for Nepal Idols, and in August, Shavvi performed as the solo opener for Bipul Chettri & The Travelling Band, a well-known Nepalese group, at Cervantes Ballroom in Denver. “When we get an offer for a gig and I’m not fatigued, I always say, ‘Let’s do it!’” he said.

When Shavvi checks in for periodic chemo treatments at University of Colorado Hospital, he spends his days working on his computer or watching TV. The extensive World Cup soccer coverage brightened one of his five-day treatment cycles last summer. 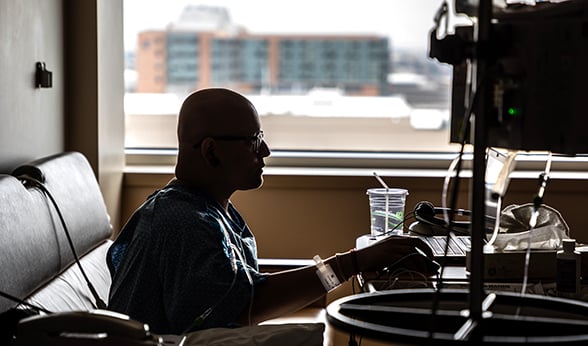 Shavvi Dwa works on his computer during a chemotherapy cycle at UCHealth's University of Colorado Hospital.

Lindsay Thurman, MD, assistant director of the oncology hospitalist service, said patients can get “pretty down from having to give up a week of their life, sitting in the hospital and getting chemo.”

But that’s not the case with Shavvi, she said. “He always rolls with it, always has a positive attitude. He’s easy-going and will let us know if something doesn’t seem right.”

Cancer Center patients receive multidisciplinary, one-stop-shop care. They see specialists in all medical disciplines at once rather than having multiple appointments. This coordinated care extends to the inpatient oncology service at UCHealth’s University of Colorado Hospital.

“Our goal is to ensure our patients get a consistent, clear message on their prognosis and treatment plan — no matter if they’re on the inpatient side or if they’re in the Cancer Center clinic,” said Thurman, who is also an assistant professor of Hospital Medicine in the CU School of Medicine.

Shavvi admits he’s had some ups and downs over the past two years. He recalls the shock of looking in the mirror after completing one of his first rounds of intensive chemo. “When you’re a body builder, you look in the mirror to see if your muscles are toning,” he said. “Everything tone-wise was gone in a month or so. I thought, ‘This can’t be me.’ It was really hard.”

Undeterred, Shavvi returned to his lifting regimen at the gym. Earlier this year, however, he eased off a bit when the lung tumor caused a bout of fluid buildup.

Mostly, though, he’s a good-natured, hard-working and hard-rocking guy. Shavvi always enjoys his interactions with Villalobos and the rest of his CU Anschutz medical team.

“I like the way Dr. V communicates. He explains everything really well,” he said. “If he decides to change medications, he explains what’s happening and why we should give it a try. It gives me a boost. It took a while for this all to sink in, but now, hey, I’m here and I’m able to do the things I love to do.” 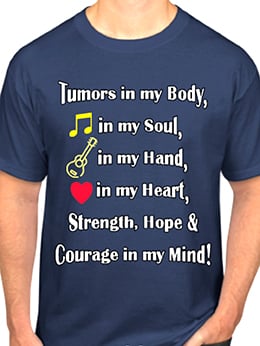 The T-shirt Shavvi designed for his concert performances.

Villalobos said sarcomas make up only 1 percent of all cancers. Although a cure has yet to be discovered for Shavvi’s sarcoma, the Cancer Center is constantly offering patients clinical trial options and the most cutting-edge therapies. “The center is bringing in national leaders on clinical therapy protocols,” Villalobos said. “We have internationally recognized programs for basically every cancer type.”

Villalobos will review how Shavvi responded to his last chemo cycle and then assess the next treatment steps. While developing cures for cancer is the ultimate goal, he said, “more likely we’ll be able to treat the disease and hold it at bay, essentially changing cancer from terminal to chronic disease like diabetes.”

With love in his heart, and strength, hope and courage in his mind, Shavvi, now 32, is the kind of patient who responds well to treatment. Sarcoma be damned. This #CancerWarrior is back to rockin’ and living life to its fullest.