“When I started working we used typewriters, carbon paper and mimeograph machines to make copies,” Deanda said. Sometimes she would have to walk the paperwork to another department, which was one of her favorite parts of the job. While her workplace has gone through drastic changes with the introduction of technology such as the computer and UCH’s 2007 move from Ninth Avenue to the CU Anschutz Medical Campus, her personal life also changed when she took over as her mother's primary caregiver.

Alice Deanda with Gary Brown, a colleague in the Department of Pathology. Photos courtesy of Lisa Litzenberger.

“I've always liked working at the university. I've never thought about going to work anyplace else,” she said. “As long as I can walk into work, I'm coming in. And I'm 75.” She also enjoys the 20-mile drive to work and has never found it difficult.

Deanda's coworkers all have overwhelmingly positive things to say about her.

“Alice is remarkable for her reliability, expertise and professionalism,” said Ann Thor, MD, chair of the Department of Pathology. “She is a joy to work with. We have enjoyed knowing her large family as well.” 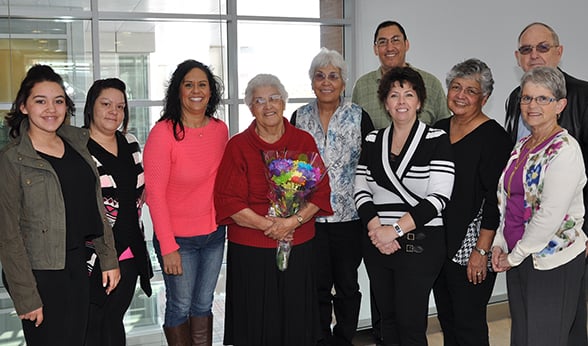 Alice Deanda is joined by colleagues for her 50th anniversary celebration at CU Anschutz.

“When I first started here as a student worker it was a very close-knit community,” Bilby said. “In the time she has worked for pathology and me, that same sense of community has always continued.”

“I like to brag that I've been around for 16 years in the Department of Pathology, but it doesn't even come close to touching the amount of time Alice has worked for (the university),” Bilby said.

Deanda found that it was difficult to get a promotion early in her career within a single department. “I kind of kept moving with the increase -- let's put it that way. If I could get an increase, I moved. Or, if I couldn't get one, I moved.”

In the last 50 years, Deanda has worked with many people and has seen coworkers come and go. She has been with the Department of Pathology longer than any other single department and is quick to make impressions on co-workers new to the workplace.

“I've only known Alice for the last couple of months, but she's a very warm and welcoming person,” said Rose Segawa, accounting manager. “I really enjoy working with her. We got along right away.”

Adapts to many changes

Deanda takes care of her mother, who is 93 years old and has dementia. Her sister, Josie Ponce, acts as a caregiver during the two days Deanda works at CU Anschutz. Other family members often fill in when necessary or to provide a break.

“In 2011 I moved my mother in with me because she wasn't eating and couldn't take care of herself anymore. She didn't have dementia at the time,” Deanda said.

Shortly after the move, her mother broke both hips. “From then on,” Deanda said, “her mind started to go, where she doesn't remember who people are, but physically she is very healthy.”

“The thing that I really appreciate, especially with this department, is that they are flexible in letting me work when I can. If my sister can't come to the house to take care of my mother, I can't come to work,” Deanda said.

Deanda's time spent at work are “the only 16 hours of her life that she isn't taking care of her mother,” Segawa said. “I commend her to be able to adapt to all the changes CU has gone through.”

Deanda said she is a “real Colorado native” and wouldn't choose to live anywhere else. When she isn't working, she enjoys cooking from scratch and spending time with her family, particularly on special occasions like Thanksgiving and New Year’s Eve. She also enjoys shoveling her own walkway when it snows.