CU School of Medicine Associate Professor Angelo D’Alessandro, who came down with COVID-19 in spring, spent much of the year studying the disease, examining how the virus attacks the body at the cellular level. His team’s research found SARS-CoV-2 damages the membranes of red blood cells, accounting for diminished resistance to stress of the cell that transports oxygen, offering explanations into why symptoms can linger.

Angelo D’Alessandro, PhD, flew around the country in January and February, giving lectures and conducting research. Little did he know, during a late-February trip in which he delivered two talks in New York City, he caught the virus that both defined 2020 and became a focus of his research into red blood cells’ response to stressors.

SARS-CoV-2 left D’Alessandro, an associate professor, Boettcher investigator and metabolomics researcher, quite ill for a couple weeks in March. It lingered in his upper respiratory tract and re-flared in early fall in combination with the wildfire smoke.

D’Alessandro, director of the Metabolomics Core of the University of Colorado School of Medicine’s Department of Biochemistry and Molecular Genetics and CU Cancer Center member, is young, 36, and otherwise healthy and not considered a high-risk patient. “There wasn’t enough testing around at that time, so the doctors told me to stay home and load up on Dayquil and Mucinex,” he said of his early COVID-19 bout.

Along with Columbia University researchers and colleagues in the lab of Kirk Hansen, PhD, director of proteomics at CU Anschutz, D’Alessandro had already started a study looking into how blood responds to stimuli, including intense exercise and other stressors. Amid the growing pandemic, they began examining blood in the context of coronavirus. They wanted to see if small-molecule signatures existed in the blood, signaling viral infection as well as providing insight into some of COVID’s symptoms, such as respiratory and inflammatory distress.

The oxygen-saturation level of COVID patients, especially those with severe cases, was prone to dropping to dangerous levels, even below 90%. “We asked the question: Can it be due to the cell that transports oxygen?” D’Alessandro said. “Can COVID attack red blood cells – the most abundant cell in the human body – which has evolved specifically to transport oxygen?” 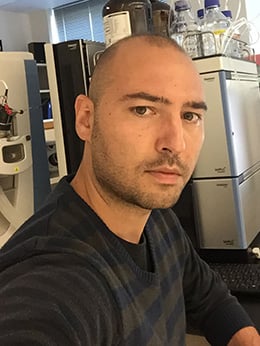 The answer to both questions was “yes.” The study revealed that SARS-CoV-2 damages the membranes of oxygen-carrying red blood cells. The virus didn’t affect the cells’ hemoglobin, which allow the cells to pick up oxygen, but it did damage membrane proteins responsible for blood cell structure, a characteristic that allows these cells to indirectly regulate red cell capacity to release oxygen and, most importantly, to squeeze through narrow capillaries in the periphery of the bloodstream.

“When the red blood cells are damaged, and you’re a COVID patient who is exposed to another stress – pharmacological treatment, high fever or, after recovering from the disease, exercise or something of that nature – then your red blood cell is more likely to hemolyze (rupture),” D’Alessandro said.

This explains why D’Alessandro, who jumped back into training for a late-summer marathon, noticed that more than a month after his initial COVID bout – two subsequent tests came out negative – he felt extremely tired just 20 minutes into a run.

“Something was happening in the red blood cells, and it’s why we believe that they are part of the problem in long-term COVID symptoms,” he said.

The lingering oxygen-level difficulties are explained by the lifespan of red blood cells. The cells circulate for up to 120 days before the body replaces them. To make room for hemoglobin, red blood cells have evolved to lose nuclei and organelles that allow other cells to replace damaged molecular components. So if the virus damages red blood cells, it will be up to four months before they are cleared and replaced with cells that do not carry such damage.

Need to get to critical mass

“You need to get to a critical mass of red blood cells that weren’t exposed to the virus in the first place for the long-term effects – at least those that relate to our red blood cells – to start to fade,” D’Alessandro said.

It took D’Alessandro two full months before he felt 100% again. He returned to marathon training in May. But COVID-19 wasn’t done with him, especially in combination with the historic wildfires and subsequent air-particulate clouds in early fall.

“Unfortunately, with my personal case, COVID can leave you with some long-term effects, like issues with the respiratory tract above the lungs,” he said. “You can have some inflammation of your airways. I’ve been dealing with that on and off in September and October … when we had the fires. I had two terrible months. I’m finally getting better now.”

Inflammation “can go off the rails”

D’Alessandro is also part of a research group, led by Ernest “Gene” Moore, MD, distinguished professor for the Department of Surgery in the CU School of Medicine, that’s studying pathologies that affect the capacity of blood to form clots in the context of trauma and shock.

Inflammation is a normal reaction to trauma. The immune system’s white blood cells rush to the wound site to fight off infection, and inflammation can affect the blood capacity to form stable clots – a phenomenon referred to as coagulopathy of trauma. In the case of SARS-CoV-2, the system “can go off the rails,” D’Alessandro said.

‘The body responds to the virus by generating

an excess of inflammatory cytokines,

which are small molecules that

“The body responds to the virus by generating an excess of inflammatory cytokines, which are small molecules that activate during inflammation, and then it can get out of control – a cytokine storm – to the point that your body shuts down, especially your lungs,” he said. “Unfortunately, like in trauma, excess inflammation can activate platelets and result in the formation of clots, which can obstruct blood flow in the lung and thus limit lung oxygen perfusion even when the patient is on a ventilator.”

The study into coagulopathic complications could pave the way for potential therapies, such as the use of pro-fibrinolytic agents, which break down clots.

D’Alessandro’s research this year also took him into the rarefied air of the Tour de France. He was part of a CU Anschutz-based team that examined the metabolomics and endurance capacity in 20 elite professional cyclists.

Also, the Italian native is among the researchers taking part in the major CU Anschutz biobank project known as the COVIDome. (For more on COVIDome, see the website.)

A forthcoming study from the group focuses on the inflammatory response to viruses called the kynurenine response. Because the molecule correlates to disease severity, researchers discovered they can measure kynurenine and predict future severity of a disease case – SARS-CoV-2, for instance – and whether a patient will develop severe thrombolic complications, such as dangerous blood clots.

“If you have a metabolomics platform that is affordable and efficacious enough that it requires just a single drop of blood – allowing the processing of thousands of samples per day in a robust and relatively inexpensive fashion – maybe it can be used in the clinic as a diagnostic tool,” D’Alessandro said. “That’s exactly what we’re trying to do and what we’re trying to establish at CU Anschutz.”