A CU Anschutz research team, experts in athletes’ baseline metabolic profiles and how these physiologies change during competition, are helping guide some of the world’s elite athletes to their best performances, including the recent Tour de France winner. Their understanding of the metabolic underpinnings of top athletes has implications for improved treatments of disease, including cancer, diabetes and Alzheimer’s.

To say cycling enthusiasts were stunned by the Tour de France performance of rookie rider Tadej Pogačar might be an understatement. Jaws dropped as the 21-year-old Slovenian, the second-youngest rider to ever win the Tour, ascended the final 5.9-kilometer final climb of the time trial and secured the yellow jersey. 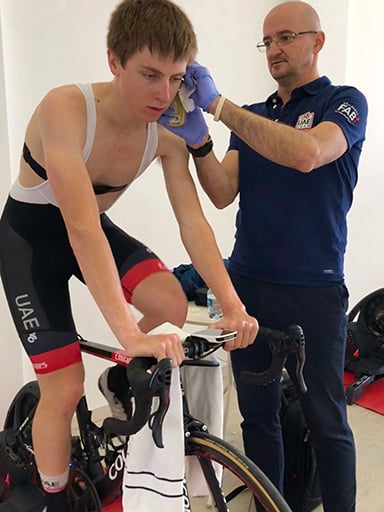 Tadej Pogačar, who won this year's Tour de France as

at the CU School of Medicine, is Pogačar's coach.

Pogačar’s victory, however, did not surprise Iñigo San Millán, PhD, an assistant professor in the Division of Endocrinology, Metabolism and Diabetes at the University of Colorado School of Medicine (SOM). His team at the SOM had already employed science – specifically the measurement of hundreds of thousands of metabolites in Pogačar’s blood (see recent paper) – and knew the young cyclist was on another level.

Their understanding of the metabolic underpinnings in top athletes has implications for improved treatments of disease, including cancer, diabetes and Alzheimer’s.

Podium as the goal

“Last year he was third in the Tour of Spain and won three stages there,” said San Millán, who is director of performance for Team United Arab Emirates (UAE) and Pogačar’s coach. “He was the youngest guy ever doing that, and this year he was stronger. For sure, he was a contender for the Tour (de France), and that’s what we had in mind.”

Going into the stage-20 time trial, the penultimate day of the three-week Tour de France, Pogačar trailed his compatriot, Primoz Roglic, by 57 seconds. Pogačar’s blazing time trial vaulted him past Roglic by 59 seconds.

In interviews following the time trial, which included grades of 8.5%, Pogačar told the media, “I guess my genetics are really good. I have to thank my parents, probably.”

San Millán may agree, but he also knows that being able to investigate Pogačar’s whole blood responses to elite-level exercise pays big dividends. San Millán, a former competitive cyclist, knew from Pogačar’s physiological measurements that the cyclist would benefit from staying off his bike for a week in May as he was already too fit and the Tour was still three months away.

Such insight is important because the Tour de France is considered the world’s most physically demanding race. “We’re talking about 5,000 to 9,000 calories of expenditure a day for 21 days,” San Millán said. “That’s like playing 10 football games each day for 21 days in a row. That’s why you need to have a very good recovery capacity.”

A new study performed by San Millán’s team, including Angelo D’Alessandro, PhD, an associate professor and director of the Metabolomics Core of the SOM, Department of Biochemistry and Molecular Genetics, and CU Cancer Center member, and Travis Nemkov, PhD, a postdoctoral fellow in biochemistry and molecular genetics and senior author on the study, examined the metabolomics of endurance capacity in 20 elite professional cyclists. 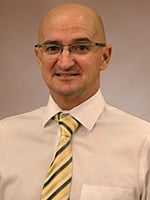 The study offers insight into the exceptional ability of team UAE riders – the team of Pogačar, now age 22 – to efficiently burn fuel and recover. The team collected blood samples from the cyclists and measured their metabolic parameters relevant to mitochondrial function, as well as use of carbohydrates, fats and proteins.

While in the current study they established the athletes’ baseline metabolic profiles and measured how these physiologies changed during a short, intense cycling test, CU researchers are also wrapping up a similar study on these cyclists’ physiology during the course of a multi-stage world tour. “From this information, we try to define what the upper limits of human physiology are ­– what’s the gold standard?” Nemkov said.

When the team compared the metabolic measurements of the various cyclists, the signature of a champion in the making stood out. “As the stages (in a race) become harder and harder, racers accumulate a specific subset of metabolites,” D’Alessandro said. “Elite riders have a metabolic signature, a unique phenotype, that makes their recovery much faster.”

Through the methodologies created by D’Alessandro and Nemkov, the researchers also could assess athletes’ capacity to burn fat, which allows them to preserve an all-important fuel – glycogen. 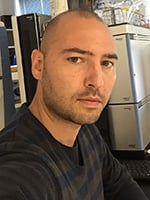 “The goal of the study was trying to understand, with more resolution, what is specifically different about the metabolism as your lactate-clearance capacity improves,” Nemkov said.

If researchers can better define the metabolic traits of fatigue, for example, they can more accurately measure athletes’ pre-race physiology as well as predict their susceptibility to injury.

The research is helping to inform personalized approaches to “exercise-as-medicine” interventions for other diseases and conditions, including cardiovascular and neurological disorders, and inflammation.

“Through the medication of exercise, we want to try to elicit changes at the metabolic and cellular level,” San Millán said. “Right now, there are very limited ways to quantify that. It’s why metabolomics has a tremendous future – it has a huge space. We should be able to see the metabolic signatures and what’s happening at the cellular level, and how a person with diabetes or cancer or a metabolic syndrome (e.g. obesity) is responding to exercise. And we can see how changes and personalized intensities (of exercise) and durations could help them.”

The use of metabolite profiles in the blood to monitor fitness and prescribe exercise regimens that can counteract specific diseases could be the “sabermetrics of the 21st century,” Nemkov said. Sabermetics is the analysis of baseball statistics to drive improved team performance.

Mysteries of the mind

An area requiring more study is the changes to metabolites that occur when a football player suffers a concussion. Blood markers are released in waves post-concussion, and the researchers can quantify the changes through metabolomics to improve monitoring of injury severity and recovery – either in the military setting or in popular contact sports such as football. 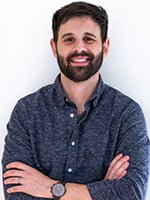 Also mostly uncharted territory is understanding how an athlete’s mental makeup – grit and calm when their body is being pushed to the limits – plays out on a cellular level.

“One thing we’ve found with riders who could ride longer with higher output and have better lactate clearance capacity is they appeared to potentially have some metabolic differences in neurotransmitter synthesis and recycling,” Nemkov said. “That goes back to the theme of what can we learn from molecules in the blood and how they associate not only with performance and endurance, fatigue and injury, but also potentially to your mental state.”

San Millán is well-connected worldwide among elite athletes, and his high-altitude training camps in Colorado regularly draw top-tier cyclists. Now, on the heels of Pogačar’s dramatic Tour victory, the spotlight is shining more brightly upon his team’s groundbreaking research.

The metabolomic platforms they’ve created are high throughput – able to run a large volume of blood samples in a short amount of time – ensuring that their insights will be in strong demand for the foreseeable future.

San Millán said metabolism has “been the poor brother” in medical research but is now becoming the “crown prince.”

“Everybody is stumbling upon metabolism (as an emphasis in disease study),” he said. “We’ve been criticized a few times for using elite athletes as a control group, but humans have evolved over millions of years to become athletes. It’s only in the last two or three centuries that we’ve become more sedentary, and that has been the intervention.”