The “Band Together” concert, a special gift from the chancellor to the CU Anschutz community during the 2020 holiday season, brought the talent of the choir and orchestra together for a little magic to end a difficult year. Two of the student musicians share how music and medicine mix.

For Deepa Trivedi and Duncan Davis-Hall, joining the “Band Together” winter concert – a collective gift from the chancellor to the University of Colorado Anschutz Medical Campus community – required little thought.

Their musical passion and team-player commitment inspired the pair’s participation in the virtual show aimed at easing the stress and disconnect of 2020.

Learn about the campus choir and orchestra,

part of the Center for Bioethics and

Offering holiday cheer and engaging their peers and professors in a year of pandemic-driven isolation strengthened the decision for the CU Anschutz students, despite their own end-of-semester stressors.

“It seemed like the perfect engaging event that could help us all at least have a similar experience,” said Davis-Hall, whose talent on viola rings clear from the concert’s first notes of “Carol of the Bells.”

“I just love being connected to other people on this campus,” said percussionist Trivedi, who provided the “bells” on a glockenspiel in the opening piece. “And being able to make music just means so much.”

Many people involved with the Arts and Humanities Healthcare Program in the Center for Bioethics and Humanities took part in the event, which highlighted the AMC Orchestra and Anschutz Campus Choir. The performance revealed the musical breadth and talent that can be found on CU’s premier medical campus and spotlights a common connection:

Whether for stress relief and sanity, discipline and focus, or creativity and caring, the marriage of music and medicine persists.

“It’s never been clear why so many medical providers like music, but it is very common,” said Chris Filley, MD, a neurology professor in the CU School of Medicine.

“Some people think it’s because of the commonality of ways of thinking – that scientific and medical reasoning resembles the order and structure of music. But I’m not sure that has ever been substantiated,” said Filley, a pianist himself. 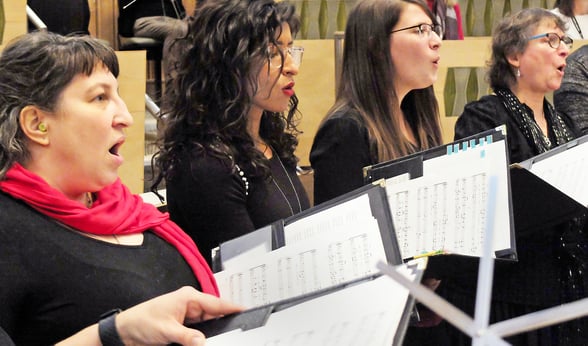 A more likely connection would be exposure in childhood, with the musically inclined often brought up in families that emphasize the humanities and a broad education, Filley said.

“My upbringing was really musical,” Davis-Hall said. “We always had music on in the house,” the bioengineering student said, noting that he took up the viola in fourth grade with the encouragement of his parents. “And my step-mom plays a lot of instruments: guitar, keyboard, the penny whistle.”

Trivedi began organ lessons just shy of age 5. She played percussion in elementary school and then high school, where – the Colorado School of Public Health student notes with a hint of pride – she was the only girl drummer in the band.

All three musicians say stress relief plays a big role in their music practice. “It can be cathartic,” Davis-Hall said. “I think that people who are in a stressful and demanding work environment, such as the medical field, need something like that. I know for me it’s a great way to unwind and a way to express a part of myself that I wouldn’t normally get to express.”

Trivedi joined the orchestra, in large part, because of the pressures of graduate school, she said. “When we meet on Thursday night, that is the highlight of my week.”

For Filley, playing piano for himself and his friends and family helps ease the emotional toll that caring for the sick and suffering all day can take on providers. “It’s very restorative to have an outlet like that, where I can enjoy myself with others and entertain people with music.”

“I think that might be another way that music and medicine intertwine. To get good at either of those things, you have to be disciplined and intrinsically motivated.” – Duncan Davis-Hall, bioengineering PhD candidate

Even when Davis-Hall doesn’t feel like practicing, he picks up his viola (and sometimes his bass guitar) anyway. “It’s like exercise. You don’t always want to do it, but you know it’s going to be beneficial for you,” he said, noting that medically focused people tend to be disciplined types.

“Sometimes I’ll practice my viola in a sort of fundamental, regulated way, trying to improve my technical skills. I think that might be another way that music and medicine intertwine. To get good at either of those things, you have to be disciplined and intrinsically motivated. And this desire for self-improvement underlies both.”

Practicing as a team toward a common goal, whether a successful surgery or a stellar musical performance, is another similarity between disciplines, Trivedi said. “If you look at the way medicine is practiced today, it is a very team-based approach,” she said. “You are working with a lot of other different specialties and different kinds of providers toward one end.”

Musical groups share an intense sense of camaraderie and dedication toward that end goal, Davis-Hall said. “We spend however many months just rehearsing and practicing, and then one night we perform.”

Acknowledging that his education largely spans the hard sciences as a doctoral student in the dual-campus Department of Bioengineering, Davis-Hall said analytical and creative thinking abound in both medicine and music.

“Most of what I do in the lab on a daily basis is very analytical, but there is a creative component. I create biomaterial substrates to grow cells on. I do bioprinting. So, I get to make things,” he said, relating it to his music practice. “It’s the idea of bringing something out of nothing.”

“The practice of medicine requires art as well as science,” Filley said. “Music provides a broader feel for humanity and the various ways that humans express themselves and how they feel and think. So, yes, it’s helped me be a better physician. And also a better human being.”

Fulfilling the desire to care

Providing happiness for themselves and for others is an overriding draw for playing music, the musicians agreed.

“I think the connection has to do with this mentality of caring for other people and for yourself,” Davis-Hall said, noting the bounty of research linking music and health.

“Medicine and science shouldn’t be divorced from the humanities,” Filley said. “There are so many important aspects of our humanistic life that pertain to medicine, and they help with enhancing the well-being of patients and of those who provide care.”

Especially considering the challenges of 2020, being a part of the special winter concert was a given for Trivedi and Davis-Hall, they said. “If we can all work together on creating an enjoyable and uplifting experience for other people, that’s really helpful,” Davis-Hall said. “It’s helpful for everybody.”