Strolling across the manicured lawn of the Denver Polo Club under a bluebird Colorado sky, Neil Box, PhD, walks his sun-safety talk. He wears a wide-brimmed Wallaroo hat, dark sunglasses and EltaMD sunscreen, while greeting the many attendees of the recent “Mallets for Melanoma,” an annual fundraising event for the Colorado Melanoma Foundation (CMF).

Box, associate professor of Dermatology in the CU School of Medicine, is an expert on UV exposure and the measures to prevent the sun’s damaging effects, especially here in Colorado, where the rate of skin cancer diagnosis well exceeds the national average.

“I like to say to people, ‘You only have one skin, and once you’ve ruined it, it’s ruined,’” says Box, also an assistant professor of epidemiology in the Colorado School of Public Health. “Everybody’s got a skin on them, and everybody’s getting sun damage.”

Box shows a guest a Colorado health creation – the Sun Bus – which in just a few months has rolled to the fore of the CMF’s community education efforts. A fixture at many of the state’s biggest summer festivals, the Sun Bus offers free skin cancer screenings and education, sun-safety products such as hats, shirts and sunscreen, as well as cutting-edge technology that measures hidden sun damage and shows exactly how sunscreen is covering – or not – your body.

Attendees of the "Mallets for Melanoma" fundraiser enjoyed watching polo matches on the grounds of the Denver Polo Club.

The well-equipped 40-foot-by-10-foot vehicle casts an impressive shadow – as well it should.

“That’s the beauty of it,” Box says of the bright-yellow bus. “It’s a big presence – highly visible. It gets people’s attention, and that’s what you need to do. We need to get people’s attention on this subject and get them thinking about skin health.” 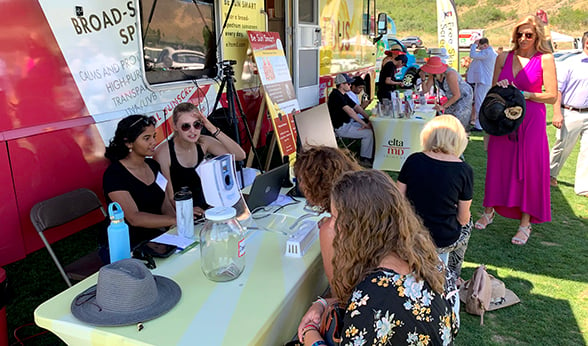 "Mallets for Melanoma" attendees get their faces photographed at the Sun Bus's reveal imager. Using polarized wavelengths of light, the imager reveals hidden sun damage in the skin.

The Sun Bus is playing a key role in the CMF’s awareness building, including in July, which is UV Safety Awareness Month. “Our bus is a driving billboard – a massive billboard for our project. Our partners, who have their logos on the bus, help steer money toward a cause that we know is important to our community,” Box says. “There’s a huge interest in having free screenings available.”

Since debuting at Denver’s Cinco de Mayo festival, the Sun Bus has been at events with a total of over 600,000 people. Also:

“These are big numbers,” says Box, CMF president. “The bus is having an impact.”

And that’s a good thing, he adds, because skin-cancer prevention efforts in the United States haven’t kept up with how treatment options have significantly “launched forward” in the last eight years. “In the screening and prevention space, we need to keep up with the progress the oncologists have made.”

The Sun Bus has a research component as well. Along with researchers in the CU Cancer Center, and assisted by interns from the Gates Summer Internship Program (through the Gates Center for Regenerative Medicine), and CU medical students and staff, Box is looking for genetic factors that make some people more susceptible to skin cancer.

Why Colorado is a burner

Colorado gets some of the highest UV exposure levels in the nation because of its altitude and average of 300 sunny days per year. Box said there are more UVA and UVB rays present in Colorado because of the state’s altitude.

Both UVA and UVB rays can cause mutations in the DNA and other kinds of skin damage, he said. “The nature of the problem here is that sun damage is higher than a lot of other places because the exposure you’re getting is that much more potent.”

Key measures to prevent sun damage are: limit your time in the sun; wear a hat, sunglasses, sun sleeves and/or a sun shirt; and use at least 30 SPF broad-spectrum sunscreen on exposed skin and reapply every two hours. For more information on sunscreens, follow the American Academy of Dermatology’s recommendations on sunscreen.

Researchers are age-, sex- and genotype-matching subjects from the Cancer Center’s cutaneous oncology clinic with non-melanoma subjects from the general community, he says, “and seeing if we can find better ways to capture the results of environmental exposures in relation to melanoma epidemiology and skin cancer epidemiology.”

Box notes there are more skin cancers than any other cancer type. In the United States, about 3 million non-melanoma skin cancers – such as basal- and squamous-cell carcinoma – are diagnosed each year. Melanoma, the deadliest type of skin cancer, is the most frequently diagnosed cancer in women in their 20s and 30s. In Colorado, 1,800 new melanomas will be diagnosed this year and about 140 of those patients will die.

“We’re above the national average for sure,” Box says. “We’re in the highest levels of UV exposure but states like Washington and Oregon get higher per-capital rates of melanoma than Colorado.”

Box hails from Australia, which has mounted successful public awareness campaigns about sun safety, resulting in significant improvements in skin cancer rates, and he’d like to see similar efforts occur in the States. Unlike other nations where governmental programs lead the way in raising awareness, “in the U.S. it has to happen through corporate money and finding alignments where (the campaign) fits the business partners’ strategy.”

The Sun Bus concept is the brainchild of Karen Nern, MD, a CMF board member and the Market Medical Director for Epiphany Dermatology’s Vail, Aspen, Breckenridge and Glenwood Dermatology clinics. The Sun Bus is sponsored by EltaMD skincare, the Cancer League of Colorado, Vail Health and other local stakeholders.

It’s gratifying to see people of all ages stroll up to the Sun Bus and learn habits that can lead to a much healthier future, especially here in outdoors-oriented Colorado.

“We need to get creative in how we bring these types of services to people. It’s about creating reasonable healthcare access,” Box says. “And it’s very appropriate that we are trialing a program like the Sun Bus right here in Colorado because of the sun exposure we get. It would be great to see similar programs emerge in the Southern states as well.”