Home News Can Climate Change Affect My Health? back to News

With an increase in weather-related disasters every year, Jay Lemery, MD, answers common questions about the intersection between medicine, health and climate change. The change in climate, which has been linked to Colorado's dangerous drought and more severe weather events, has been discussed as being possibly connected to the recent devastating wildfires in Boulder County.

Every day seems to bring news of another climate disaster.

This month, tornadoes ripped through eight states and killed at least 90 people. This year, Californians sought shelter from the heat while others hid inside to escape the respiratory effects of wildfire smoke. In Central America, agricultural workers die from chronic kidney disease brought on by increased temperatures. How big a role does climate change play in natural disasters? What are the health impacts? And how do medicine, health and climate change intersect? Is climate change a new medical diagnosis?

We asked Jay Lemery, MD, emergency medicine professor at the University of Colorado School of Medicine and a leader of the new Climate & Health Program. Lemery is also an associate professor of environmental and occupational health at the Colorado School of Public Health. This interview is edited for length and clarity.

Tell us about this area of medicine you are pioneering. Is our Climate Medicine program the first nationally?

Climate Medicine is a new term that we coined here at the CU Anschutz Medical Campus. The concept is to think about climate change and its impact on human health. So far, a lot of the responses have been very public health oriented. One of the things I became interested in is where are the clinicians in this conversation? Because we're not taking care of thousands of people, we're taking care of an individual patient. So that is the difference between clinical medicine and public health.

Our program is now housed in the CU School of Medicine and is designed for clinicians. We want to be the home of climate medicine and really build a patient-centric program around the issues of climate and health. It is a first nationally. We have no peers right now in the field of medicine. Most of the other groups that are doing this are schools of public health.

What is a climate doctor?

A climate doctor is a clinician who is savvy with issues surrounding climate and health. Climate doctors know how to weave the very complex narratives of earth science and roots of social vulnerability and have a sense of energy policy and some of the players in the field: Who's doing what at the national level? It also means understanding our own healthcare systems and what it means to decarbonize and to make a healthcare system sustainable and resilient.

A climate doctor is a doctor of any specialty that has knowledge and the ability to be an effective leader on issues of climate and health. There are so many different facets to it. We want to build a world-class educational program for future leaders to take advantage of the incredible opportunities that are going to come down the pike, whether through funding agencies; climate plans for hospital systems and academic health campuses; U.S. government agency research funding and even to some degree, regulations for decarbonization and resiliency.

To start, what are the drivers?

There are increased greenhouse gasses in the atmosphere, rising sea levels and warming temperatures.

Then, we think about the effects of earth science on that.

Let’s start with extreme heat. First of all, there's primary heat illness, and there’s heat stress on the physiologically vulnerable. If you have chronic obstructive pulmonary disease (COPD), or diabetes or heart disease, very hot days put a stress on those with chronic diseases simply because your body is working so much harder to generate sweat.

There are also extreme weather events. Downpours affect water quality, which can mean a degradation of potable water, which is a huge problem worldwide. The biggest cause of death for children under 5 is still enteric disease or diarrhea.

Then there’s drought and what that means for food prices and food security, especially in vulnerable places of the world.

Wildfires, which are increasing in duration and intensity, also affect much larger populations in the degradation of air quality.

We also see an increase in aero allergens. Ragweed and other allergic plants that give us bad pollen seasons are now increasing, and we're seeing this all over the northern latitudes and certainly in North America.

We’ve seen an increase in tropical cyclones, and the intensity of storms are much greater. On the Gulf Coast, we're experiencing larger storm surges, and more intense storms that are just more devastating to these communities and can also cause long-term displacement.

The rising sea level itself is a threat. If there is a storm surge, people living on the coasts are not going to be able to live there and will also have to move.

The ice caps are melting. The cryosphere. Parts of the frozen parts of the planet we know will be gone. There’s nothing we're going to do to bring them back, which will cause the sea levels to rise. What does that mean for the people that live on the coasts? Particularly those that have a livelihood in the coastal areas?

The 2021 United Nations Climate Change Conference recently wrapped up in Glasgow. What do you think about the collective actions taken toward fighting climate change?

Most of the smartest people that I've talked to and read have said it was a success, but barely. I think the pledges to reduce carbon are higher, but not enough. There are still parts of the carbon economy that has yet to be held accountable, which we know is just going to make the problem worse. There's been some good progress made on methane, which is the low-hanging fruit of the greenhouse gasses. It's shorter lasting than carbon dioxide, but it's 80 times more potent.

I think from our perspective, the really good thing about the conference was that health now seems to be one of the top priorities in terms of climate change.

We think that's going to be a major motivator for people to take notice and to change. We’ve had other meetings since then, and I think there's a general idea that forces are mobilizing: Funders are coming forth with more money, and the U.S. government has never committed to this degree before.

I think there is a reason for optimism in that we're going to have a lot of new action on this. My sense is that no matter what happens in politics, this issue is just too big to go back to the status quo or where we were two or three years ago.

What can each individual do to help with the climate crisis?

It’s not just that we want to be in a position to take care of our patients when bad things happen. The first rule of medicine is do no harm. So, we owe it to ourselves and our patients in our communities to look in the mirror and say we want to be part of the solution as well.

We need to hold our healthcare systems accountable because there are very few more intimate relationships with a business than a doctor-patient or healthcare-patient relationship.

Given what you know, is the damage done to the planet already irreversible?

A major threat is the melting of the ice caps. And it's absurd that the ice caps are gone under all circumstances in the next 200 or 300 years. That's a long time. We're not going to be around for that, but fate is sealed. And this is easy science. You melt an ice cube of fixed dimensions in a beaker, you can calculate how much the water level is going to go up.

We're looking at that and saying: Man, our coastal communities are going to be under tremendous stress. What does that mean for food security? What does that mean for the economy? And oh, by the way, where are these people going to go? Just look at what's happening now with the refugee crises around the world. You can just multiply that by a significant double-digit factor in terms of people who will need to move. So, these are really concerning projections.

Is there reason for optimism?

Yes. We know that there's still ample room for smart policy to really change these curves and make them much less. So, when the average temperatures increase in that 4-degree mark, we know all the earth-science projections go haywire. It's chaos. But if we can keep it to 2 degrees, we can say: OK, this is manageable. And we can have a little bit more of a sense of what that means for the environment. There's still huge room to change.

If we can reduce the reliance on fossil fuels, that is quite impactful. The rhetoric around policy makers is one of how aggressive we can be, as opposed to: Eh, this isn't that big of a deal.

The needle's moving. We're still very much in the driver's seat. This is not something we just have to wait and watch happen like a horror movie. As long as there's a chance for us to make a difference, then to me that equals hope.

What do you think of the Colorado weather this year? Is it strange that it’s only snowed once this fall?

Individual variances in a community don't necessarily equate to climate change. But if we look at the big data, we know the world is slowly warming. Average temperatures are warmer. The range of possibilities is much, much bigger because the bell curve of weather variances is increasing. I can't say that it hasn't snowed in Colorado because of climate change, but we know it's a great disruptor.

Katharine Hayhoe, our good friend at Texas Tech, calls it global weirding. And is this weird weather? I'd say it's weird.

Can you tell us about the Diploma in Climate Medicine program launching in fall of 2022?

The University of Colorado School of Medicine, building on the success of its Physician Fellowships in Climate & Health, is pleased to announce a new professional development program for healthcare providers of all specialties.

It’s meant to be a significant credential—a cumulative 300-hour diploma, broken up into five separate weeks, each week conferring a certificate. We know the clinical community is seeking opportunities to gain expertise in the many diverse and complex facets to climate and health—this will be that program. Specifically, focusing on core concepts: disaster response, healthcare system resiliency, energy policy and global themes. Each course will have cross-cutting curricula on leadership, communication and climate-justice.

It will be a world-class credential, and the University of Colorado is going to be the home of climate medicine. We're pretty thrilled about that. 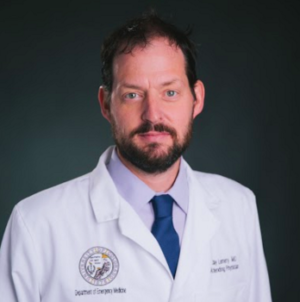