A decade ago, Ellen Smith went through the “traditional three” therapies for her lung cancer — radiation, surgery and chemotherapy — but still her cancer progressed to Stage IV and the prognosis was bleak. Her physician said he’d done all he could do.

Her three adult children did some online research and found the website for the CU Cancer Center at the Anschutz Medical Campus. Also, a former co-worker who performed research at CU Anschutz strongly suggested Smith visit the CU Cancer Center. “She probably suggested it five times, and that saved my life,” Smith said. “I say the Lord and CU Anschutz are a good combo, because they saved my life.”

Smith and many other multi-year survivors of lung cancer recently gathered with friends and family for a celebration at the CU Anschutz Health and Wellness Center. D. Ross Camidge, MD, PhD, director of Thoracic Oncology in the CU School of Medicine’s Division of Medical Oncology, said the Cancer Center recognized it had reason to celebrate — plus a compelling story to tell.

After survivors and their family enjoyed appetizers, dinner and cake — decorated with “And Many More” — along with appearances by the Rockies’ and Avs’ mascots, Camidge addressed the gathering. “We are celebrating the proof, demonstrated by all of you here, that long-term survival after a diagnosis of lung cancer is possible,” he said. “We are all here to show people that hope is real. It has a face and friends and family and a plan for next week and next month and next year.”

Survivors at the party had survived at least five years beyond their initial cancer diagnosis, but several had reached 10 years and a few even more. Others congratulating the group included Tom Gronow, chief operating officer at UCHealth; John Mitchell, MD, UCHealth’s chief of thoracic surgery; and Brian Kavanagh, MD, MPH, chair of radiation oncology.

The CU Cancer Center is the only National Cancer Institute-designated comprehensive cancer center in the state of Colorado. It is known for its personalized cancer treatments and its robust and diverse clinical research and clinical trials program.

Ben Smith said the treatment options, including clinical trials, made all the difference for his wife. “Early on, Dr. Camidge said it in the best, clearest and gentlest way: ‘If we proceed and work together on this, we’ll do everything we can do to put it to sleep. And when it wakes up we’ll do everything we can to put it to sleep again.’ He’s done it five different times; five different strategies.” 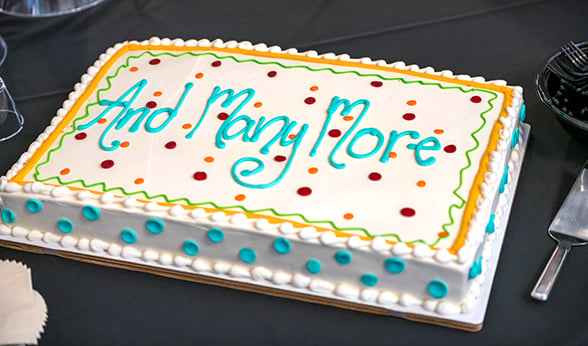 A cake offers an uplifting message for the many longtime lung cancer survivors at the party.

Gronow called the CU Cancer Center a gem that remains under-utilized in Colorado. “We have people who leave the state to seek care elsewhere, and I know in talking with many of you that you probably couldn’t fathom that, based on the experience you’ve had with the great team here,” he said. “It’s based on the foundation of Drs. Camidge, Mitchell and Kavanagh and a lot of other wonderful scientists who support the trials we do, the research we do, so that we can hopefully one day completely defeat cancer.”

Camidge said the lung cancer program’s success at the Cancer Center is attributable to:

Camidge said the Cancer Center has helped to either lead or contribute to “pretty much every major discovery in lung cancer disease in the last 10 years.” Given all the success Ellen Smith has had with her treatments — now a 10-year survivor (nine of those at the Cancer Center) — Camidge jokes, “Ellen has almost as many publications as I do.”

'I say the Lord and CU Anschutz are a good combo, because they saved my life.’ — cancer survivor Ellen Smith

Hank Baskett from Clovis, N.M., a seven-year survivor, was the featured speaker and his story and life-affirming message left the room with nary a dry eye. Baskett said he loves everyone at CU Anschutz. “I’m just saying that from day one, the staff, the hospital, the center — from top to bottom — everyone here I’ve met has been beautiful,” he said. “I love the people; I’m blessed.”

Baskett said the keys to fighting cancer, besides the incredible health care offered by the CU Anschutz Medical Campus, is to fight and keep living, to not bow to the diagnosis. He concluded his remarks by saying: “To the Cancer Center staff, just keep on doing what you’re doing. And to all you survivors, keep living. You’ve got all that life that’s left to be lived!”

One miracle at a time

Between bites of cake and chats with patients they’ve treated for many years, Camidge, Mitchell and Kavanagh took in the festive scene that, as they said, is “really inspiring and keeps us going.”

Camidge expects that such longtime survivor gatherings of CU Cancer Center patients will become commonplace in future years. He ended his speech with this message:

“To be clear: no one is pretending that we have beaten this disease …. But together — the whole clinical team, the hospital, the university and the patients and their families — we are changing the world, doing things that no one thought possible, making hope possible one person, one little miracle at a time.”