There is still a huge gap in knowledge when it comes to women’s health research. Judy Regensteiner, PhD, discusses the importance of studying women’s health and sex differences and focusing on recruiting more women for clinical trials.

Whether it’s dangerous side effects with Ambien or poorer heart health with type 2 diabetes, women often react to drugs and disease differently than men. Yet studies behind these sex and gender differences in medical science are still relatively scant.

In recognition of International Women’s Day (March 8), we spoke with Judy Regensteiner, PhD, distinguished professor of internal medicine at the University of Colorado School of Medicine and co-founder and director of the Ludeman Family Center for Women’s Health Research, about this research gap.

Regensteiner shared thoughts on where the focus lies for the future – including making the CU Anschutz Medical Campus a “go-to center in the country” for information on a women’s health and research.

Editor’s note: This interview was edited for clarity and brevity.

Women have long been left out when it comes to clinical research. What effects does this have on women today?

The fact that women have been left out of clinical studies, and really only started being included for the most part in the 1990s, has had a profound effect on how diseases are diagnosed and treated in women. And it continues to have that lasting effect. Lacking data on women in most clinical trials – until more recently – has meant that most treatments used today are based mostly on data from men.

We don't know if it matters in all cases, but it might. We need to know more about how to optimally diagnose and treat women.

Is it important to study men and women separately? Why?

I actually like including both men and women in studies at the same time. I think that's the optimal approach, and you learn more to impact health positively for both sexes, which needs to happen. The knowledge deficit is much more in women's health than it is in men's, but when you can include both sexes, you will learn more about both.

And that is a positive. Plus, you're making a direct comparison in a study using the same criteria to enroll people and to evaluate their responses.

Many diseases, such as diabetes and cardiovascular disease, affect women differently than men. And women still aren’t always equally represented in clinical trials. How does this affect women down the line? Are treatments not as effective for them?

I'll say that because the work hasn't been done, we don't know. The knowledge gap in women is really, really big. And nowadays, many more studies do include women, but because they didn't for so long, there is a lot of catching up to do.

One study that's probably clearest to refer to is with Ambien (zolpidem). Ambien is a sleeping aid, which was prescribed to both men and women in the same dose. And it emerged, just in the last couple years, even though the drug has been out there longer, that women reacted poorly to taking Ambien – they were more susceptible to the risk of next day impairment because they eliminate zolpidem from their bodies more slowly than men. And now, there's a separate dose for men and women – a lower dose for women. And it was really important to know that. How many other drugs could have a different effect of that magnitude on women compared to men? We just don't know. Again, many drugs probably work very similarly, so I'm not invalidating all the work that has been done. And yet there's a lot we don't know. Women are typically smaller than men, for one thing, but women are not little men, so there's just a lot to learn.

In what areas have we made the most progress in terms of “catching up” research to include women, where previously that research had included men only?

We haven’t. I would say that all the newer blood pressure studies definitely include women, and they make an effort to equally recruit, but a recent huge blood pressure trial called the Systolic Blood Pressure Intervention Trial, or SPRINT study, was supposed to be a trial to establish whether men and women should have sex-specific treatment guidelines. And they didn't recruit enough women for that study. So, the results were inconclusive as to whether the guidelines would be the same, or different, between men and women. It’s still unknown.

Is it harder to recruit women for clinical trials?

It is a little harder to recruit women for studies, and the reasons for that are probably sociocultural.

Often, women are taking care of their kids, or they are otherwise occupied. But you can recruit women, and women can be very interested in participating in trials. We just have to work harder at it.

What research areas are you most passionate about advancing, and why?

Well, my work is in the area of the cardiovascular consequences of type 2 diabetes. Much of my research, which is done in partnership with Dr. Jane Reusch, who is in the Division of Endocrinology has been done with both men and women. I like that approach, because I really do feel you get a wonderful benefit of learning more about both sexes. So, we look at sex differences. Type 2 diabetes causes such dire cardiovascular consequences to both men and women, but the consequences are worse in women than they are in men. It’s not completely clear why. Blood vessels are smaller in women, so they might get more blockages earlier, and diabetes leads to more plaque buildup in vessels, so there's a lot of physiology involved. And then there are some sociocultural differences, or gender differences, such as women with type 2 diabetes and heart disease don't get prescribed cardiovascular drugs or diabetes drugs as much as men.

If a woman goes to a heart doctor and says, "I'm having chest pain," she is still more likely to be told it’s because of psychiatric causes.

The Women’s Health Initiative is a really big, multi-centered trial that began in 1991. It showed a lot about women, such as some negative effects of estrogen in menopause, so people stopped taking hormone replacement therapy, and there’s a lot of controversy about whether they should have stopped and what the effects of estrogen are. Because of the fear that estrogen could cause some bad events, a lot of that research is not moving forward. So, those answers still need to be learned. It’s so complicated, but it’s striking how much work remains to be done.

My call to action is for young scientists, both men and women, to study women’s health and sex differences, because it’s a pioneering world, and it’s an exciting area of research. The downside of it is that we have so much yet to learn that we can’t give women the evidence-based medical advice we’d like to give.

What is your vision for the Ludeman Family Center for Women’s Health Research 10 to 20 years from now?

We want to become the go-to center in the country for information. Our center focuses on doing research in women’s health and sex differences, particularly in cardiovascular disease, diabetes and mental health, as it impacts physical health. But the other part of our mission is to train young MD and PhD scientists to be the workforce in that area. It’s a newer area – women’s health and sex differences research – and we want to be the leader in it around the country. We want to feed the field by training people.

We also want to be a source of information to the public about women’s health. I think the public deserves to understand what findings we have. So, we need to be out there sharing our knowledge. For that reason, the Ludeman Center is growing in its ability and in delivery of educational programs. I see that becoming a growing area of emphasis, for the public and for their healthcare providers. That way, women and men get the best in evidence-based medical advice. 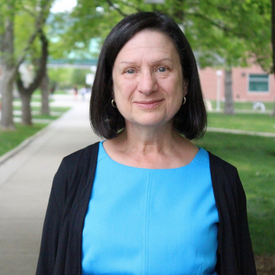