Amid spiraling costs, complexity and inefficiencies, the health care industry has reached an inflection point. It’s ripe for massive disruption.

Fortunately, the digital technology revolution is also on the rise, and it offers cutting-edge solutions to the problem. Digital health, remote monitoring systems and prescriptive analytics are just a few ways technology is intersecting with health care. Painting this picture were Richard Zane, MD, professor and chair of the Department of Emergency Medicine in the University of Colorado School of Medicine, and Kimberly Muller, managing director of CU Innovations. They presented the many ways the CU Anschutz Medical Campus is at the forefront of innovation and reimagined health care to about 50 members of the Metro Denver Executive Club at the Denver Country Club on Wednesday.

“What’s going to happen in the next two years, or 10 years, will fundamentally alter the way in which we deliver care, the way in which you get care, and the relationship of industry to health care,” Zane said.

After running through sobering statistics — health care costs the average American $10,000 per year (a total of $3.5 trillion), and medical error is the nation’s No. 3 cause of death — Zane showed the arc of technological advancement and noted that leading companies — Google and Amazon among them — are now putting health care in the crosshairs. By aggregating the barriers to care, wastefulness in the system and care outcomes, they are beginning to deliver solutions.

Richard Zane, MD, delivers a talk titled, “Can Innovation and the Digital Revolution Save Healthcare?” at the Denver Country Club.

Zane, who is also Chief Innovation Officer at UCHealth, noted that Google’s Verily has launched Project Baseline, which monitors everything about a person — respiration, heartbeat, reactions to environmental conditions, etc. Project Baseline collects so much data that it will create a new definition of a healthy human, he said.

But can the human brain interpret all of this data? “I don’t think so,” Zane said. “By 2025 knowledge is expected to double every 12 to 14 hours. The only way we’re going to deal with this is by partnering with machines. We have to figure that out: How we use data science, and how we can allow electronic medical records to help us.”

For example, technology offers promising solutions to the prescription-drug conundrum. Currently, a couple variables mainly factor into the drug a physician prescribes a patient, Zane said. They are: was this medicine effective in another patient I treated with a similar condition, and can I properly spell the drug’s name? Imagine, he said, if doctors instead could use a tool that easily culls prescriptive analytics from a patient’s electronic medical record. It would scour each person’s record, learn everything about the patient and match a drug to the diagnosis. “With the click of a button, we know the medicine that I just prescribed is not only the right one, but your insurance will cover it and the pharmacy has it,” he said.

As another example, he noted that UCHealth has successfully implemented remote care through technology. Using video uplink, sub-specialists based on the CU Anschutz Medical Campus deliver care to patients with tertiary illness in UCHealth’s Longs Peak Hospital in Longmont. “But what’s to prevent Amazon from having all the sub-specialists, or Google or anyone?” he said.

And what about soon-to-come 5G digital connectivity, which will further revolutionize the many wearable biometric-monitoring devices on the market? “It’s a game-changer,” Zane said. “Maybe we can develop a patch that costs $30 to make and lasts for three months. You put it on, collect all your biometric data. Then all of the sudden, like air traffic control, doctors will be able to see all their patients and figure out who does and doesn’t need care.”

Muller said the goal of CU Innovations is to take these game-changing visions and turn them into reality. She noted that venture capital is growing exponentially in health care, but a problem remains: Many of the advancements are occurring in silos, separate from the point of care within health systems. 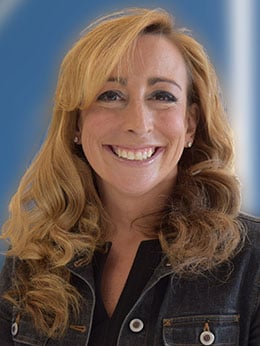 Kimberly Muller, managing director of CU Innovations, explained the importance of technology companies and clinicians working side by side, as they do at the CU Anschutz Medical Campus, to forge innovations.

Some research shows that as many as 95 percent of new health care technologies are never adopted in a clinical setting, she said. That’s where CU Innovations and the CU Anschutz Medical Campus comes in.

“We have the entire continuum — pediatrics all the way to geriatrics — and that broad system represents every setting in health care. We have an academic medical center, community hospitals, urgent care, clinics and at-home settings,” Muller said. “Imagine if we use this large system as a Clinical Validation Laboratory to test all of the technologies that Dr. Zane talked about. In fact, that’s what we’ve been building.”

The Clinical Validation Lab has received interest from hundreds of companies and is regarded as a national model for accelerating the transfer of world-class research and ideas to the marketplace.

“Now you truly have the convergence of technology companies coming together, working side by side with clinicians, to figure out how we get those adoptions (by physicians and patients) and turn that technology failure rate on its head,” Muller said.

She added that by studying every major vertical within health care — payers, device manufacturers, pharmaceuticals, etc. — CU Innovations has a holistic vision of the industry and understands how technologies can be best advanced.

“We continue to form partnerships with health systems around the country, so we can take the work happening here and scale it quickly, instead of the 20-year cycle that we’ve traditionally seen in health care,” Muller said.