A team of researchers from the University of Colorado Anschutz Medical Campus has received a grant to commercialize a miniature microscope that fits on the head of a mouse and can peer deeply inside the living brain.

The microscope, known as the 2P-FCM, uses an electrowetting lens mounted on the head of a freely moving mouse where a high-powered, fiber optic light can actually view and control neural activity as it happens. The lens is liquid and can change shape when electricity is applied. 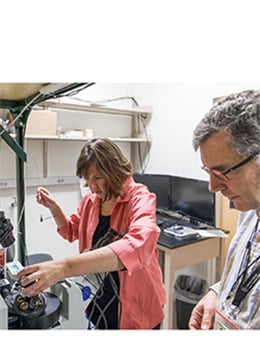 Emily Gibson and Diego Restrepo working on the miniature microscope that allows them to see inside a living brain.

“We can image deep into the brain which makes it very attractive to a lot of neuroscience researchers,” said Emily Gibson, PhD, assistant professor of bioengineering at CU Anschutz who helped create the microscope.  The initial demonstration of the 2P-FCM was published in Scientific Reports (Ozbay et al., 2018).

Gibson and her colleague Diego Restrepo, PhD, professor of cell and developmental biology at the University of Colorado School of Medicine, along with Karl Kilborn, co-president of 3i (Intelligent Imaging Innovations, Inc.) in Denver, won the $394,260 Small Business Innovation Research (SBIR) grant.

The microscope was first deployed to the University of Paris. Based on that success, it will next be used at New York University and Duke University.

The company 3i, founded by Karl Kilborn, along with Colin Monks, a former PhD student of CU Anschutz, and Abraham Kupfer, a former investigator at National Jewish, will produce the microscope. The company’s manufacturing efforts will be guided by Baris Ozbay, PhD, who helped create the prototype while working in Gibson’s lab and now works at 3i.

In 2016, Restrepo and Gibson along with Juliet Gopinath, PhD, associate professor in electrical, computer and energy engineering at CU Boulder and Victor Bright, PhD, professor of mechanical engineering at CU Boulder won a $2 million grant, spread over three years, from the National Institutes of Health (NIH) and the National Institute of Neurological Disorders and Stroke (NINDS). It was part of the NIH’s new BRAIN initiative aimed at revolutionizing the understanding of the human brain.

The money was partly used to optimize the microscope and deploy it in different neuroscience labs.

The device represents a breakthrough in the way scientists can observe brain activity. The microscope is attached to a thin fiber optic cable and mounted on a mouse’s head, allowing it to wander freely. Scientists can then observe complex neural processes within the brain.

“This can also be used to monitor brain responses to social and behavioral interactions,” Restrepo said. “To do that, you need an animal that is moving around and interacting with its environment.”

Kilborn, 3i co-president, said the goal of the BRAIN initiative was to ensure that new technologies developed academically made their way into as many laboratories as possible.

“This SBIR will help 3i disseminate the pioneering work done at CU Anschutz in the laboratories of Emily Gibson and Diego Restrepo, along with collaborators at CU Boulder in the laboratories of Victor Bright and Juliet Gopinath, which has also been funded, in part, by the BRAIN Initiative,” he said.  We are excited by the experimental potential of this new technology and believe the grant represents a positive example of how academia and industry can work together to advance research in neuroscience.”

The microscope will allow scientists to investigate a wide range of subjects.

“This microscope has been getting a lot of attention,” Gibson said. “The idea is to turn it into an easy-to-use commercial product and make it available to labs around the world. For me, that is what is most rewarding about this work.”