Home News Podcast: ‘You Have to Personalize the Miracles’ back to News

For Lung Cancer Awareness Month, Heather Smith and Melissa Turner share the stories of their cancer journeys. The women took very different routes to the CU Cancer Center and the world-renowned lung cancer care of Ross Camidge, MD. On this episode of the CU Anschutz 360 podcast, learn why they love everything about Dr. Camidge’s practice, especially the fact that he makes them laugh.

Melissa Turner had already survived two bouts of breast cancer, so the last thing she expected to hear in early 2018 after experiencing a series of mysterious symptoms was, “You’ve got lung cancer.”

“I was in this incredible shock,” she recalled. “I had never smoked, and (lung cancer) was certainly the last thing I ever thought was going to be the issue.”

Listen to the podcast:

Heather Smith was only 34 when she was diagnosed with stage 4 ALK-positive non-small cell lung cancer four years ago. In August 2019, the disease progressed quickly, metastasizing in her brain stem and causing violent seizures, one of which would have been fatal if not for the intervention of Heather’s spouse.

The two women took different routes to the CU Cancer Center and the care of Ross Camidge, MD, PhD, professor and director of thoracic oncology in the CU School of Medicine’s Division of Medical Oncology, but they are both now living full and rewarding lives. They are grateful to have the only National Cancer Institute-designated comprehensive cancer center in Colorado in their corner.

“I absolutely fell in love with him and his practice,” said Smith, who discovered Camidge after her fateful seizure. “He’s probably the best oncologist I could imagine.”

Plus, he tells a good joke, according to the women. “He makes me laugh,” Turner said.

Turner and Smith join Camidge on the CU Anschutz 360 podcast for a lively discussion about their individual cancer journeys and the advanced, personalized treatments they’ve received at the CU Cancer Center. Their chat coincides with November’s Lung Cancer Awareness Month. 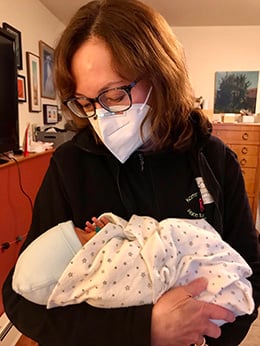 Just hours after recording this podcast,

Smith and Turner want people to understand the persistent misconceptions about the disease, which is the leading cause of cancer death in the United States. For one, smoking is not the only cause of lung cancer. The disease can strike anyone with lungs. Neither woman smoked. For another, no two lung cancer patients look alike.

Misconceptions also arise in the clinical care of lung cancer, according to Camidge. For more than a decade, Camidge and the CU Cancer Center have either led or contributed to several major discoveries in targeted therapies for lung cancer patients.

There is often the mistaken notion that lung cancer is one disease with one treatment for everybody. In fact, Camidge and his team have discovered many molecular subtypes of lung cancer, each demanding their own personalized, targeted therapies.

“There’s no one miracle for everybody. You have to personalize the miracles,” he said. “I don’t mind us being viewed as a little miracle factory. Little ones are OK. They add up.”

Speaking of little miracles, why is a photo of a newborn gracing this page? Well, you’ll just have to listen to the podcast to the end to find out.