Michael Holers, MD, the Scoville Professor of Rheumatology in the University of Colorado School of Medicine, was honored with the designation of Master by the American College of Rheumatology (ACR) during the 2017 ACR/ARHP Annual Meeting in San Diego. Recognition as a Master is one of the highest honors that the ACR bestows on its distinguished members. 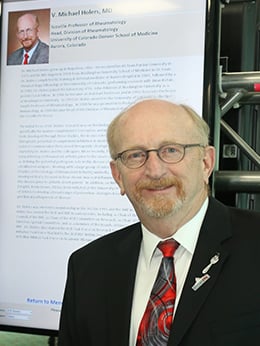 The designation of Master is conferred on senior ACR members who have made outstanding contributions to the field of rheumatology through scholarly achievement and/or service to their patients, students, and the rheumatology profession. Honorees have devoted their careers to furthering rheumatology research and improving clinical standards in the treatment of rheumatic diseases.

“It’s an honor to be recognized for my commitment to advancing research in the field of rheumatology that is focused on improving treatment and developing novel prevention strategies,” said Dr. Holers. “I am truly humbled to receive this designation and join the ranks of my distinguished rheumatology colleagues.”

ACR Masters must be highly accomplished individuals. Evidence of their achievements can come from many types of endeavors and honors, such as research, education, health care initiatives, volunteerism, and administrative positions. The Master must be distinguished by the excellence and significance of his or her contributions to the science and art of rheumatology.

Holers began his academic career at Purdue University and then continued as a medical student in the School of Medicine of Washington University in St. Louis. Following medical school, he was an intern and resident at Barnes Hospital in St. Louis and then a Rheumatology Fellow for two years at the University of Colorado. There he got his first research experience, discovering and publishing on the presence of nuclear antigens on the surfaces of activated cells. Following this introduction to research, Holers sought an intensive research training experience and undertook a wet bench postdoctoral fellowship at Washington University. Following successful conclusion of that position, he began his independent research career there as an Assistant Professor of Medicine and Howard Hughes Assistant Investigator.

For more information on each of these awards, and to view past recipients, please visit www.rheumatology.org/Get-Involved/Awards.