Jonathan Fox has the multidisciplinary experts at CU Anschutz to thank for diagnosing and repairing the stenotic valve in his aorta. He had a clinically severe diagnosis, meaning that without treatment he was in danger of a fatal heart event in just a couple years. Not even half a year after his open-heart surgery, Fox, a cycling enthusiast, is logging long distances and recording personal-best times.

Jonathan Fox happily entered his 50s with his identity, stress outlet and social life entwined in a heart-healthy activity – cycling – that would easily propel him into his golden years.

But at age 52, the unexpected happened: He had a “heart episode” in the middle of the night. He felt tightness in his chest and pain shooting into his arm and back. He went to Denver Health Medical Center, and doctors found no heart damage, calling the episode a small heart attack. Adding to the mystery was the fact that Fox was adopted, so there was no family history to trace.

“But they did an echocardiogram of my heart and they found, ‘By the way, you have this screwed-up aortic valve,’” Fox said.

The valve was a concern, but doctors advised Fox to monitor it and return annually for an echocardiogram. He learned that a disfigured aortic valve leads to turbulence, which stresses the valve leaflets and results in inflammation and a buildup of calcium on the aortic valve – much like corrosion inside a pipe.

“Fast forward three years, I had my annual echocardiogram in June (2020), and my doctor calls: ‘You’re now clinically severe. So, you can have the surgery, and health insurance will pay for it,’” Fox said.

Fox, now 55, had a stenotic valve in his aorta, narrowing the main arterial passage and blocking flow of blood into his body.

Reece could relate to Fox’s experience. As an endurance sports enthusiast, Reece had a heart attack at a young age, 44, in 2017. He immediately knew what was happening and underwent a procedure performed by Messenger, who installed a coronary stent.

“It definitely changes your perspective,” Reece said. “I try to make sure that people understand what’s going on.”

‘Fighting against that closed door’

Fox needed an intervention – and soon – because 75% of people with severe stenosis experience a fatal heart event within two years because the muscle simply wears out from “fighting against that closed door,” Reece said. “He was heading in the wrong direction.”

They considered a transcatheter aortic valve replacement (TAVR), which is the intervention in about 90% of cases similar to Fox’s. But Reece and Messenger, who are affiliated with UCHealth, discovered that Fox’s coronary arteries, which branch off from the aorta’s root, came off so low that a percutaneous valve insertion could end up covering the coronaries and result in a heart attack.

The multidisciplinary team advised open-heart surgery and placement of a bioprosthetic – the Inspiris Resilia Aortic Valve – which is made of bovine pericardial tissue and suited to patients’ active lifestyles and, unlike a mechanical valve, has no need for long-term anticoagulants. The bioprosthetic is relatively new technology, having been used by the CU Anschutz team for about three years. “It’s designed for young people that are going to need another intervention down the road,” Reece said.

Fox, who’d previously only had stitches, admitted to a lifelong fear of doctors and hospitals.

“But the heart attack in 2018 really lowered that phobia because I actually spent two nights in the hospital,” he said. “And then I went through all the pre-work for this – the tests, CAT scans, everything they put you through to make sure you’re going to survive this type of operation. All of the research and discussions were super helpful.”

Pre-surgery, he kept worrying: “‘What am I doing with the next 20 years if I can’t exercise, if I can’t ride bikes at the level that I used to? I’ll have all these friends who are leaving me in the dust. I was just a mess.”

He credits Reece and Messenger, along with their physician assistants and other specialists, with being “awesome, kind and understanding” in answering all of his questions. “They just really helped me get informed,” Fox said. “It was the only thing that got me over the fear of going in, because by the time I got there I’d asked every question that I could. So, I was probably 90 percent less terrified than I would have been otherwise.”

It also didn’t hurt that two of his cycling friends had undergone successful heart surgery in the past decade. One of them had open-heart surgery performed by Reece 10 years ago at UCHealth University of Colorado Hospital (UCH).

Surgery and the road back

Fox went in for his procedure at UCH on April 13, having accepted a new job the night before the operation. The seven days in the hospital after surgery were marked by extreme weakness and laboring to walk up and down the hall.

His new job started June 28, after several weeks of physical rehab resulted in a gradual strengthening of his body. Still, he was worried about his mental sharpness. “The first month I was a little foggy, but I sort of hit my stride now … I’m much more clear-headed because I know that I don’t have this, ‘Am I going to be normal?’ feeling hanging over my head. I’m now feeling like I’m pretty much normal.”

The team at CU Anschutz was amazing. I’m feeling better than I used to feel.

I’m coming back from rides and looking at the data going, ‘Wow, that’s the

Fox, now five months out from surgery, also feels he has turned the corner physically. “The team at CU Anschutz was amazing … I’m feeling better than I used to feel,” he said. “I’m coming back from rides and looking at the data going, ‘Wow, that’s the fastest time I’ve ever ridden that route.’”

Reece said the tissue valve lasts between 10 to 15 years for about half of patients. “For a 55-year-old (like Fox) we assume we’ll need to put at least one TAVR in there, if not two, down the road. If we can get 10 or 15 years down the road, we think that’s a huge success.”

Still, TAVR is a non-invasive procedure requiring just one night in the hospital.

Reece said Fox’s aortic valve, while disfigured, had the normal three leaflets on the valve. “He had some genetic predisposition for it; we don’t necessarily know why,” the surgeon said. “It’s not necessarily something he had his whole life. It just got worse over time.”

Fox’s active and healthy lifestyle definitely contributed to his quick and strong post-surgery experience. “It kind of speaks to how much his valve was holding him back before,” Reece said. “And now that he has an efficient valve, he can do so much more.”

While the first half of his 50s threw a few considerable bumps in the road, Fox is happy to see a longer, smoother road ahead. He will strap on his helmet, click into his pedals and traverse the landscape upon, of course, his bicycle. 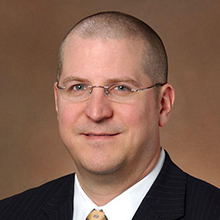 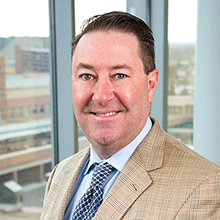