A CU expert offers guidance on facing emotional strains of a holiday season that again brings pandemic-related challenges and uncertainties.

The holiday season has always challenged mental health experts and their patients. Things like loneliness, depression and grief over lost loved ones don’t go away just because the ornaments and the mistletoe come out. In fact, they often get worse.

Add in the losses, complexities and emotional strain of an ongoing pandemic, and anyone making holiday plans right now could benefit from some guidance as the festive season nears.

Below, Emily Hemendinger, LCSW, MPH, of the University of Colorado School of Medicine Department of Psychiatry, offers expert advice for some of the toughest situations the holidays might present this year.

Although the numbers of immunized Americans are rising given recent mandates, more than 40% of the U.S. population is not fully vaccinated. Moral and political factors can make discussions surrounding the issue tense and add uncertainties to gatherings. How can people keep the happy in the holidays when friends and family members come from opposite camps?

“That is definitely a difficult conversation to have, but you are within your right to set that boundary,” Hemendinger said of anyone uncomfortable mixing with unvaccinated people.

First, enter the conversation with alternatives in mind, she said. Say: “OK, maybe we can’t do the big holiday dinner.” But think of something to do outside: ice skating, sledding, a hot-cocoa gathering around a fire. If the Great Outdoors are not an option, online gatherings are better than no socializing, Hemendinger said. “Maybe do an online Secret Santa exchange. Be creative. Make new traditions.”

Second, to help ward off acrimony, take a short conversation time out. “Before you react, pause and try to approach them with curiosity,” she said. “It doesn’t mean you’re accepting where they are coming from, but it is a way to get people to take their guard down and maybe have an actual conversation about their feelings or what is really going on instead of trying to be on the offensive.”

“If there is backlash and cutting of ties, that’s their choice. And that’s where, as hard as it is, you should practice ‘radical acceptance.’” Radical acceptance, a therapy tool, doesn’t mean you are giving up and resigning or agreeing with the situation, she said. “It means that you are choosing to accept what’s out of your control.”

Mental health has taken a dive for many people these past months in a nation where at least one in five citizens already lives with a mental health issue (National Institute of Mental Health). The holidays this year, especially if isolating, can be even tougher than usual. What’s your advice?

“The biggest thing is get support in any way you can. Go to therapy,” Hemendinger said, adding that everyone has “mental health,” regardless of if they fall into the official definition used in gathering statistics. “So, during this time, you might want to increase therapy, or you might want to start therapy. Or find people, not necessarily to dump all your feelings on, but with whom you can connect and feel validated and heard.”

The world is in a pandemic that’s killed well over 750,000 people in the United States alone. What’s your advice for families who have lost loved ones, to the pandemic or otherwise?

“I think that’s why the holidays are already hard for people. There are lots of people who have lost someone. That loneliness is only triggered that much more, because you are being told that this is the most wonderful time of the year, or a time of happiness,” she said.“Practicing self-care is important and allowing yourself to feel how you want to feel. If you are not feeling great, you don’t have to put on a happy face because people are telling you to, or you feel like you should. It’s important to not judge our emotional experience. If you are grieving someone, or if you are just feeling extra depressed during the holidays, let yourself feel that without judgment, in addition to getting support.”

What about the stars of the holiday show: the little ones? What if they have trouble accepting not seeing Grandma and Grandpa or having a different look to the season’s events?

“I think everyone being open about their feelings can help. Talk about the grief and allow kids to process that – and process some of the anger, even, that might be associated with it. I think it goes back to making new traditions, having something for the kids to look forward to, but also acknowledging that this is not ideal, and this is not going to be a forever thing,” Hemendinger said.

“I think the holidays are already hard even without a pandemic because there is so much stress around having the holidays look a certain way. I think trying to practice gratitude for what we do have and not letting the really high expectations of having a perfect holiday get in the way of being in the present moment with your family is what’s important.” 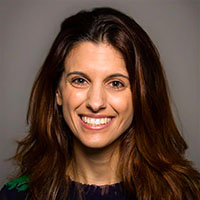