The day after Scott Ryberg lost his mother to lung cancer, the trail, as always, beckoned.

Running has taught him that life ebbs and flows, and the surest route to making it through the worst parts is putting one foot in front of the other.

Just a few months later, in October 2018, after a routine visit to his rheumatologist for an autoimmune condition known as Sjogren’s syndrome which causes dry mouth, Ryberg ran up against his own health scare. Doctors discovered oropharyngeal cancer, located at the base of his tongue, which had traveled to lymph nodes on the left side of his throat. Fortunately, it hadn’t spread beyond the throat.

His treatment plan was devised by Antonio Jimeno, MD, PhD, professor of medicine/oncology and otolaryngology, and Ryan Lanning, MD, PhD, assistant professor, radiation oncology, in the University of Colorado School of Medicine. 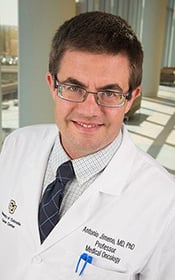 “Head and neck cancer and chemoradiation is probably one of the hardest things we do in oncology mainly because it’s the area of the body where we interact with the world – it’s taste, it’s swallowing – and all of those things get altered during treatment,” Lanning said.

In Ryberg’s case, however, it didn’t alter his drive to run for miles on end, often through the mountains. At the time of his stage 1 cancer diagnosis, he was as fit as a 56-year-old could be. He simply decided to lean into his “one-foot-in-front-of-the-other” philosophy harder than ever.

Jimeno talked with Ryberg about the treatment ahead – seven weeks of radiation and chemotherapy, made more difficult by his pre-existing autoimmune disease. “From the beginning, it was a challenging case medically, but we had a feeling he was going to do fine because of his motivation and his approach to problems,” said Jimeno, who is also director of the Head and Neck Cancer Clinical Research Program.

As part of the comprehensive approach to care, his doctors recommended he take part in Bfit Bwell Cancer Exercise Program – a joint initiative between the CU Anschutz Health and Wellness Center, the CU Cancer Center and UCHealth University of Colorado Hospital. The program is custom-tailored to cancer patients, helping them maintain strength and conditioning during treatment regimens. Ryberg was still doing plenty of running on his own, so Bfit Bwell added strength training while helping to decrease his fatigue.

Both Jimeno and Lanning say the program, which is pioneering at the national level, delivers phenomenal benefits for patients. “Very few places have a program as convenient as we do,” Jimeno said. 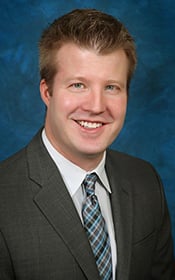 Lanning said when patients ask how much they should exercise during treatment, he recommends doing “whatever you’re comfortable with.” So, when Ryberg’s seventh week of treatment came around, when energy levels are typically at a low ebb, Lanning asked the runner how he’d been doing. “He’s like, ‘Well, over the weekend, I ran six miles.’ … He’s our benchmark for what we should all aspire to, whether we have cancer or not.”

While Ryberg had already logged several marathons, and in 2015 he completed a 29-day traverse (mostly running) of the 500-mile Colorado Trail, he was about to, post-cancer, embark on two of his greatest feats.

In early May 2020, a little over 14 months post-treatments, he heard about the Great Virtual Race Across Tennessee, a 635-mile race. Over 19,000 people representing over 40 countries signed up. They logged their running mileage on Fitbits, Apple Watches or other fitness-tracking devices.

The race began May 1, so Ryberg was already five days behind the field when he began logging miles.

“At first I had planned to finish at the end of July, then I thought end of June, and then, ‘Well, how about I finish around the last day of spring?’” Ryberg said.

He began running long days after the first week of June, and on each of six of the last seven days he logged over 20 miles. He finished the race on June 16, placing No. 530 to put him in the top 3 percent overall.

“I didn’t expect to do that well,” he said. “My doctors just say, exercise, exercise; it’s interesting what the body can do if you just apply yourself.”

Running Tennessee width-wise wasn’t quite enough, so on June 1, when the virtual Colorado Trail Challenge (CTC) began, Ryberg signed up, logging miles (his Tennessee and Colorado miles overlapped for two weeks) along with an ultra-marathoner friend as part of a two-person team.

They scorched the 500-mile virtual distance in just two weeks, obliterating the 92-team field. They each logged roughly 250 miles and finished June 14, with the second-place team finishing the race on the last day of June.

Ryberg likes to point out that he finished the 635-mile virtual race in less time than it took for his seven-week cancer treatment. Like running, the cancer journey was marked by periods of pain and happiness. “In my cancer treatment, sometimes the pain was extreme and other times I was really joyful working with my treatment team.”

Scott Ryberg and his wife, Rebecca, frequently hit the trail together. Scott says Rebecca played a huge role during his treatment and recovery.

He credited the entire team – receptionists, nurses, radiologists and speech and physical therapists – at the CU Cancer Center and UCHealth University of Colorado Hospital for his exemplary care. “I’ve never had doctors as good as Drs. Jimeno and Lanning, and I could just tell they care about their patients and trying to get them to the healthiest place possible,” Ryberg said.

‘I’ve never had doctors as good as Drs. Jimeno and Lanning,

to get them to the healthiest place possible.’

Rebecca Ryberg – “an angel,” he calls his wife – also played a huge role during his treatment and recovery. She monitored his caloric intake, helped maintain his weight, shuttled him to appointments, comforted him through side effects, and offered constant encouragement. “She was the glue holding me together,” he said. “All the love, understanding and emotional support she gave was instrumental.”

The doctors said Ryberg’s type of cancer has a cure rate of above 95%. “We’re lucky at (UCHealth) in that we have great support staff in our nutritionists, dieticians, speech and swallowing therapists – that’s again something that many places don’t have. And it’s all integrated,” Lanning said.

“It takes a village, and we have that village, also with specialized providers at every level (ENT surgery, radiology, pathology)” added Jimeno, who marvels that Ryberg’s slowest running times during his cancer treatment were still faster than his own best-ever mile. “This is the privilege we have (as doctors). We treat ordinary people in extraordinary circumstances, and sometimes the outcomes just exceed our expectations, and he was one of them.”

Thanks to his care, which also preserved his salivary glands, Ryberg’s physical function is no different than before the cancer. So, for Ryberg, it’s ever onward up the trail.

“I’ve always enjoyed running and being outdoors, so it came easy to me (during the treatments),” he said. “I’m fortunate I can run and process things in life. It’s been the key to my well-being through all my cancer treatment and being able to find peace with life.”