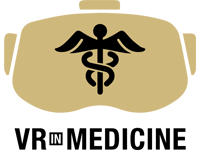 Editor’s note: This is the second in a periodic series of CU Anschutz Today articles focused on the potential of virtual reality technology in the medical setting. With its unique attributes, the University of Colorado Anschutz Medical Campus could lead the way in ensuring responsible and effective implementation of the gaming technology in health care.

Shuffling nervously back and forth as the perpetrator approached, unsure of the danger at hand, firefighter Zac Varela suddenly stilled. Regaining his focus, he raised his muscular arms and took a shooting stance, aiming directly at the culprit. Nothing happened.

Realizing he was unarmed, Varela restarted his nervous bobbing, when the perpetrator suddenly lunged. “Oh god,” he cried, as he fell back, his solid 6-foot, 3-inch frame nearly knocking a smaller crew member down as he struggled to regain his footing. “I need an ax or something.” But there was no ax, and no coworker who could help.

When Varela emerged from his virtual world, visibly shaken by the oversized spider, the generally clear-headed firefighter had gained a new appreciation of the power of virtual reality (VR). “I don’t like that spider,” he said, as his crew of colleagues, who had been watching his antics, laughed hysterically.

For Varela, the mission was accomplished. And while the first-responder demonstration of the gaming technology on the University of Colorado Anschutz Medical Campus proved humorous and entertaining for his fellow firefighters, the purpose remained serious.

[perfectpullquote align="full" bordertop="false" cite="" link="" color="" class="" size=""]“When I was on the street with that giant spider, as soon as I saw it coming toward me, I was unable to control my brain. I didn’t feel like I was in a videogame anymore.”  ̶  Zac Varela, firefighter[/perfectpullquote]

Not all fun and games

Between 2004 and 2014, three times as many law enforcement officers died by suicide than by all other occupational hazards combined. Suicide is now recognized nationally as the leading occupational killer of emergency responders, including officers, firefighters, dispatchers, paramedics and EMTs.

With the growing number of high-profile, mass-casualty incidents, and an unmet mental health care need for the community protectors, the threat is only rising. Using VR as an integral tool, ResponderStrong™, together with the National Mental Health Innovation Center at CU Anschutz, aims to reverse the deadly trend.

“When we recognize a true threat, we are good at adapting and protecting ourselves against it,” said Rhonda Kelly, ResponderStrong™ project manager and a former Aurora firefighter of 17 years. Whether it’s high-tech body armor for officers, advanced breathing apparatus for firefighters, or protective CPR gear for paramedics, agencies seek top-of-the-line protection for their employees.

“That’s part of the reason physical line-of-duty deaths are going down,” said Kelly, who led the demonstration with the Aurora Fire Department crew. “Now we recognize the leading occupational killer of first-responders is, in fact, suicide, and we haven’t trained our people to protect themselves against it.”

A lesson in reality

After exiting a virtual elevator and bravely traversing a barely 2-foot-wide plank 26 stories above a bustling city streetscape, Commander Hunter Hackbarth began strutting his stuff too much. 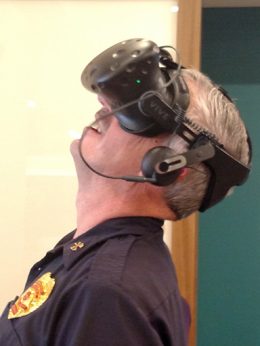 Commander Hunter Hackbarth gazes at the sky before his harrowing plank walk.

“Whoa,” Hackbarth yelled as he fell, his knees buckling before he hit the ground. “Am I in heaven now?” he joked after he recovered. The visually immersive VR experience can feel so real that it induces physiological responses, such as sweating, shaking and increased heart rate and respirations.

The reality of the virtual experience startles nearly every first-responder who tries it, Kelly said. Besides allowing displays of vulnerability and fostering camaraderie, the demonstrations are aimed at building buy-in to the more occupationally focused VR programs she and fellow innovators are creating.

“It’s called stress inoculation,” said Matt Vogl, who founded NMHIC to bring community-wide creative solutions to mental health care. “It’s exposing people to the bad thing before they actually experience it for real so that their brain has a reference point and is not completely in shock,” he said.

Numerous studies have shown the practice can lessen the impact of post-traumatic stress and reduce the likelihood of developing the disorder (PTSD), a chief cause of suicide for emergency responders and military personnel, Vogl said. “The Army has been using it for years.”

Many barriers block first-responders from adequate care, including a lack of access, resources and understanding by mental health providers of the responder community’s needs and culture.

After years of hearing repeatedly from the responder community that a crippling mental health scourge was going untreated, and talking with Kelly about the potential of ResponderStrong™, Vogl offered to support the program on a trial basis. It proved wildly successful.

Since leaving her firefighter job to take the reins of ResponderStrong™, Kelly has watched the group grow from about 30 to more than 500 first-responders and their advocates representing 300 agencies from across the state. Its members are passionate about breaking the mental-wellness barriers and reducing the wounds of their fellow responders, Kelly said.

[perfectpullquote align="full" bordertop="false" cite="" link="" color="" class="" size=""]“It’s exposing people to the bad thing before they actually experience it for real so that their brain has a reference point and is not completely in shock.”  ̶  Matt Vogl, NMHIC[/perfectpullquote]

“When you look at the responder occupation, there’s this whole perfect storm of factors that, when they come together, can really have a negative impact on responders’ physical and mental health,” Kelly said. Daily stressors, such as sleep deprivation, busy shifts, hyper-vigilance to sounds and no time to eat or hydrate correctly, decrease resiliency. 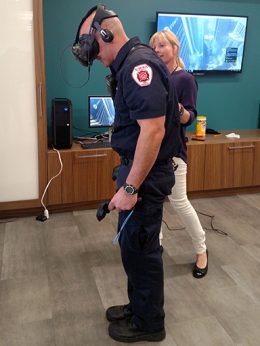 Firefighter Paul Cordova gathers courage before walking the plank 26 stories above the city.

“Then there are the stressors of witnessing other people’s traumas, not only the big crisis events, such as the Aurora theater shooting, or Columbine or the World Trade Center, but also the day-to-day exposures. How many drive-by shootings, how many suicides, how many dead kids can you see? We haven’t taught them how to manage that stress,” Kelly said.

A culturally-ingrained belief that any admission of emotional or mental impact is a sign of weakness increases the burden, which Kelly felt even more heavily as a woman in a male-dominated profession.

“When a woman admits she’s struggling, she runs the risk of being seen as weak,” Kelly said. “But not only is she seen as weak; she’s seen as representative of why women don’t belong in this profession.” The stigma harms both women and men, she said. “It reinforces the idea in men’s minds that, yes, it is weak, and if she can’t express it, I most certainly can’t express it. And it becomes a self-sustaining culture.”

With the planned inoculation programs, responders, attached to biometric sensors, will enter a noisy, dimly-lighted and unmanageable scene. As they begin to self-regulate, lowering their pulse and respiration rates, the lights will become brighter and the sounds clearer, allowing them to make sense of the situation and do their jobs.

Most other work-skill training that responders undergo is done repetitiously in a scenario-based environment. “The idea is to ingrain those skills down to the muscle-memory level so that in time of crisis, we will respond in exactly the way we need to and maximize a positive outcome,” Kelly said.

VR allows stress-management and mental health training in a life-like scenario, so responders can deploy those skills in the same way, she said, adding that other prototypes focused on an array of mental health needs will follow.

“The researchers we are working with have a lengthy history in the treatment of PTSD among veterans and responders inside a virtual-reality realm,” Kelly said. “We know that exposure therapy is widely recognized as the best treatment for post-traumatic-stress injuries, and VR is essentially exposure therapy on steroids. I really think it’s limited only by our imagination what we can accomplish with this tool.” 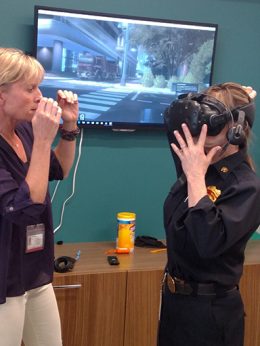 Rhonda Kelly helps Deputy Chief Cindy Andersen adjust her mask before she leaves the streetscape for her elevator ride.

“Look at that Z-pattern,” Kelly said, as she watched Deputy Chief Cindy Andersen put out a fire before using her jet pack to fly to another skyscraper. “Whoa, if I could only find another rooftop,” Andersen said, before Kelly asked her if she was nervous. “Oh my god, yes! I’m sweating like a pig!”

Varela, one of the few to visit Floor 666 on the virtual elevator, entering the land of monstrous spiders and knife-wielding clowns, told his buddies the initial flying section was fun and felt like a videogame.

“But as the stress got more intense, it was harder,” Varela said. “When I was on the street with that giant spider, as soon as I saw it coming toward me, I was unable to control my brain. I didn’t feel like I was in a videogame anymore. And when it lunged at me, I tried to jump back in the elevator and get against the wall, and there was no wall. That’s why I fell over.”

Varela and his coworkers agreed that VR could be a realistic immersion tool for first-responders capable of achieving the NMHIC’s goals. “That spider and that clown, they were messing with me,” Varela said. “I just want to go back in there and see if I can handle them better.”