First in a series: Two CU School of Medicine experts share what they know about the mRNA-based vaccines being used in the first phase of the nationwide vaccination campaign against the COVID-19 pandemic. By explaining the science behind the technology, the way viruses work and the long history of vaccine research, the researchers address fears, questions and misconceptions.

As a vaccine-focused researcher for 25 years, Ross Kedl, PhD, jumped at the chance to take part in a clinical trial for a new COVID-19 vaccination when it hit his medical campus. His faith in the science spilled over into his family, with his wife and two adult sons also joining separate clinical trials early in the attempts to end a worldwide pandemic.

SARS-CoV-2 has demanded his colleagues’ attention from research labs to hospital wards for just short of a year, and it has killed more than 425,000 Americans. Today, feeling grateful that he’s inoculated against the virus (he was not the placebo), Kedl enthusiastically puts his professor hat on to share his knowledge. It’s part of his job that he finds particularly important during the social-media era.

“I’m not sure how this got out there,” Kedl said regarding concerns that the two new vaccines being rolled out in the first phase of the nationwide vaccination campaign were rushed technology that could alter human genetics. “There’s nothing about these mRNA (Messenger RNA) vaccines that does anything to change your genetic information.”

Although Kedl, a professor at the University of Colorado School of Medicine Department of Immunology and Microbiology, and his colleague Assistant Professor Aimee Bernard, PhD, acknowledge they cannot unequivocally disclaim all safety fears about the new vaccines yet, they can offer their educated insight.

And that insight gives the pair confidence in the vaccines aimed at putting society back on a more normal track, they say. 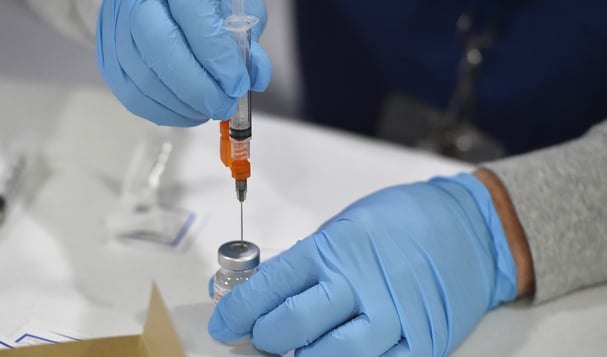 “But the coronavirus infection is pretty straight-forward. It’s pretty old virology, not a very sophisticated virus,” Kedl said of the infectious agent responsible for everything from SARS to MERS to the common cold. “Nothing about this virus suggested that making a successful vaccine would be all that difficult. That said, the mRNA vaccines have certainly over-performed expectations.”

The Moderna and Pfizer-BioNTech COVID-19 vaccines, the first issued emergency use authorization by the Food and Drug Administration in response to the pandemic, are both based on the use of mRNA to induce immunity.

“This type of vaccine technology wasn’t just started a year ago when SARS-CoV-2 was discovered,” Bernard said, noting that researchers have been using mRNA for everything from HIV and cancer therapies to Zika and rabies vaccines. And while newer to large-scale clinical use, mRNA as a vaccine platform has been well-studied in animal models, including primates, for about a decade.

Traditional vaccines use viral proteins or modified viruses manipulated in the lab and then injected into the body. The body recognizes the invaders as foreign and begins making antibodies in response. Later, memory cells (B-lymphocytes and T-lymphocytes) created as a result of the immune response to the vaccine recognize the invader, and B-lymphocytes release antibodies to halt the virus before it takes hold.

vaccine-related questions, from one shot or two to why do I feel so sick?

With mRNA technology, the body becomes the lab. “It’s kind of the ultimate bio-hack,” Kedl said. “Rather than make the vaccine outside of the person, we provide the information for the vaccine, and then the person’s muscle cells take up that information and make the protein and basically create the vaccine on their own behalf.”

If it rings of science fiction, it’s not as scary as it sounds.

“A virus does the exact same thing,” Kedl said. “The virus can’t do anything on its own. It’s got to get inside the cell and steal the machinery of your cells. But unfortunately, the virus has a whole lot of pathology associated with it: all sorts of damage and infectious processes that literally cause death and destruction. The mRNA vaccine doesn’t,” he said.

“So even though this is a relatively new platform for vaccines, the nature of the immune response that they elicit is the thing we’ve been studying for decades.”

Bodies naturally use highly fragile mRNA continually to make protein. “Because it (mRNA) is fragile, it’s very quickly degraded by different enzymes in our cells,” Bernard said. “So, my biggest concern when I first heard about these types of vaccines is that they were going to be injected into our body, and that they were going to be degraded so quickly they wouldn’t even have enough time to work.”

Scientists overcame that issue by protecting the mRNA with a lipid nanoparticle. “It’s really just an oily shell,” Bernard said. “The cells in our bodies have similar lipid coatings. With both of these vaccines showing outstanding 94%-plus efficacy rates, it appears the mRNA is being used quickly enough to do its job.” For comparison, the seasonal flu vaccine usually rates between 40% and 50% efficacy.

“So even though this is a relatively new platform for vaccines, the nature of the immune response that they elicit is the thing we’ve been studying for decades.” – Ross Kedl, PhD

“The mRNA in the vaccines is probably being degraded very quickly after it’s used,” Bernard said. “So, this type of technology (which never enters the cell’s nucleus) is not going to be living in your muscle cells for probably more than a few days,” Bernard said.

Technology could be a ‘game-changer’

“Are there any long-term effects? Obviously, we won’t know until we have more time to look at it,” Bernard said. “But I would think that would be highly unlikely.” However, Bernard said she considers concerns aired in some media formats about the new vaccines potentially causing fertility issues as unsubstantiated. “I am not aware of any scientific basis for that whatsoever.”

Kedl reiterated that, while the vaccine platform is comparatively new, researchers have 100-plus years of collective experience evaluating the long-term consequences of vaccination. “And that consequence can be succinctly summarized: immunity,” he said.

Within hours of getting his Moderna vaccine during the Phase 3 clinical trial held on the CU Anschutz Medical Campus, Kedl said he knew it was not a placebo because of the immune-related side effects after injection. Those effects, from fever to body aches, indicate that the virus is working, said Kedl, who not only has faith in the vaccines. He believes the mRNA technology is a breakthrough.

“The biology of the virus and my familiarity with vaccinology made it very clear to me early on that any of these vaccines were going to be both safe and probably very effective. I had no idea that they’d be as effective as they are. It’s revolutionary. Messenger RNA vaccines are a game-changer for sure.”