Home / News / Room with a view

Tucked down a quiet hallway on the fourth floor of Education 2 North, a room nearly overflows with vintage artifacts. Starched, floor-length uniforms that look more like gowns highlight the assortment of nursing relics, from 19th-century class pins and yearbooks to antiquated textbooks and medical instruments.

Inside, intern Brittany Huner scours through boxes of documents, photos and other memorabilia, keeping the artifacts preserved and exhibits updated. For her, the “hidden gem” on the University of Colorado Anschutz Medical Campus serves as a stepping stone. But for visitors, the Nursing History Center provides an invaluable connection to an impressive past. 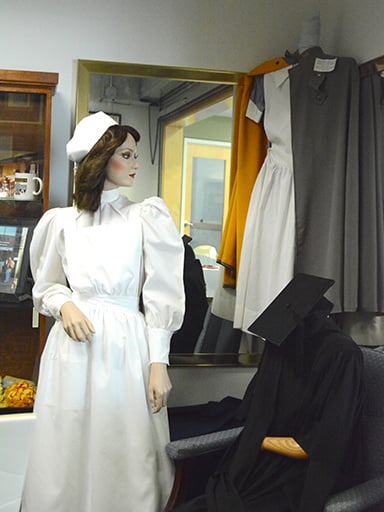 Traditional nursing uniforms are part of the many items on display in the Nursing History Center.

“I didn’t know how big of a deal the CU nursing school was,” said Huner, a recent CU Denver history graduate (MA, ’18) who has maintained the center for more than a year.  The collaborative internship through the CU Denver Public History and Preservation program provides a unique experience for her and an important resource for the College of Nursing (CU Nursing), she said.

Connecting to the past

“It’s good for the modern students to understand how much their field has changed and where it comes from,” Huner said, noting the pioneering efforts of alumni standouts such as Loretta (Lee) Ford (EdD, ’61) and Jean Watson (PhD, ’73), whose work at CU evolved into the profession-changing nurse practitioner model  and “Theory of Human Caring,” respectively.

Through tours, now offered on a walk-in basis on Fridays, the center also draws alumni back, Huner said. “They’ll say: ‘Oh, I remember wearing these uniforms, or I remember using these tools.’ It gives them that real solid connection with the school.”

Many courageous women helped trail blaze the profession from the halls of CU, including former Dean Henrietta Loughran, her work part of Huner’s favorite exhibit. After Pearl Harbor, Loughran leveraged connections and quietly transferred U.S.-born nursing students of Japanese immigrants (Nisei) to CU to finish their education and avoid internment.

“That is a really unique part of the school’s history,” said Huner, who also helps callers find information and old photos for projects. “We actually have some scrapbooks from several of the Nisei students.”

In 1964, after she and fellow public health nurses found themselves serving the mountain towns and rural areas of Colorado alone without appropriate training, Ford began developing a nurse practitioner model. “There were no other health professionals in these rural areas,” said Ford, 97. 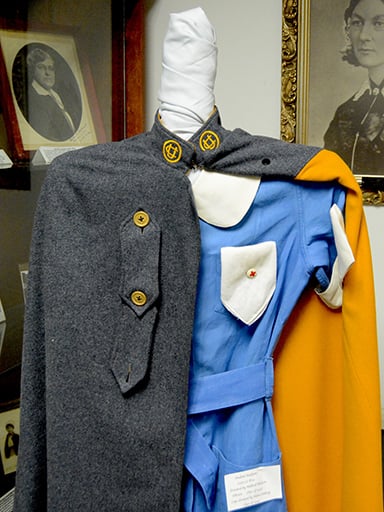 Items on display in the Nursing History Center include garments, documents, photos, artifacts and other memorabilia.

“The goal was to test out a more clinical nursing role and then integrate it into the major curriculum,” she said. Until then, master’s-prepared nurses served only in “functional roles,” such as supervisory, teaching or administrative, Ford said. “We were preparing clinical specialists in our particular areas of expertise.”

Despite fierce resistance on many fronts, Ford, with the “energy of the students” and the “enthusiasm of the patients,” persevered, her model now a standard practice in many specialties worldwide.

Past lessons ‘set stage’ for future

Social and political barriers also confronted Watson in her efforts a decade later to reshape the profession. “My challenges were really to give voice and language to nursing, which is often invisible, particularly in an academic major medical center,” said Watson, 78, whose research at CU led to the caring theory now used in teaching hospitals and medical centers worldwide.

Watson, who served as dean, established the Center for Human Caring and helped establish the first doctoral program and clinical doctorate while at CU. “She’s one of our biggest alumni names,” Huner said, adding that the center has boxes of Watson’s papers and awards from around the world.

As CU Nursing celebrates its 120th anniversary this year, Huner hopes more people will take advantage of the center, especially students. “There’s a lot of neat stuff that I don’t think students really know or get to learn about showing just how much the field has changed,” she said. “I think it sets the stage for future improvements in the field.”