Colorado native Jeremy Bloom has “lived both” his dreams in skiing and football. His accolades speak for themselves: a three-time World Champion, two-time Olympian and 11-time World Cup gold medalist in skiing, and drafted in the fifth round by the Philadelphia Eagles. Bloom is the only athlete in history to ski in the Winter Olympics and be drafted into the NFL, and is the youngest member ever inducted into the US Skiing Hall of Fame. 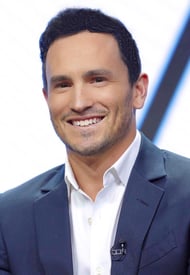 Today, he is founder/CEO of Integrate, a marketing technology company, and founder of Wish of a Lifetime, a nonprofit that grants lifelong wishes to senior citizens.

But Bloom and many other current and former athletes are often forced to live in an environment where any perceived “weakness” needs to be buried. After his skiing and football careers, Bloom became a passionate advocate for Olympic athletes to have access to more mental health resources and to break the stigma surrounding mental health.

Bloom will discuss “shredding the stigma” athletes face on mental health when he keynotes the Helen and Arthur E. Johnson Depression Center’s Ninth Annual Luncheon on Nov. 1. The Center is dedicated to improving the lives of people with depression and mood disorders.

Bloom spoke with CU Anschutz Today about his journey with mental health and why he is determined to destigmatize the conversation.

Today: As a former Olympian and World Cup skier, especially making the US Ski team at such a young age, how did you personally manage the stress and anxiety of those events? And how did you kind of like learn to manage that from your Team USA teammates as well?

JB: I was really nurtured in an environment where weakness or depression was weakness –whether it be a football team and a football coach or not wanting to show any cracks in the armor in front of an Olympic team coach. So I worked really hard to hide any emotions other than “strengths” outwardly to my coaches. That was just normal for me – that became normal. And to reflect back, it's just not the way I think it should be.

Depression, anxiety, thoughts of suicide – they don’t discriminate. Depression knows no boundaries, and we're all in this together.

And granted, there definitely is something to the mentality of like, “Oh, you're hurt, well put some duct tape on and let's roll.” You know, like that's how I was raised. And I think it builds resiliency. I think it builds tenacity. I think it builds grit. All three really important qualities to have success. But at the same time, you’ve got to check it, you’ve got to be able to check in. Coaches should be able to check in with their athletes in an environment that's disarming and is nonjudgmental. And I never had that. I never had that. I mean, I really tried to hide any kinks in the armor.

Today: Is that what led to your experience and wanting to be involved with The Weight of Gold (an upcoming documentary that takes an in depth look at Olympians and mental health)?

JB: Partially my own experience. But the bigger influence on my life that drove me to participate in this film was my relationship with Jeret 'Speedy' Peterson, who I grew up skiing with. He was first a moguls skier, then he became an aerialist. Really successful guy, Olympic silver medalist.

And I recall like it was yesterday, a time when we are in Lake Placid for a World Cup. Staying at the Olympic Training Center, it was well into the night, and I got a knock on the door and it was Jeret. And I could tell something was really tearing him up. And he said, "Hey, can I chat with you?" I said, "Of course.” So we went to the TV room in the Olympic Training Center and you know, he just kind of lost it; how depressed he was, thoughts of suicide, and how he struggles with all these things.

I was not equipped. I had no idea, absolutely no idea how to respond, the right questions to ask, what it meant. I just, you know, I just kind of chalked it up to like, “yeah, we all go through tough times, and he's going through a little bit tough of a time.” But you know, for whatever reason I didn't see it as a red flag and I should have. I've always kicked myself for that. Not seeing a red flag and trying to do more, and be the person that I think he needed me to be in that moment. And then of course, you probably know he took his life.

And so it was really my relationship with Speedy and that situation. I had a lot of regret, how I handled it, and I wanted to get smarter on the topic and just try to do whatever I could to contribute to destigmatizing this thing as much as we possibly could.

Bloom competing in the 2006 Olympics in Torino, Italy.

Today: Given that you were naturally good at skiing and football, how did you manage your setbacks and stresses when you were faced with your own personal expectations? You seemed to address some of this in your book, Fueled by Failure.

JB: The mission of that book was really to destigmatize the inevitable moments of failure that anybody goes through. You know Michael Jordan was cut twice in high school. Steve Jobs was fired from Apple, a company he started. Walt Disney was fired for a lack of imagination at his first publishing company. So that doesn't matter who you are, how good you are, how successful you are, we will all fail at something along the way.

And I had heard growing up from countless coaches and mentors, "Hey, well losing makes you stronger.” You know, failure can make you strong. But, but I wanted to know how. I wanted to know how Michael Jordan dealt with getting cut twice in high school, and still have the confidence to continue playing. Or why Steve Jobs started NeXT or Pixar when he could have just dug a hole and buried himself in it.

It was a tremendous journey, not only sharing anecdotes of my life, how I've used kind of the inevitable setbacks to recalibrate the compass, but really diving into others. Their psychology of “how do you handle these moments?” Because they really are the defining moments in everybody's career. Because everybody hits that “rock bottom." And you figure out how to get back up and out, and you get stronger for it, or it completely paralyzes you. And you give up and you never realize whatever that could have been. So that really was the purpose of the book – more of a self-discovery into the topic, and I learned a great deal.

Bloom scoring on a 94 yard play against Kansas State in 2002.

Today: Enrolling at Wharton (University of Pennsylvania School of Business) seemed to be a turning point for your life after sports. How did you manage that transition and did anything change in terms of that response to failure or how you frame life’s challenges ?

JB: Wharton was without a doubt the bridge that allowed me to cross over from being a professional athlete into a new world of business and nonprofit. Peter Lenmen, a professor at Wharton and still a great friend and mentor, was a huge influence on my life and a big reason why I wanted to get into tech. And it really happened to me at a time in my life where I was scared. Oh my gosh, was I scared. I lived this unbelievable life up until about 26, 27 where I lived both my dreams. I was an Olympian and drafted in the NFL, and living large. And I'm like, OK, this is going to be over pretty soon. What in the world am I going to do next? What's the encore look like?

So yeah, that was a big turning point. And getting that degree at Wharton in entrepreneurship helped me in countless ways in the journey of what was next. And even things like raising capital. In my first round of funding at Integrate, we raised $4.5 million. I talked about the experience of Wharton. I didn't want to be the token football player that had no idea how to start a company. Now we've raised $75 million, and it opened a lot of doors for me.

Today: How can the stigma of looking for help in mental health be reduced or even eradicated in the general population, as well as from your experience within the realm of athletics?

JB: I think we've made a lot of progress in the last couple of years and it's the big testament to people opening up their hearts and facing their fears. The goal of The Weight of Gold documentary, from my perspective, is to show folks, some of the most successful athletes to ever compete in the Olympics, the who's who of Olympians, and hear about their personal struggles with depression.

And the goal for anybody watching this is: depression, anxiety, thoughts of suicide – they don’t discriminate. Like it doesn't matter. Depression knows no boundaries and we're all in this together. And this is a condition that we are still really early on in understanding from a medical perspective, and hopefully that normalizes it a little bit for folks. 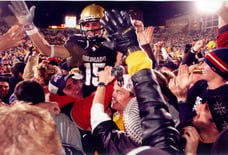 Today: What advice would you give athletes at any age who are battling that stigma?

JB: I would encourage them to normalize the situation. They're not alone. And there are plenty of people inside there, even among their cohort, that struggle with this. And I think that's part of the problem, right? When you're depressed and upset and you feel like you're the only one and everybody else is happy around you, and that's kind of perpetuated by social media, right? We only share the happy moments. And that makes things a lot worse. You know, if you know that there are lots of other people struggling with this, even the folks who seem like they're happy, it really does normalize that.

There's no panacea. I don't think there's a magic pill, you know. I think everybody has journey to build resilience against depression. It is an individual path that has to be walked. Not alone, with other people. And understood. But I do think the first part of this is being able to normalize the conversation. 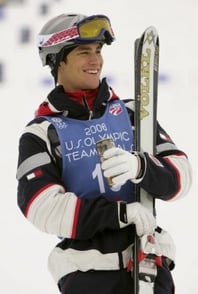 Today: I know that, in terms of the Olympics, there's been a push earlier this year to unionize and have that central voice saying we need these mental health resources. Is it a matter of continuing that message to make sure that there is a push for those resources for Olympic athletes on that level?

JB:  Oh, absolutely. I've spoken with Sarah Hirshland, the new CEO at the USOC (United States Olympic Committee), numerous times to her about the subject. And you know, she is attacking it. USOC is going to attack this. They're taking it very seriously and there's some really great ideas that Sarah and folks have.

And I serve on the board of directors at the US Skiing and Snowboarding Association. We're addressing this. I served on a congressional panel that brought forth ideas on how we can modernize the Ted Stevens Olympic and Amateur Sports Act to include mental health. And we explicitly called it out. And so we're getting close to getting a significant amount of funding from Congress for the Safe Sport Act. And so, I think everybody's really in agreement that this is an important thing to focus on. This is not “like to have,” this is a must have and that's encouraging.