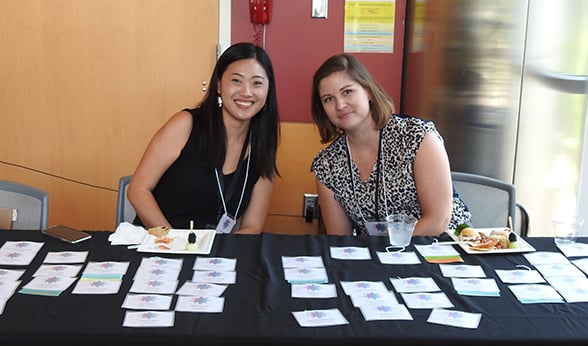 Lina Cheuy, chair of PDRD and chief communications officer for the Postdoc Association, and Jennifer Major, member of this year’s PDRD planning committee and next year’s PDRD chair, welcome guests with a smile.

Before the 1980s, doctors overlooked heart attacks in women, sending them home, often to die, instead of rendering life-saving treatment. More recently, young African-American athletes were misdiagnosed during routine physical exams as being at-risk for a deadly heart defect, with some players placed on dangerous medications or referred for invasive pacemaker implants they didn’t need.

Those are just two examples of how bias in medical research can have dire consequences, a message echoed throughout the ninth annual Postdoc Research Day (PDRD) on the University of Colorado Anschutz Medical Campus. Held this summer, the event’s theme was “Mosaic: Representing All Elements” and included postdoctoral researchers from the CU Denver, CU Anschutz and CU Boulder campuses and National Jewish Health. 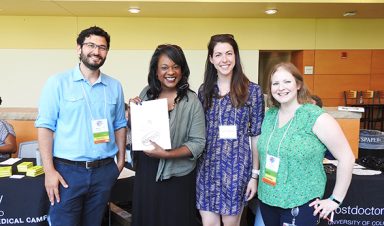 “The bottom line of our mission is to improve the health and well-being of Colorado and the world,” Vice Chancellor for Diversity and Inclusion Brenda J. Allen, PhD, told the audience gathered in Hensel Phelps West for the keynote address. Meeting that mission demands inclusion of people traditionally excluded in scientific endeavors, Allen said.

Postdoctoral researchers also snacked, networked and delivered more than 80 oral and poster presentations depicting their work. The day-long event, organized entirely by postdocs and one of the largest in the country, attracted more than 300 people, including State Rep. Leslie Herod, who attended for the second year in a row through the Project Bridge Liaison Program.

Who is at the table? 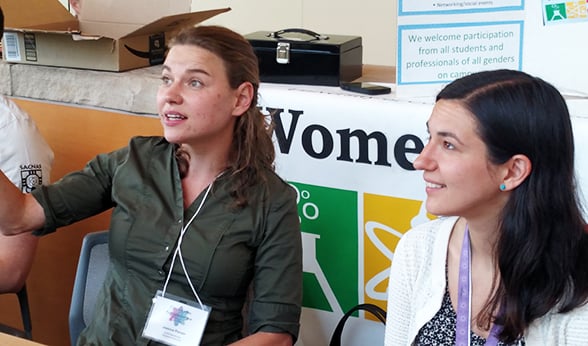 Jessica Ponder and Allison Porman of Women in STEM (science, technology, engineering and mathematics) represented just one of many student groups that took part in PDRD.

“You are here to do impactful research,” said Mónica Feliú-Mójer, PhD, keynote speaker and scientist-turned-communicator focused on making her field more accessible. “You want to solve difficult medical problems.” To do that, she said, requires diverse and multidisciplinary teams. “You have to ask the question: Who is at the table?”

Non-diverse research lacks perspective, she said, using the effect heart-disease guidelines written by white men and based on white-male studies had on women as an example. Because of research, death from heart attack in men began a steep decline in the ‘80s. For women, a similar drop in death rates didn’t occur until after 2000, when research finding gender-specific differences began catching up with medicine.

“When research is not representative of the society we seek to serve, it limits who is benefiting,” said Feliú-Mójer, pointing to the life-altering misdiagnoses of young African-American athletes. The players, whose gene frequencies differ from their white counterparts, were erroneously told after a biased genetic test that they suffered from a heart defect that could kill them instantly on the court or field.

Both sides of the microscope

Noting that fewer than 13 percent of racial minorities make up the workforce in science and engineering, Feliú-Mójer said that diversity must increase on both sides of the microscope and include multiple identities and disciplines in order for meaningful research to occur.

Both Allen and Feliú-Mójer emphasized that inclusion and diversity, which is more about numbers, are not the same thing. “Inclusion,” Allen said, “refers to ways that, no matter who you are, you feel valued and respected and have a sense of belonging.” Ensuring inclusivity in the research enterprise falls on everyone involved, Feliú-Mójer said. “We all have that responsibility,” she said. “It will be challenging, but it will be worth it.”

PDRD was conceived by postdocs nine years ago to showcase their work on campus and its imprint on the community. Other highlights of the day included:

“I was tearing up a few times during his talk,” said Allison Porman, a postdoctoral fellow in the School of Medicine. “He’s had to deal with a lot from birth (when he nearly died and was abandoned by his biological parents in the hospital)  to now. But to see him present what he’s gone through and accomplished is really inspirational to me.”