With the words “morbidly obese” ringing in her ears and the thrill of crossing a 5K finish line fresh in her mind, Emily Cooley’s eyes stopped short on a Facebook post. The Anschutz Health and Wellness Center (AHWC) needed recruits for a weight-loss study. Having just been counseled by her doctor about the gravity of her weight, Cooley took it as a sign.

That was 2-1/2 years ago. Today, the retail manager remains one of the most successful participants to take part in the 170-person study, shedding 80-plus pounds from her 5-foot-7, 240-pound frame and keeping it off, a feat that puts her in a rare group. Only one in five significant weight losers maintain the loss for more than one year, studies show.

“We can generally get individuals to lose weight, or to start exercising, but most are not successful at maintaining either of those two things long-term,” said Danielle Ostendorf, PhD, a physical activity epidemiologist on the University of Colorado Anschutz Medical Campus and recent Colorado School of Public Health graduate who worked on Cooley’s study. “Emily’s a perfect example of doing both things through lifestyle change.”

Cooley, 39, who struggled with weight for years, had resigned herself to being a plus-size woman after her second daughter was born. But then her doctor showed her a Body Mass Index chart classifying her as morbidly obese and at risk of serious health problems.

“I want to be here for them, and not just on the sidelines.” – Emily Cooley

“Seeing morbidly obese in black and white freaked me out,” Cooley said. That, coupled with the life-long duty of parenthood, fueled her attitude reversal. “Being a mom definitely changed my perspective about it,” said the wife and mother of 4- and 6-year-old girls. “I want to be here for them, and not just on the sidelines.”

Feeling the satisfaction of finishing a 5K, which she mostly walked with the support of a runner friend, was another trigger. “I was so touched,” said Cooley, who now runs 5Ks with ease and has a BMI of 25 instead of 38. “I had finished it. I had made my goal.”

The AHWC study, funded by the National Institutes of Health and led by the School of Medicine’s Victoria Catenacci, MD, helped keep her motivated through guidance, support and resources, from 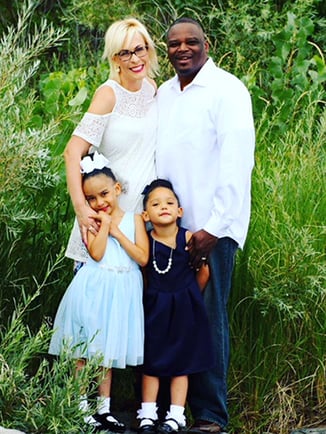 Being around as long as possible for her family served as Emily Cooley's "why" for losing weight.

the latest diet research to top-of-the-line fitness facilities, Cooley said. While working with a nutritionist, she learned she was absent-mindedly drinking calories, swallowing as many as 600 in a large frappe for breakfast and 300 in a large Coke for lunch.

Once her diet counseling changed things, Cooley was eating fewer calories all day than she generally consumed before noon.

Initially, Cooley was disappointed when she was placed in the “delayed-exercise” group during the study, spending the first six months on dieting only while her counterparts had exercise and diet training from the start. But now she sees the chance placement as luck. “I was focusing on only one big change at a time.”

Once exercise was added to her routine, Cooley had already dropped 50 pounds, making working out easier and less painful, she said. Participants’ exercise routines were ramped up slowly, from 20 minutes three times a week to 60 minutes five times a week, which Cooley and Ostendorf also suspect helped prevent burnout and injury, two threats that often sabotage overzealous new exercisers.

Motivation, commitment and “SMART goals” set regularly along the way led to Cooley’s success, Ostendorf said, referring to Specific goals that are Measurable, Attainable, Realistic and Timely. “It could be: I want to lose 10 pounds in two months, or I want to lower my blood pressure 5 mm/Hg in six months,” she said.

Cooley largely uses a regular race plan for keeping on track, setting 5K and 10K dates with friends she’s met along the way throughout the year. “Then I tell my girls I have to go to the gym, so I can be strong for my race,” she said.

Setting an example for her daughters remains a big motivator for Cooley, who often hears: “Good job, Mommy!” and who walked a 5K with her 6-year-old this summer. Higher energy and better moods are other benefits, Cooley said, who has now set a lofty goal of completing a marathon this spring. “I just want to prove that I can.

With 70 percent of Americans overweight or obese, and their burgeoning waistlines costing the medical system as much as $190 billion annually, the Anschutz Health and Wellness Center’s research and promotion of weight loss helps curb an epidemic. Here are a few of study participant Emily Cooley’s tricks for success:

“I will have one cheat meal once in a while, but then I get right back on track. I don’t do cheat weekends or cheat vacations anymore.”

“I still use MyFitnessPal. If I don’t, I underestimate what I eat.”

Have a powerful “why.”

“I can’t be morbidly obese. I have two little girls.”

“I always have a race planned with friends; that helps keep me motivated.”

“We make it a girls’ day out and do something like brunch after the race.”

Surround yourself with support.

“It just makes sense to have friends with the same goals.”

For exercise: “I lay out my workout clothes the night before. And I have two alarms: a wake-up alarm nearby, and a get-out-of-bed alarm farther away.”

For diet: “I always have things like Clif bars or trail mix with me, so I don’t get caught out with nothing.”

“I used to feel guilty about taking time away from the girls. Now I realize if I’m not a healthy mom, I can’t be the best mom.”