After watching the cafeteria lady’s husband die under his team’s care, Thomas Jensen, MD, began focusing on preventing the scenario from happening again. The patient, who had been unknowingly suffering from liver disease, had lost all function of the organ, leaving Jensen and his colleagues nearly helpless. 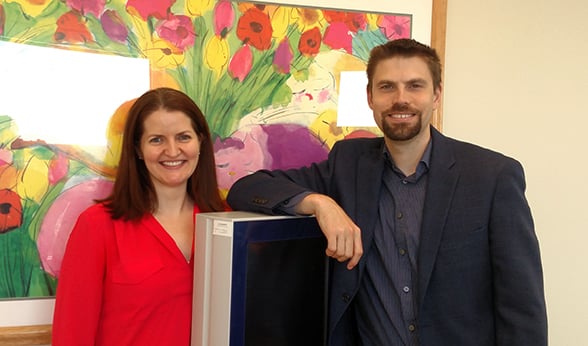 Amanda Wieland, MD, and Thomas Jensen, MD, flank a FibroScan® machine, which they often use to quickly and non-invasively assess patients' liver health. The pair teamed up to launch the Multidisciplinary Nonalcoholic Fatty Liver Disease Clinic (NAFLD) in hopes of slowing an increasing epidemic.

Today, as an assistant professor on the University of Colorado Anschutz Medical Campus, Jensen’s memory fuels his outreach aimed at detecting what has become the most prevalent chronic liver disease in the United States. Rising in tandem with the obesity epidemic, Nonalcoholic Fatty Liver Disease (NAFLD) now strikes children as well as adults and is soon expected to become the top reason for liver transplants in this country.

“It was one of the toughest cases I saw in residency,” said Jensen, who joined the School of Medicine’s Division of Endocrinology, Metabolism and Diabetes in 2016. “He was intubated and on multiple medications and was very difficult to manage. I just remember thinking to myself: We need to have a better way of finding these people before it’s too late.”

Today, Jensen and Amanda Wieland, MD, of the Division of Gastroenterology and Hepatology, have launched the Multidisciplinary NAFLD Clinic, using a team approach that combines their expertise with that of top experts across the campus in decreasing the disease’s burden on patients and the health care system.

“Roughly 30 percent of the population has Fatty Liver Disease, doubling in incidence since the 1990s,” Jensen said. “We know that it’s not only preventable, but it also can be reversible largely through diet and exercise,” said Jensen, who hopes to extend the clinic hours with the addition of SOM’s Emily Schonfeld, MD, a gastroenterologist, to the staff this fall.

NAFLD – which results when fatty deposits (steatosis) collect in the liver because of something other than alcohol consumption – has strong links to obesity and heart and metabolic disease. While it strikes 8 percent of the lean population, NAFLD affects nearly 70 percent of diabetics and 80 percent of the morbidly obese.

If the cause goes unaddressed, liver inflammation, scarring and cell death (nonalcoholic steatohepatitis, or NASH) can result, ultimately leading to permanent tissue damage, or cirrhosis.

With top-of-the-line screening equipment, the clinic’s team can identify cases and determine the severity, generally non-invasively, steering patients down the road to reversal. Jensen hopes more patients and primary care doctors, who often don’t have the knowledge, ability or time to effectively treat NAFLD patients, will seek expert care for themselves or their patients.

While primary care physicians routinely check liver function with blood tests, the Dallas Heart Study found the lab work was not a reliable marker, leaving patients undiagnosed, Jensen said. “On ultrasound, researchers found that up to 80 percent of those patients who did have fatty liver had normal-looking enzymes,” Jensen said.

Because doctors once thought simple steatosis would never progress to inflammation and scarring, non-specialists sometimes downplay early NAFLD, Jensen said. But studies now suggest within a six-year period, up to 40 percent of those patients do develop NASH.

“So, our sense is that it’s not only important to screen but to look at the risk factors that might suggest patients are susceptible and to monitor those patients.”

Having lost his brother 10 years his junior last year to long-undiagnosed NAFLD, Aurora resident Dennis Ipsen considers himself lucky that his doctor sent him to Jensen and Wieland. The pair quickly detected the disease and began monitoring Ipsen.

“That’s what I liked the most,” Ipsen said of Jensen’s expertise and team approach. “He was Johnny-on-the-spot looking for this, and he knew what he was dealing with, and he brought in the other doctor very quickly,” said Ipsen, who has diabetes and heart disease. “The sooner it’s detected, the better off you are.”

“I just remember thinking to myself: We need to have a better way of finding these people before it’s too late.” – Thomas Jensen, MD

At the NAFLD clinic, patients receive counseling on controlling related conditions and on ways of achieving weight loss, from fitness apps to bariatric surgery. “I had an obese patient with moderate steatosis,” Jensen said. She was a candidate for bariatric surgery and opted for that route. One month and 15 pounds later, a recheck found her fatty liver was completely resolved, Jensen said.

In addition to the Metabolic and Bariatric Program for severely overweight cases, the NAFLD clinic works closely with the CU Anschutz Health and Wellness Center in helping patients master lifestyle changes and achieve weight loss. 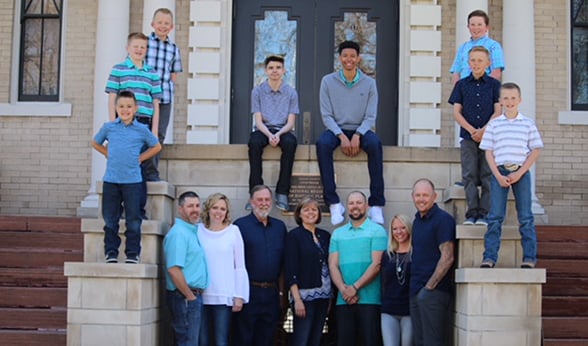 Valerie Frank stands front and center of her family, which includes eight grandsons. Frank travels from her Sterling home to the CU Anschutz Medical Campus for specialist care for liver disease.

Although Valerie Frank’s disease had progressed to cirrhosis by the time she found the clinic, the Sterling resident dropped more than 40 pounds since diagnosis and holds out hope that Jensen’s and Wieland’s care can keep complications at bay.

“It’s still good to know,” said Frank, who has diabetes and spent more than a year seeing doctors and undergoing tests trying to find an answer for fatigue and abnormal blood work. She finally told her doctor she gave up. “And he said: Let’s try one last thing. Let’s have you see Dr. Jensen and Dr. Wieland at UCHealth.”

Three weeks later, after making the two-plus-hour trip from her Sterling home, Frank was diagnosed. Now, despite the drive and higher out-of-pocket costs, Frank said she will continue under the doctors’ care for as long as they can help her and would encourage other liver patients to do the same.

“Absolutely. From the minute I walked in, I felt a connection with them both,” said the mother of three and grandmother of eight grandsons. With cirrhosis, her prognosis is not certain, but she’s sure of one thing: The doctors are doing everything they can to give her the best outcome. “I’m feeling well. I’m doing well. You can’t give up on hope,” she said. “I have total faith in them.”