Sarah Boylan thought a long lifespan was “not in the cards” due to cystic fibrosis. Instead, thanks to advancements in targeted therapies, 31-year-old Boylan, who has received much of her care at CU Anschutz, is planning to fill her passport and taking a long view of her future.

Boylan was just 10 days old when she was diagnosed with cystic fibrosis (CF), a genetic disorder that affects the lungs and has a grim prognosis, particularly back then. Her parents were told their daughter’s life expectancy would be 16 … “or so.”

“Never in my life growing up did I think I was ever going to have to live as an adult,” she said. “It didn’t seem like any of it was going to be in the cards.”

Sarah Boylan traveled to Australia in 2019. She can't wait to go back.

Thanks to developments in targeted therapies for patients with CF – as well as over a decade of care from surgeon and CU Sinus Center Director Todd Kingdom, MD, and Robie Gray, PA-C, at the University of Colorado School of Medicine – Boylan is now 31 and living mostly free of the sinus congestion and pain that has plagued her life.

‘A future I never thought I’d have’

Boylan recently wrote a blog titled “Planning for a future I never thought I’d have” for the CF Foundation website. She says “CF grew up with me” and describes how in 2008, as a freshman at CU Boulder, she was the first CF patient in Colorado to be part of a clinical trial for Kalydeco (the trial took place at National Jewish Health and involved providers who are faculty members at the CU School of Medicine). The drug “corrected my CFTR (cystic fibrosis transmembrane conductance regulator) protein on a cellular level,” she wrote. “This wasn’t a cure, but in terms of treatment, it was a home run with the bases loaded.” 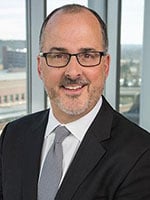 A second targeted therapy home run arrived this year, just after Boylan had to, courtesy of the pandemic, postpone plans to be an au pair in Australia for a year. In April, she started taking Trikafta, which received Food and Drug Administration approval in fall 2019. There were a few side effects, but overall the drug has done wonders for her sinuses. She has dramatically reduced her visits to Kingdom and Gray for regular maintenance.

While Kayldeco is targeted to the roughly 4% of patients with CF who have a specific genetic mutation (Boylan falls into that group), Trikafta is designed for patients with the most common CF mutations. “That’s like over 90% of the CF population,” Boylan said. “It’s doing miracles for them.”

Kingdom calls the new therapies “game changers.” On a cellular level, patients with CF suffer from a malfunctioning protein made by the CFTR gene. The protein inhibits the lungs’ and sinuses’ ability to move and clear mucus, leaving patients vulnerable to infection.

The drugs, in basic terms, help the protein to be properly made, transported or placed in the cell. “They are literally reversing the problem,” Kingdom said. “It’s designer medicine, precision medicine – whatever term you want to use – at its best.”

The drugs have greatly improved Boylan’s quality of life by significantly lessening her nasal and sinus distress. “We’re finding we don’t have to do as much – whether it’s surgery or just visits,” he said. “Sarah is among the many who, early in this (targeted therapy) experience, have seen their lives changed. The intensity of care required for their sinuses has decreased dramatically.” 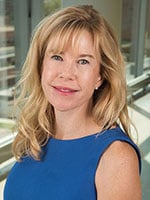 International travel and other big goals, such as careers and even marriage and families, are now on the horizon for patients with CF, especially those who are in earlier stages of the disease.

As soon as COVID-19 vaccinations are the norm, Boylan, who is among the longer-term people with CF, plans to resume filling her passport with stamps. “Someone like Sarah has always pushed for what she wants to do,” Gray said. “She’s always wanted to live her best life.”

Boylan recalls having an epiphany after one of her sinus surgeries – she’s had more than 15 – on the CU Anschutz Medical Campus. She was a teenager lying in her hospital bed when this popped to mind: “If you can’t change your circumstances, change the way you think about them.”

It was a shift that focused on the big picture while remaining mindful of life’s many little gifts. Boylan’s mental shift helped her cope with the notion that if she did reach adulthood, she’d be “super debilitated.”

Now, with the advent of “miracle” therapies that enable a longer and much-healthier life, she is ditching her tendency to just go through the motions. Instead, she’s taking the long view.

“I’m feeling like, ‘No, you can’t just live to exist, to know you’re about to die,’” she said. “I have to be like, ‘Alright, what’s next?’ I have to … know that there is something coming up next that’s maybe more important than what’s going on today. That was such an uncomfortable place for me – everything from pursuing a career to dating to finances. I have not prepared my life for a future of any of that.” 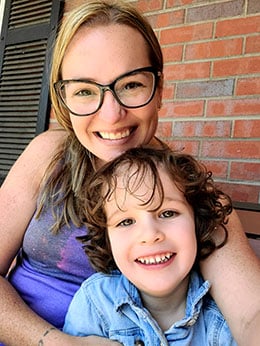 Sarah Boylan with her nephew Julian

Boylan finished her bachelor’s degree a few years ago, earning a degree in technical writing at CU Denver. She has tried to keep CF in the background, always playing sports, going to dances, attending school and working to pay her tuition bills. She has mostly worked as a nanny, joking that “I’ve raised half of Denver.”

Boylan has spent the pandemic nannying for a family in Denver. During the holidays, she looks forward to her brother moving back to Colorado and getting to meet her niece, who was born six months ago in China.

Children can be carriers of SARS-CoV-2, so Boylan has been extra-careful as a nanny. She’s been tested three times for COVID, as well as for antibodies in her blood, and all tests have been negative.

Gray said COVID-19 hasn’t had a significant impact on patients with CF, possibly due in part to their already vigilant hygiene and avoidance of pathogens. “For the few patients with CF I’ve seen who had COVID, it was not such a big deal for them,” Gray said. “We sort of chuckle about the fact that they have such bigger and more exciting pathogens in their lungs that those pathogens outweigh anything COVID can do to them.”

Seeking a cure for every patient with CF

There are many different genetic mutations within the CF population, and the Cystic Fibrosis Foundation has set a goal of finding a cure for every patient with CF.

Kingdom recalls treating patients with CF in the mid-‘90s when the conversation was often “thinking about the next month.” “Even though Trikafta just came out last year, this is decades in the making,” he said. “Pre- Kalydeco, pre-Trikafta, I remember when it was celebrated that the mean age of survival (for patients) hit the 30-years-of-age mark.

“Think about that – that was a huge milestone,” he said. “I just wonder how it’s going to go now.”

Skydiving on the horizon?

For Boylan, it means more years to experience the wonders of adulthood, as well as continue her penchant for fun. Her motto is “do everything twice,” so her second trip to Australia – “my heaven on earth” – is high on the priority list.

Colorado is an epicenter for cystic fibrosis research and care

in Denver for its inpatient and procedural needs currently. Previously, it was

UCHealth University of Colorado Hospital for many years.

with the CU School of Medicine. “We share expertise through academic conferences

and clinical care, research and advocacy. We’re very fortunate to have such a partnership

and association with a place that has committed decades of their energy, dollars,

expertise, etc., to take care of this disease.”

Any adventures she wants to experience for the first time?

“Maybe skydive,” she said. “My dad was supposed to take us for my 18th birthday but my (two) siblings wanted us all to do it together. My sister at the time lived in Chile and since then none of us has lived on the same continent for over 10 years.”