Please excuse Kelsey McNeill if she wipes away tears during a short home video of her husband, Brian, playing the drums while their 4-year-old daughter shimmies to the groove under a blanket.

Why the strong emotion? Because Brian is still keeping the beat — both on his drums and in his young chest — and that, says his family, is a joy and wonder to behold.

“I kind of feel like I died twice in the last couple months,” Brian said during a recent interview just down the hall from the office of his surgeon, Muhammad Aftab (pronounced Ahf-tahb), MD, assistant professor of cardiothoracic surgery at the University of Colorado School of Medicine.

The father: ‘I died twice’

Asked about the traumatic-yet-miraculous events of the past six months, Brian pauses and squeezes Kelsey’s hand. “I don’t even know what to tell you,” he said, eyes welling. “I sometimes can’t believe that I’m here.”

Consider the range of severe ailments that might strike an elderly heart and you get an idea of what Brian, just 38, survived in 2018. On one day, the father of two daughters learned he had a blood clot on his aortic valve. On another, doctors discovered he had suffered, likely during summer, several mini-strokes. On still another, Aftab performed a 14-hour surgery on Brian at UCHealth’s University of Colorado Hospital (UCH), one of the most challenging cardiac surgeries of his career.

In hospitals from Salida to Colorado Springs to Aurora, Kelsey chronicled every step of Brian’s improbable journey. From July 21 to Nov. 25, she jotted 14 entries in her journal, beginning with “Airlifted to Penrose (St. Francis Hospital) due to popliteal artery clot.”

Nov. 10 proved the most harrowing entry. While watching a football game at home in Salida, Brian suddenly slumped on the couch. Kelsey and Brian’s parents kept him alive by performing CPR, getting an all-important assist over the phone from Aftab, who, although not on-call that weekend, happened to be home. Brian’s father put in the urgent call to the UCHealth DocLine, which then contacted the surgeon.

But that’s jumping ahead to the end zone, if you will, of the story. Brian sustained the first body blows on July 21 when he noticed severe pain in his right leg. He went to the ER at a Salida hospital where doctors said he needed to be airlifted to Penrose in Colorado Springs. He underwent emergency surgery, and the popliteal artery clot was removed. 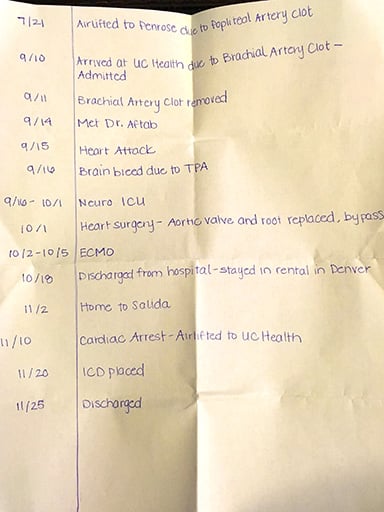 As Brian recovered from the clot removal, a Springs physician recommended specialized care to get to the root of the clot problem. “He basically said, ‘You need to go to Mayo — they’re the only people who are going to help you figure out what’s going on here. You need to go to that level of research hospital,’” Brian recalled.

The discovery: ‘chunk of vegetation’

Brian and Kelsey considered visiting Mayo, then decided to go to UCHealth’s UCH instead. On Sept. 11 in Aurora, he had a thrombectomy that removed another clot, now from the brachial artery in his arm. Doctors also found that Brian had suffered several mini-strokes, which accounted for some short-term memory problems.

Another test revealed a large clump on his aortic valve. Aftab, who first met Brian on Sept. 14, described it as “a big chunk of vegetation” on the valve — infective endocarditis. “It was like seaweed sitting on the valve,” he said. “We believed pieces of that infection had broken off and traveled through his body causing the clots.”

They feared part of it could break off and trigger a serious cardiac event. The next day, on Sept. 15, it happened.

“I had the classic elephant sit on my chest. It compressed so hard it was impossible to breathe,” Brian recalled. “Dr. Aftab said this could happen, and I was sure it just did, so he predicted the future.”

Consulting with a multidisciplinary team at UCH, it was decided to administer a “vegetation buster,” or a tissue plasminogen activator (TPA). It relieved the coronary embolization, but apparently resulted in a risk of using a TPA — bleeding on the brain.

Brian was transferred to neurosurgery ICU for close monitoring and more CT scans. His heart condition remained a concern, but surgery wasn’t an option with intracranial bleeding and several mini-strokes. The bleeding resolved in late September, then further tests showed the alarming extent of the endocarditis.

“It was not only an infection of the prosthetic aortic valve, but also in the aortic root of his heart, with a large abscess in that area,” Aftab said. “It was deeper in the heart involving coronary arteries, heart valves and the aorta. So essentially, the infection had destroyed all these structures. At that point I realized this would be a very long surgery.”

The surgery started at 9 a.m. and ended close to midnight. It involved a graft, a coronary bypass and an aortic root replacement, and one key juncture saw Aftab hand-massage Brian’s heart to keep blood pumping while an extracorporeal membrane oxygenation (ECMO) heart-lung machine was hooked up. Brian remained on the ECMO for four days.

Kelsey McNeill's mother crafted this painting of Aftab's left hand gripping Brian's heart. The surgeon massaged Brian's heart back to a rhythmic beat at one point during a 14-hour surgery on Oct. 1.

“On the 7th or 8th of October, he started to wake up and make sense of what had happened,” Kelsey said.

Brian was discharged from UCH on Oct. 18 and returned home to Salida. A couple weeks later came that fateful afternoon of watching football.

“I don’t remember the football game at all,” Brian said. When he slumped on the couch, his eyes were open but he was already unconscious. Kelsey said, “His breathing was raspy, and he was gasping. We knew something was seriously wrong.”

Brian’s dad began chest compressions and his mom blew into his airway. Kelsey, during a break from helping with the compressions, called 911. 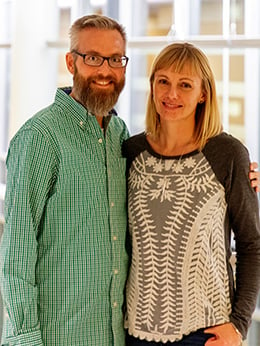 Kelsey McNeill, along with Brian's mother and father, performed CPR on Brian for several minutes when he went into cardiac arrest on Nov. 10. EMTs in Salida worked to stabilize him for 75 minutes before he was airlifted to UCH.

Tears streamed down Kelsey’s face as she recounted: “They worked on Brian for close to an hour at our house. They used an automated CPR machine and, over 15 times, they worked to shock (using an automated external defibrillator, or AED) to bring his heart back to rhythm.”

All signs indicated that Brian suffered ventricular fibrillation that put him in cardiac arrest.

The clock: running out of time

From the moment Brian slumped on the couch until his transport to the Salida hospital where the automated CPR and AED continued (a total of 18 shocks), the clock ticked toward an hour.

“He was down for a total of 45 minutes before his heart started again,” said Aftab, who remained on the phone with the McNeills and the Salida care providers for most of that period.

The ED team in Salida worked to stabilize Brian for roughly 75 minutes before he was airlifted to UCH where Aftab had a team waiting. Brian, who remained unconscious and unstable, received a CT scan of his head, chest and abdomen and an echocardiogram.

“His vitals were improving, but he was posturing at that time, a typical sign of possible brain injury,” Aftab said. “His arms were out and straight. We were really concerned about neurologic damage given his prolonged CPR.”

The scans showed Brian hadn’t suffered a stroke, and Aftab remained cautiously optimistic. Brian had been put under sedation — a cooling of his body to a near-coma state, in order to minimize potential brain damage — from the time he was in the Salida ED until early the next day at UCH.

Within 24 hours of turning off the sedation, Brian opened his eyes and, to the surprise of everyone, immediately recognized his parents. His kidneys sustained some injury, but they showed recovery within 72 hours.

“From day four, he was up and walking around,” Aftab said. “It’s very unusual to have this kind of recovery. It was just remarkable.”

Aftab gives credit to the EMT team in Salida, as well as the critical care providers in the ED and those aboard the helicopter during transport to Aurora. But perhaps most essential was the quick CPR initiated by his family.

“If, during cardiac arrest, one person beside you is not vigilant, it could have been a fatal event,” Aftab said. 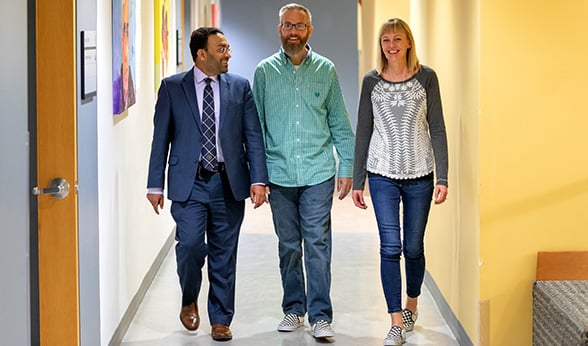 From left, Muhammad Aftab, MD, Brian McNeill and Kelsey McNeill walk down the hall outside Dr. Aftab's office in the Academic Office Building.

Before leaving the hospital on Nov. 25, Brian received an internal defibrillator that is much like a pacemaker. If it detects any interruption in heart function, it delivers an electrical shock to the organ.

Aftab believes Brian’s Nov. 10 cardiac arrest stemmed from scarring on the heart that resulted from interrupted blood flow during his heart attack on Sept. 15. Meanwhile, the source of the infective endocarditis remains a mystery, but it is known that the infection came from a common skin bacteria. Brian had undergone a dental procedure in June that could have been the source, but the bacteria also may have stemmed from a Christmas tree-harvesting excursion, when he accidentally sliced off the tip of his finger.

He is now on a cardiac rehabilitation regimen that he can complete at home in Salida, where, as is the way of small communities, the McNeills have received an outpouring of support.

The collaboration: ‘Disciplines came together’

Brian and his family remain amazed by the care and expertise they received at UCH. The multidisciplinary team approach, of Mayo renown, all happened right here in Colorado.

“Six to eight different teams came together on Brian’s case. We needed all of them to figure out why he was having the problem and then figure out how to fix it.” – Kelsey McNeill

“The cardio, neuro, vascular surgery. … We got here and immediately they came together with their specialties,” Brian said. “It’s amazing because, with so many disciplines coming together, there could have been a lot of egos in the room. But that all went away. What matters to them is taking somebody who is sick and making them better.”

The multidisciplinary care approach is every bit the hallmark at the CU Anschutz Medical Campus as it is at elite medical centers across the country, Aftab said.

“The family becomes part of the team, and not one team can do it all,” he said. “It has to be multidisciplinary. It has to be focused on the patient with the one goal of making him or her better.”

Kelsey said all the care providers at every stage of Brian’s ordeal, from the surgical team to the nurses in the various ICUs, were incredible.

“We had six to eight different teams coming together to work on Brian’s case,” she said. “We needed all those teams to come together and figure out why Brian was having the problem and then figure out how to fix it.”

Kelsey’s mother is an artist, and in the days after the marathon surgery, she crafted a colorful painting of Aftab’s left hand massaging Brian’s heart (as it happens, the surgeon is left-handed) back to a rhythmic beat. During the interview about Brian’s case, Aftab, in an aside about how his surname is pronounced, mentioned that the name means “sunlight” in Farsi.

“My mom’s going to love that,” Kelsey said with a bright smile, one that has become the norm now that her husband is back home and in good health. “She thinks you are the sunlight.”