At first, Justin Boley didn’t worry too much about the headaches because they didn’t seem serious. Just take a couple Excedrin, his mother advised him.

He wasn’t too concerned when the right word sometimes eluded him—calling his parents’ hot tub cover an “ice cream cone.” Everyone in the family just got a chuckle out of that odd moment.

He didn’t even worry when he seemed to be taking more sick days than usual.

Why would he? He was a healthy, 23-year-old man with a good job as a certified nursing assistant and his whole life ahead of him.

But then came the morning when Justin woke up and could not talk. He knew he needed to call in sick, so he dialed the number, opened his mouth and no words came out.

“I was thinking straight, breathing fine, but I couldn’t speak,” he said. “Mostly I remember thinking, ‘This is really strange.’”

That strange speechless morning would lead to a devastating diagnosis.

But today, with the care of a compassionate CU Cancer Center physician and with the use of a novel medical device, Justin Boley still believes he has his whole life ahead of him—even though that life may be measured in months rather than years. 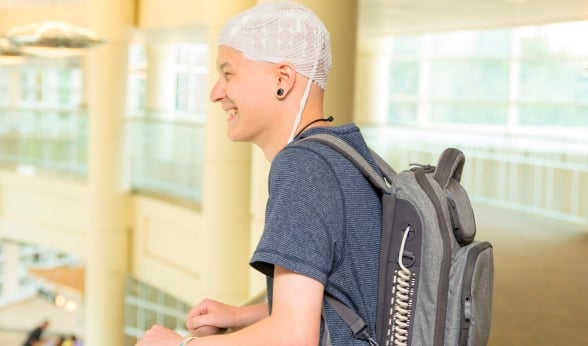 “He fought to get into this world,” Brandy Boley said, looking affectionately at her son across the room. “Justin doesn’t do anything half-way.”

Born at 29 weeks, Justin was a 2-pound preemie who spent 3 months in intensive care before his parents brought him home. So it’s understandable that Brandy thought the worst health crisis she would ever face with her son happened more than two decades ago.

But when Justin’s odd symptoms persisted and became more worrisome—he started to have double vision, lost weight and slept more every day—Brandy decided it was time to seek medical care.

In January 2015, the Emergency Room physician at Memorial Hospital in Colorado Springs asked Justin to touch his nose with his finger. Justin couldn’t do it. The doctor ordered a scan of Justin’s brain. Although Justin remembers very little of what was going on during that time, his mother will never forget.

“As a military family, you identify life events by where you lived when something happened,” Brandy said. “This is how we will remember Colorado. A doctor saying to us, ‘We found a mass.’”

The tumor was the size of a tennis ball and it was located in Justin’s thalamus near the brain stem. He had the tumor biopsied on this 23rd birthday. Brandy remembers a physician coming into the room after the procedure and “gently” delivering the news.

“’Glioblastoma’—I had never heard of it,” she said. “I heard the doctor say ‘grade 4 … could live 12 months.’ We were too shocked to cry. But it hit me that by his next birthday, Justin could be gone.”

Glioblastoma (GBM) has a well-deserved reputation for being one of the deadliest cancers. It is the most common and aggressive form of primary malignant brain tumors in the United States, affecting approximately 10,000 Americans each year. Historically, the median overall survival time from initial diagnosis and with optimal treatment is 15 months.

The standard treatment for GBM is surgery, followed by radiation therapy and chemotherapy. In Justin’s case the tumor was inoperable, a fact that Justin accepted with equanimity. “It’s just too much risk versus the reward,” he said. “They could take it out, but I might be completely paralyzed, which I do not think would be a better life.”

Justin Boley laughs easily and often and has a way of finding the good news in bad. The biopsy was good, he says, because it drained the fluid that had built up in his brain and relieved the pressure causing his double vision and speech problems. He has no complaints about the oral chemotherapy he takes. The radiation—not a big deal.

“Things could be worse,” Justin said, with absolutely no hint of irony. “What I’m going through is bad, but there are plenty of other people who are suffering. Sure, I’m unlucky—but I’m not the most unlucky person.”

That, Brandy Boley said, is an example of how Justin has “perspective.” She has also tried to maintain perspective driven by a single motivating question: “How can we make the most of the time we have?”

The answer came from Douglas Ney, MD, a neuro-oncologist at CU Anschutz, and it took the form of a medical device that looks like a gauzy swim cap covering a series of Band-Aids.

When the Boleys brought Justin home after the biopsy, Justin’s father started “nesting,” adapting the house to the potential needs of a son who could become increasingly disabled. For his part, Justin felt better than he had in a long time, and he set out to enjoy his life. 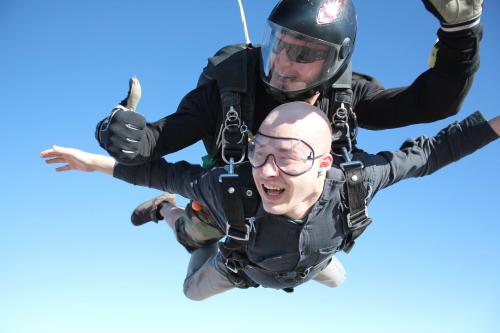 “I like talking with my mom, hanging out with friends, rooting for the Kansas City Chiefs,” he said. He also took the opportunity to go skydiving and surfing.

A cadre of Boley family and friends spent night and day online looking for every treatment available, but it was an oncologist at Memorial Hospital who originally suggested that Justin contact Ney because of his experience with Optune, a medical device which was originally approved by the FDA in 2011 for recurrent GBM.

Ney and his colleagues have treated approximately 50 patients with Optune, making the CU Cancer Center one of the top prescribers in the country. “Our patients are open to alternatives,” he said. “They’re willing to try new things, and they’re coming from all over the country to try this.” 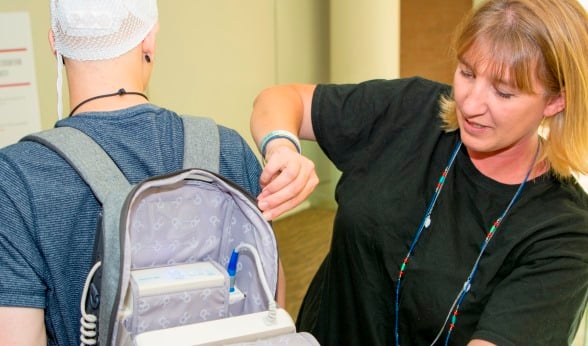 Optune is a cap covering a series of electrodes which Justin wears on his head as long as he wants every day. Powered by a battery pack that he can carry with him, Optune works nonstop, applying alternating low-intensity electric fields to the tissue under the electrodes—200 kilohertz pulsing front to back, side to side, endlessly repeating as long as he’s wearing the device.

“It doesn’t feel like anything,” Justin said. “Your head gets a little warm, but if it’s working, I don’t need to know how.”

Ney can tell you how it works—the electric fields interrupt cancer cell structures during division, disrupting the cell as it tries to replicate. While it is often difficult to get chemotherapy to work on brain tumors, Optune goes directly into the brain, shuts down and kills tumor cells, while it spares normal cells.

“It is a relatively simple concept with an incredibly complex design,” Ney said. “It’s quite remarkable.”

So remarkable that the first clinical trials were ended early because of positive results—Optune was clinically effective, adding three to five months to life expectancy, with better quality of life for patients and without the side effects that can come with chemotherapy. It is the first treatment with a positive trial results for GBM in the past 10 years.

At Justin’s August 2015 MRI scan, after months of chemotherapy, radiation and Optune, his tumor, which once was roughly the size of a tennis ball, had shrunk by about 60 percent to the size of a ping pong ball. 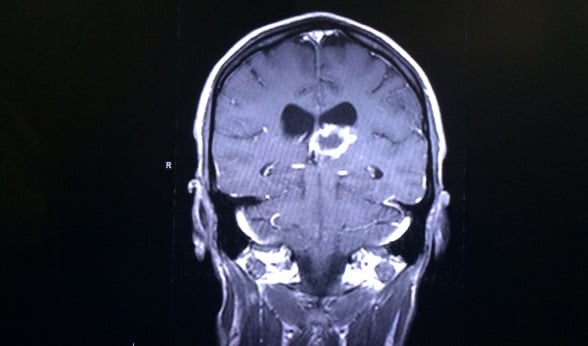 “Justin has had a pretty amazing response,” said Ney. “This is a rare opportunity and responsibility to touch lives in a unique way. We may not be able to change the outcome, but we can give patients more time, a better quality of life and that is astounding. That is what we strive to do.”

The Boley family cannot say enough good about the clinical results they’ve seen with Optune and they also have high praise for the company that manufactures the device because of its support through medical insurance appeals. Justin has grown accustomed to people staring at his head when he goes out in public. He prefers the people who ask directly what Optune is to those people who simply stare.

While he and his mother have found solace in both meditation and humor, both confess they have “fall apart” moments, which can mean anything from nonstop crying to midnight binges on mac and cheese.

“The one that hit me hardest is grandchildren,” Brandy said. “He wanted children, I wanted grandchildren to spoil. Now, that may not be a possibility.”

For now, the Boley family focuses on living in the present, celebrating victories like a great MRI scan. They base their future plans on test results. Brandy confesses she is planning a 24th birthday party for Justin, ever mindful that with Optune they are only buying time.

“That’s what I’m hoping for,” Justin said. “Time. Because the alternative is no time. So I’ll take anything.”