Carlos Catalano, PharmD, PhD, was the first member of his family to attend college, earning biochemistry, medicinal chemistry and pharmacy degrees. His research has been continuously funded by the National Institutes of Health and the National Science Foundation for over 30 years.

Growing up in a family of machinists, Carlos Catalano was fascinated by the inner workings of devices. Wrist watches, especially, weren’t safe around the family home in Southern California.

“I used to take watches apart to see how they worked. I’d never get them back together,” Catalano, PharmD, PhD, professor of pharmaceutical sciences at the Skaggs School of Pharmacy and Pharmaceutical Sciences, said with a chuckle. “I just had a general interest in how things work.”

Later, when he became the first member of his family to attend college, Catalano developed an interest in biochemistry and pharmacy. Ever since, he has researched the inner workings of viruses and nanoparticles. His research has been continuously funded by the National Institutes of Health (NIH) and the National Science Foundation for over 30 years.

“We’ve looked at virus assembly, and we do fundamental studies – biochemistry, biophysics, enzymology and structure,” he said. “We use a bacteriophage, which is a virus that infects a bacteria, and try to figure out how it works.”

Catalano is collaborating with Theodore Randolph, PhD, of the Department of Chemical and Biological Engineering at CU Boulder, to develop novel, controlled-release formulations of bacteriophages for the treatment of osteomyelitis, a deep-bone tissue injury. The project received an AB Nexus award last spring; AB Nexus is a program that encourages CU Anschutz and CU Boulder scientists to collaborate on innovative research.

During his CU career – he also spent eight years at the University of Washington – Catalano has been a leading student mentor, serving as faculty advisor to the CU Anschutz student chapter of the Society for the Advancement of Chicanos and Native Americans (SACNAS) and co-director (with Eduardo Davila, PhD, professor of medicine-medical oncology) of the CU Anschutz PIKE-PREP, a NIH-funded program to recruit and train post-baccalaureate diversity students for successful careers in science.

In the following Q&A, Catalano talks about developing his love for research, his current AB Nexus project and why it’s important to foster diverse approaches to science. The interview has been edited for clarity and concision.

You were the first member of your family who went to college. Tell me a little about your upbringing and how you became interested in science.

I grew up in a middle-class family in Corona, Calif., and college wasn’t necessarily on the table. I remember talking to my dad, who said, ‘Yeah, it’s probably a good idea.’ In junior high, I participated in a science fair, and I always was interested in how things worked. After high school, I got a job in a hospital, and the only person who seemed to like their job was the pharmacist, so I thought, ‘I’ll become a pharmacist.’ I moved to the California State University San Francisco for the second half of my undergraduate degree. One day, I went to talk to someone in the UC San Francisco School of Pharmacy, and they referred me Neal Castagnoli, PhD. It’s weird that he was in his office that day because he was always traveling – he was never on campus. I told him I was interested in chemistry, but also pharmacy. He said, ‘Well, here you can get both degrees’ – and that planted the seed.

So, I got both medicinal chemistry and pharmacy degrees there, and in that process, I found out that I really liked research. Dr. Paul Ortiz de Montellano, my mentor, said, ‘If you’re going to do this for a living, you better do a post-doc,’ so I did a post-doc with Dr. Steve Benkovic at Penn State University and then came here in 1989. I met Dr. John Thompson while a graduate student in Paul’s lab – he was there on sabbatical – and he recruited me to come to CU.

What are you trying to accomplish with your AB Nexus project in collaboration with Ted Randolph at CU Boulder, who you’ve previously worked with in developing therapeutic formulations of nanoparticles?

Among the limiting factors in bacteriophage therapy is the formulating for long-term stability. The U.S. Food and Drug Administration wants all of “drugs” to be very well described – and one part of it is the formulation.

The Achilles heel of bacteriophage therapy is that it’s exquisitely sensitive to a particular bacterial strain. Once it’s infected and killed an entire strain, it’s a self-limiting dose because there’s nothing left to infect. The problem is, there’s another bacteria strain that’s sort of like the (original target), but different enough that it’s not going to be impacted. So, you need to make these cocktails of two or three different bacteriophages that span the infectious agents.

With this project, we’re developing a cocktail of three bacteriophages that span three different bacteria that are involved in deep-bone tissue injury. The idea is to formulate these therapies so they are very stable on the shelf, so we can just grab them when needed. You can also put on a coating that allows for slow release. So, the idea is we can apply this powder to the injury, and it will provide a site for the release of the bacteriophages locally where the infection is or where the infection may recover.

How did you become interested in mentoring young scientists?

I don’t have a good answer for that other than it just feels like the right thing to do. I’ve had many students in my lab – many of them from diverse populations. In 1989, when I got here, I’d just heard of SACNAS, and I went to their national conference in 1990; I’ve been going every year since. I served as the University of Washington SACNAS chapter faculty advisor, and now serve as the faculty advisor for the CU Anschutz chapter.

I also served as the co-director of a PREP program at the University of Washington (where he was a faculty member from 2007 to 2015). Then I came back here and serve as a co-director of the PIKE-PREP program at CU Anschutz along with Dr. Eduardo Davila. It’s a program that helps recruit and prepare students from underrepresented populations for graduate school in science.

How does having a diverse workforce benefit science and research?

It definitely does. I say this to students all the time: You’ll hear the comment, ‘I’ve got the data and data is data. You can’t argue about the data.’ That is a complete fallacy, because you get a piece of data and spend the next six years arguing about it. So that is the basis of science: this discussion, evaluation, possibilities, what to do next. If everybody is brought up the same way and goes to the same university, everybody ends up with the same frame of thought. It’s difficult to do anything but this (makes a box with his hands).

So, when you have the opposite – you have different types of thinking, different ways of approaching things, of interacting, of doing experiments – everyone brings something different to the table. 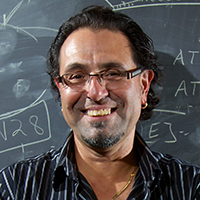