Research conducted by the University of Colorado Skaggs School of Pharmacy and Pharmaceutical Sciences provides evidence to support expansion of insurance plan coverage of noninvasive prenatal testing (NIPT), a simple maternal blood draw which screens for fetal chromosomal disorders including trisomy 13 (Patau syndrome), trisomy 18 (Edwards syndrome), and trisomy 21 (Down syndrome), to women under the age of 35.

The research represents a first-of-its-kind published analysis of results from a risk-sharing agreement between biotechnology company Illumina, Inc. and insurer Harvard Pilgrim Health Care to expand coverage of NIPT to pregnant women less than 35 years of age. CU Pharmacy assistant professor Brett McQueen, Ph.D., is conducting the research in partnership with advisory firm Real Endpoints to evaluate the impacts of the agreement.

As part of the agreement, Harvard Pilgrim Health Care expanded coverage of NIPT to include pregnant women under the age of 35 who are covered by Harvard Pilgrim’s health plan. Real Endpoints brought Illumina and Harvard Pilgrim together, helped negotiate the contract between them, and recruited CU Pharmacy to analyze the data.

A CU Pharmacy analysis of health care data during the course of one year showed — for women under age 35 — a 42 percent increase in NIPT tests ordered and a 15 percent decrease in invasive diagnostic tests (chorionic villus sampling and amniocentesis) for trisomy syndromes when health insurer Harvard Pilgrim Health Care expanded NIPT coverage to all pregnant women.

NIPT is a more accurate alternative to other more widely used trisomy screening tests, including nuchal translucency and serum biochemical assays. NIPT’s detection rate for trisomy syndromes is more than 99 percent, according to the American College of Obstetricians and Gynecologists.

Poor positive predictive values associated with nuchal translucency and serum biochemical assays can have consequences, potentially leading to invasive procedures that increase the risk of miscarriage. Despite data that support the effectiveness of NIPT, some insurers only cover the testing only for women over the age of 35, and those with high-risk pregnancies.

McQueen presented the results Oct. 4 at the Annual Meeting of the American College of Obstetricians and Gynecologists Districts V, VIII and IX in Maui, Hawaii.

The full findings of the study will be published in 2020 and will include a comprehensive analysis of costs and outcomes related to the expansion of testing in the Harvard Pilgrim Health Care plan. 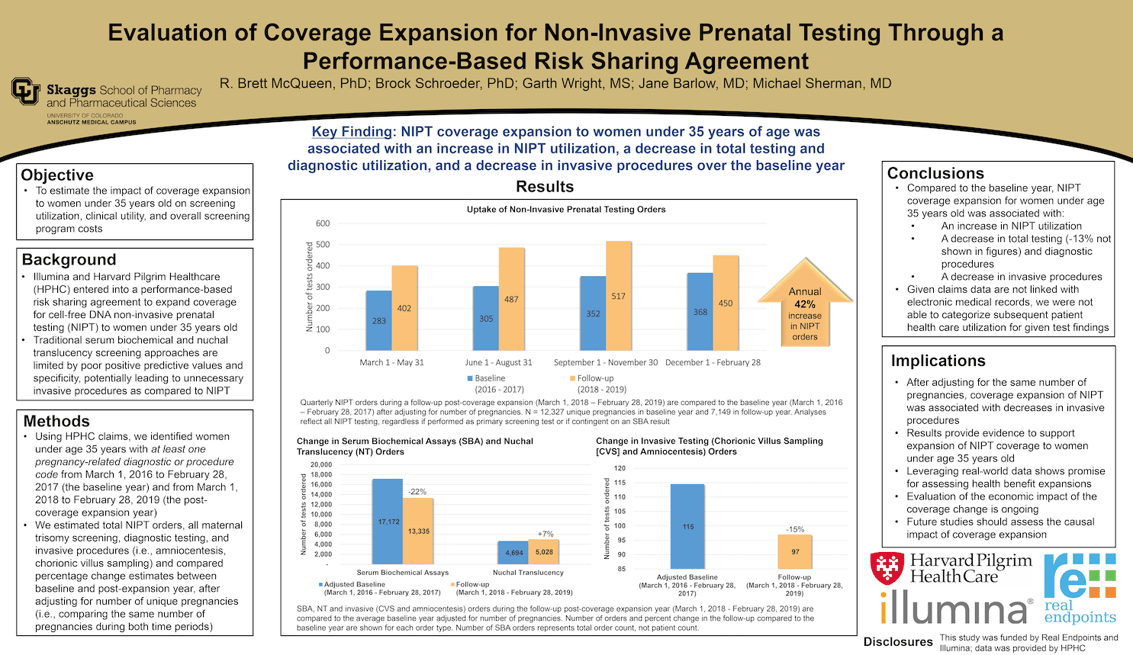