How does SARS-CoV-2 shut down the sense of smell? This question and others are part of a study being led by Diego Restrepo, PhD, at the CU School of Medicine. Researchers are using olfactory epithelium cultures to study how the novel coronavirus might alter the cells and circuits that detect stimuli.

Diego Restrepo, PhD, professor of cell and developmental biology at the University of Colorado School of Medicine, is leading a National Institutes of Health-funded grant into why people infected with SARS-CoV-2 often lose their sense of smell. It’s frequently one of the first symptoms of the infection.

CU Anschutz Today caught up with Restrepo in his office at the CU Anschutz Medical Campus for an in-person interview – rare in these times of Zoom – about his team’s research into this mysterious symptom and the implications it holds for other diseases, including Alzheimer’s. The conversation has been edited for concision and clarity.

Why do many people with COVID-19 end up losing their sense of smell?

First of all, there are some viruses that do cause a loss of smell – the influenza virus, for example. But the reason SARS-CoV-2 does is two reasons: One is that it does come in through the nose, but the second is there is a receptor in some cells in the olfactory epithelium called ACE 2.

ACE 2 is a protein that basically binds to the spike protein on the SARS-CoV-2 virus. How the olfactory sensory cells then die is not really well understood, and that’s what we are studying. We know that it does infect your olfactory epithelium, but it does not infect the olfactory sensory neurons, which take the sensory signals to the brain. It infects cells that are next door (to sensory neurons), which are called sustentacular cells. So that’s part of what we’re doing: We’re trying to understand, first of all, what’s the process that takes place after infection, which is an inflammatory process – basically, it likely turns on immune responses – and how the virus reproduces in the epithelium. That’s important in that it goes down to the lung, which is of course where you have a lot of problems.

And how is it that we lose the sense of smell? The answer is: We don’t know.

How are you conducting your research?

Our team at the CU School of Medicine includes Maria Nagel, MD, professor of neurology and ophthalmology; Peter Dempsey, PhD, associate professor of pediatrics and developmental biology, who does work on organoids and cultures; and Vijay Ramakrishnan, MD, a surgeon and associate professor in otolaryngology, and he provides the samples of actual human olfactory epithelium that we then culture. Also, Tom Finger, PhD, professor of cell developmental biology, is leading parallel studies on loss of the sense of taste in COVID-19.

A lot of our research takes place in mice, but mice do not have the ACE 2 receptor. So we’re culturing human olfactory epithelium. We infect the cultures with SARS-CoV-2, which we’ve attained from two patients. So we infect the epithelium and see how it responds to the virus.

What percentage of people who develop SARS-CoV-2 end up losing their sense of smell?

Early in the pandemic, we started the Global Consortium of Chemosensory Research (GCCR) because something was obviously happening (to COVID-19 patients’ sense of smell). We developed a questionnaire – something anyone could fill out at home. We found that it was about 80% of people who had symptoms of COVID that lost their sense of smell, so it was a large percentage. A good number of them also had a loss of taste.

In terms of the sense of smell, one reason why you could lose it is because of inflammation that causes sinusitis. We found, in this study, that block of the nasal passage by inflammation was not the cause. The loss of smell from SARS-CoV-2 was very different from other cases.

How fast is the onset of this symptom?

It happens early on, within the first few days after infection. By six months, you only have a small percentage of people who are still without their sense of smell. In between, when you lose it altogether it’s called anosmia, and then as you regain it, there’s a subset of people who get parosmia, which is when you smell something you shouldn’t. Often, it’s fetid, something stinky, or the smell of garlic.

What’s going on in the neural circuits with parosmia?

Very likely what’s going on is that there’s a rewiring of the circuit, and it’s wiring to the wrong place, meaning it gives you the wrong quality, the wrong flavor. And that usually resolves, and the patient at the end is able to smell. Usually not as well as before (infection), but they do regain their sense of smell.

Is it possible that smell loss can be considered a good thing, inasmuch as it means your body is closing the pathway for the virus to the brain?

That is a question that we have: Could it be that there’s an immune reaction that takes place that is basically killing the olfactory neurons so that the virus doesn’t go to the brain? Very likely there’s some innate immune response in there that’s preventing direct entry into the brain. The problem with some of those other viruses (that do reach the brain) is that they could cause encephalitis, which is very often fatal.

In a separate but related NIH project, we’re studying with Maria a hypothesis that viral infection is an ancillary of early Alzheimer’s. It’s been very controversial, and we’re really trying to understand whether that is the case (of a connection), and whether infection of the olfactory epithelium is involved. The olfactory system has this very interesting property in that it goes directly to the brain and is a few synapses away from the hippocampus, which is a place in the brain that’s important for learning. So the question is whether there could be something happening there.

Loss of smell is well known very early on in Alzheimer’s, and it’s common in Parkinson’s. So it is found in a good number of diseases.

Some COVID patients have undergone “smell training.” What does that involve?

This was developed by Thomas Hummel, an otolaryngologist in Germany. They did work with people who lost their sense of smell for different reasons: for example, people with traumatic brain injury. They found if you give the patient different odors to smell, and if they open these jars and smell them at home, that it actually helps.

Is there a drug treatment you will test as part of the SARS-CoV-2 loss-of-smell study?

We are interested in testing drugs, and we have a couple of candidates we’re thinking about. Right now we’re very early on because we’re establishing the cultures and we’re infecting them. Yes, by all means, that is something we’re looking at.

Could your study have any implications for the “brain fog” and other neurological dysfunctions some COVID-19 patients have suffered?

It’s not that clear, but that is something we’re very interested in. Obviously, if at some point the virus goes into the brain – either through the olfactory route or the trigeminal route – then it could actually elicit some neurological problems. But again, it’s very early on, and we’re focused on the epithelium.

With the epithelium and olfactory system being directly connected to neurological function, your study could help scientists better understand how the virus behaves. Is that something you’re keying on?

And ultimately this understanding could inform possible treatments? 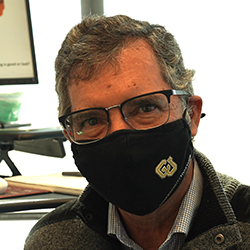