A study led by a University of Colorado Anschutz Medical Campus researcher reveals a key connection between viruses and inflammatory bowel diseases like ulcerative colitis and Crohn’s disease.

Breck Duerkop, PhD, assistant professor of immunology and microbiology at the University of Colorado School of Medicine, and a team of scientists focused on viruses inhabiting bacteria in the intestine known as bacteriophages or simply phages. 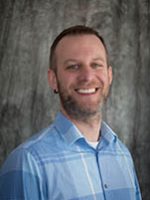 Breck Duerkop, PhD, assistant professor of immunology and microbiology at the University of Colorado School of Medicine

“Phage numbers are elevated at the intestinal mucosal surface and increase in abundance during inflammatory bowel disease (IBD), suggesting that phages play an unidentified role in IBD,” said Duerkop, lead author of the study published in the journal Nature Microbiology.

IBD poses significant health burdens worldwide and has inspired intense investigation into the environmental factors causing persistent inflammation of the intestine. Microbial communities are critical in maintaining intestinal health but changes in the composition of these organisms may cause an inflammatory response by the body.

According to Duerkop, most studies looking at how these microbial communities might spark inflammation have focused chiefly on bacteria rather than the viruses residing inside them.

When inflammation occurs, Duerkop found that phage communities change randomly leading to a genetic signature indicative of the inflammatory environment.

“We hypothesize that inflammation or other host defenses alter phage abundances during colitis,” the study said. “Such stresses could produce ecological disturbances in the intestinal environment, driving alterations within the viral community.”

Those disturbances could be the result of the viruses killing off beneficial bacteria in the intestine and allowing for `bad actor’ bacteria to cause inflammation and bowel disease.

The experiments were done with mice.

While the mechanics of how these phages operate will require further study, Duerkop said this discovery could lead to new kinds of treatment for these often debilitating diseases.

Clinicians could target certain bacteria with viruses to eliminate bacteria that lead to inflammation. Bacteria could be manipulated to circumvent the development of disease.

“We could promote the growth of good bacteria – a kind of phage therapy,” Duerkop said. “We could perhaps use phages as markers to identify someone predisposed to developing these diseases. While there is clearly more research to do, the potential is very exciting.”