Researchers at the University of Colorado Anschutz Medical Campus have found multiple genetic variants within the FUT2 gene that makes some people especially susceptible to middle ear infections.

“Middle ear infections are very common in kids,” said the study’s lead author, Regie Santos-Cortez, MD, PhD, associate professor of Otolaryngology at the University of Colorado School of Medicine. “By the time they are 1-year-old around half have fever, ear pain or pus/fluid in the middle ear due to infection. Some of these infections may recur or become chronic thus requiring surgery.”

The FUT2 gene is expressed in the salivary gland, colon and lungs but its expression in the middle ear has not been described previously.

Santos-Cortez and her colleagues discovered the role the gene played in middle ear infections or otitis media by initially examining DNA samples from 609 multi-ethnic families with the condition.

The study was published online today in the American Journal of Human Genetics.

The researchers found common variants of the gene in Filipinos and South Asians and a rarer variant associated with recurrent middle ear infections in European-American children. The most common variant occurs in 30-50% of individuals in almost all population groups except East Asians. 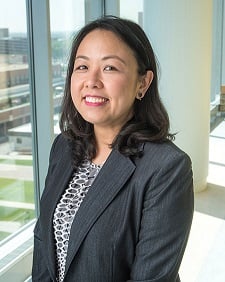 Regie Santos-Cortez, MD, PhD, associate professor of Otolaryngology at the University of Colorado School of Medicine

“A number of things predispose people to getting these infections including a lack of vaccinations, lack of breastfeeding and being around smoking caregivers,” said Santos-Cortez, who is also with the Center for Children’s Surgery at Children’s Hospital Colorado.  “But even in the best case scenario, recurrent or chronic middle ear infections still happen in some kids, which may be due to genetic predisposition.”

Those who possessed the genetic variants had a much higher chance of getting the infection. The researchers believe the gene modifies the microbiome of the middle ear in a way that makes it more susceptible to infection by specific bacteria.

“If you have these mutations, you will have a slightly different microbiota which could elevate the risk of disease,” Santos-Cortez said.

The finding could eventually lead to new ways of determining who is likely to get the infection.

The study confirmed expression of FUT2 in the middle ear which is spiked within 24 hours of bacterial infection. But the FUT2 genetic variants decrease presentation of A antigen used by bacteria to gain access to the middle ear lining.

That causes a decrease in some bacteria while boosting the numbers of bacteria known to play a role in chronic or recurrent disease.

“The frequency of population-specific FUT2 variants makes this gene a potential target for preventative screening and future treatments for otitis media, including modulation of the middle ear microbiome,” the study said.