Home / News / How the opioid epidemic shaped my family

As a breast cancer scientist with a PhD in cell and molecular biology, typically when I stand in front of an audience, I know what the hell I’m talking about. And yet, I recently found myself talking about monsters in front of an audience of community members at an event called “Science in the News: The Opioid Epidemic”, part of a monthly series aimed at demystifying hot topics in science to the general public. 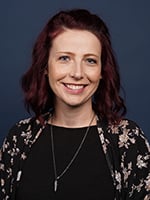 My name is Shawna Matthews, and I am a postdoctoral fellow in the Department of Pathology at CU Anschutz. I am not an expert on opioids and substance abuse disorders, unlike my fellow panelists of the night. Dylan Verden, a PhD student in the CU Anschutz Neuroscience Program, started the event by giving a talk titled “Opioids in the Brain”. Rourke Weaver, director of Business Development at Red Rocks Recovery Center, concluded by talking about how those struggling with substance abuse disorders can achieve recovery in a talk titled “Addiction and Community”.

So, why did I feel compelled to participate in this seminar? Because of monsters. As a scientist, I know that addiction, formally known as substance abuse disorder, is a disease. However, until recently, I secretly suspected those struggling with substance abuse would do anything and hurt anyone to get what they needed; I might have almost called them monsters.

I admit this not because I’m proud of what I used to believe, but because I want to tell you how my son, who is almost 3, changed my mind.

My son’s birth mom struggled with opioid abuse while she was pregnant. My son spent 92 days, nearly 14 weeks, in the neonatal intensive care unit (NICU) with neonatal abstinence syndrome. This is the medical term for withdrawal symptoms in babies exposed to opioids in the womb, including digestive problems, irregular heartbeat, extreme irritability, and, in some cases, seizures. During his time in the NICU, he needed daily morphine to control his withdrawal symptoms.

After he was released from the hospital, his birth mom was keeping up with her treatment program and worked closely with Child Protective Services. However, at some point, she relapsed into heroin use, and in December 2016, right before my son’s first Christmas, she overdosed and died. She was 21 years old, and my son was 7 months old. 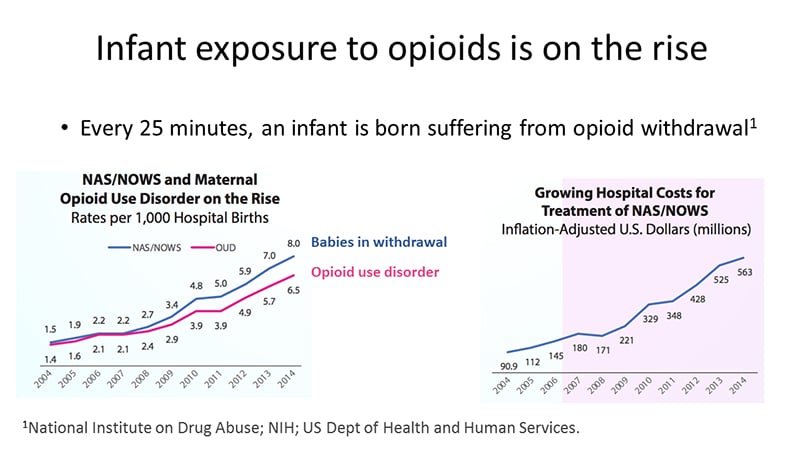 This graphic shows the steep rise in infant exposure to opioids in the United States.

Tragic though it was, surely the untimely death of my son’s birth mom was a rare incident. Surely this family’s precise pain could not be commonplace in an advanced society like ours, right?

Wrong. According to the Centers for Disease Control, more than 130 people in the United States die every day of opioid overdose. To put that in context, the risk of death due to opioid overdose is higher than the risk of death due to car accident (odds: 1 in 96 vs. 1 in 103, respectively). What is responsible for this systematic increase in opioid use and overdose? At the Science in the News seminar, neuroscience student Dylan Verden gave some clues by describing the vicious biology of opioid addiction.

Verden described how our bodies employ a lock-and-key system to find pain relief. “Our brain releases chemicals called endorphins (the key), which fit into opioid receptors in parts of our body needing pain relief (the lock),” he said.

Opioids such as morphine provide very effective pain relief because they are extra-sticky keys for the locks, compared to the endorphins our bodies naturally produce. Verden was careful to note problematic side effects of these sticky keys, including high rates of addiction and off-target effects including suppressed breathing, which contributes to death by overdose. 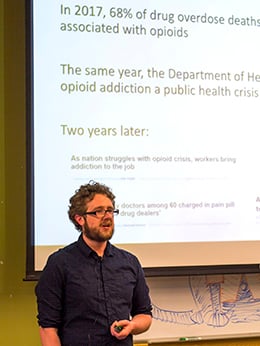 Dylan Verden, a PhD student in the CU Anschutz Neuroscience Program, talks about "Opioids in the Brain" as part of the "Science in the News" presentation.

Verden detailed how our brains very quickly learn to associate certain people, places and events with the euphoria that comes from opioid use, and conversely, how disappointment sets in when the environment does not deliver on the expectation. Consider also the extreme physical and mental symptoms of opioid withdrawal, which peak at 72 hours but last over a month, and it makes for an addiction cycle that is incredibly hard to disrupt.

The final panelist of the night, Rourke Weaver from Red Rocks Recovery Center, self-identifies as a person in recovery. Rourke spoke on the power of community and quoted the writer Johann Hari as saying, “The opposite of addiction is not sobriety. The opposite of addiction is connection.” Weaver called for more programs aimed at creating community so people suffering from substance use disorder can find a connection as they move toward recovery.

The crucible of parenthood

Establishing community seems especially difficult in new mothers struggling with recovery. Studies suggest that these women have higher rates of postpartum depression and an increased risk of stopping medication-assisted treatment early. With all factors considered, it is painfully unsurprising that accidental overdose is a leading cause of death in new moms who are struggling with substance abuse within the first year of their child’s life.

Returning to my son, here’s the rest of his “monster” story. When he was born, his birth mom was 20 and a single parent. In spite of having no maternity leave and returning to work at a minimum-wage job less than three weeks after giving birth, she was devoted to him and visited him in the hospital every day. She tried so hard to stay on her path to recovery but she ultimately relapsed and died of her disease.

The more I learned about my son’s birth mom, the more I felt my anger at her prenatal opioid use turn to grief at the loss of a young life and sorrow for a mother who would never know her child. As the saying goes, it’s hard to hate people up close.

How do we, as parents, protect our children from monsters? It’s not enough just to say that monsters don’t exist; we turn on the light so our children can see the truth for themselves.

Here’s the truth of my son’s story: his birth mom was not a monster.

Those struggling with substance abuse disorder are not monsters.

They are just people – messy, complicated people who are fighting against monumental odds of biology, environment and society.

I would leave you with a task, if I may. When you next see a news story on the opioid epidemic and marvel at the magnitude, remember that there are people behind those numbers.

Author’s note: Video recordings of the “Science in the News: Opioid Epidemic” event can be found at http://www.projbridge.org/sitn.html. These talks will be presented again on Thursday, May 16, at 6:30 p.m., at the Denver Museum of Nature and Science as part of the “Reality Bites” event at the Science Lounge for adults 21 and up. Tickets can be purchased at https://secure1.dmns.org/science-lounge-reality-bites-ages-21.