Edwin de Zoeten, MD, PhD, provides an overview of the history of pediatric inflammatory bowel disease treatment and research and where his current and future work is headed.

How do you solve a puzzle with hidden pieces? That’s the question researchers focused on pediatric Inflammatory bowel disease (IBD) face every day, as only 20% to 25% of their young patients under 5 years old present with a diagnosis-confirming genetic factor. Identifying the remaining children with the serious disorder presents a vast challenge.

Then the issue becomes: What’s the best treatment option for each patient, based upon their personal genetic markers? Gains are being made in personalized and immunologic therapies for IBD patients – essentially activating or educating the young patient’s own immune system against the disease – but much remains to be learned.

In the following Q&A, Edwin de Zoeten, MD, PhD, professor of pediatrics-gastroenterology, hepatology and nutrition at the University of Colorado School of Medicine and director of the Pediatric Inflammatory Bowel Disease Center at Children’s Hospital Colorado, discusses how precision medicine, protein research and biostatistics can help overcome barriers in diagnosing and treating children with IBD.

Precision medicine seems to be the focal point of a lot of your research around IBD. Can you talk about that area of study?

I'm going to talk about our 5-year-old and younger population that has a specific designation: Very early onset inflammatory bowel disease population – VEO-IBD. This population has a certain subset, about 20% to 25% of them, that will actually have an identifiable genetic mutation.

Now, with the advent of whole-exome sequencing, whole-genome sequencing, RNA-sequencing – all these different techniques that we can use both clinically as well as in the lab – we are able to take a subset of those and define what their mutation or what their alteration in a gene might be that is the underlying cause to their inflammation. Then we can target our treatment to that issue.

We had a paper that we published on a specific genetic disorder called CTLA-4 haploinsufficiency that can look a lot like inflammatory bowel disease. Patients can present with diarrhea, blood in the stool, abdominal pain, and inflammation of the intestine by biopsy. Yet, it doesn't really respond to the medications we typically use for IBD.

As we gradually are starting to define techniques in the lab that can help us pick out exactly why patients have inflammation, we can use that information to target the treatment we're using.

When you're using these genetics as part of the diagnosis and treatment plan, do you attempt different treatment options first to gauge their response? Or do you go straight to these more personalized approaches?

Yeah, that's a great question. Typically for these kids under 5, it automatically triggers our concern and decision process to do further testing. Along with our pediatric immunologists we do some basic immunologic evaluation to try to see if there's alterations that would suggest some underlying immunodeficiency. We then very quickly move to genetic testing and whole-genome sequencing.

Then with the 75% of cases where we don't define a genetic issue, we'll continue to keep an eye on those genes and see if there's other testing that we can do. At that point, there's a little bit of precision that goes into it, in that we're starting to look at what cells are present in the gut when we look at the biopsies, for example, that might suggest maybe there is a better medication. Our hope is as we move forward and as we do more research, we can start to be able to define these issues more quickly.

Can you explain what you found with your ongoing research into the protein lactoferrin and how it relates to IBD?

Lactoferrin is a protein that's produced in high quantities of breast milk, but also produced by other cells like the epithelial cells of the gut. And studies have shown that lactoferrin can have healing effects on the intestinal wall and affect the microbiome in the gut.

Those studies led us to look at this protein and see what it does to immune cells themselves. What we found is that the lactoferrin activates regulatory T-cells. Regulatory T-cells are the cells that calm the immune system down after it's been activated. It's a type of cell that has been shown to be very prevalent in inflammatory bowel disease. There’s a lot of them, but they don't seem to function the way they're supposed to.

And so what we've shown is that lactoferrin can activate those cells and make them produce cytokines and other factors that help calm down the immune system. We are able to show that there are changes in the regulatory T-cell when exposed to lactoferrin.

What is your next step in this research?

Our most recent grant is looking at not only that effect on regulatory T-cells, but what's actually happening in the gut. Are we attracting more T-cells to the intestine? We are also looking at other questions such as: what's the best way to give lactoferrin? Is it by mouth or is it injectable? Lactoferrin is an iron-binding protein also so we are looking at whether different levels of iron may affect how it functions in the intestine.

The grant is from the Department of Defense, and their interest is not just in inflammatory bowel disease, but also in infections that soldiers can get when they're out in the field. One of our goals is to look at a model of salmonella infection in the lab, so that we can study if lactoferrin blocks this and whether lactoferrin can treat this infection and speed recovery.

It's a needed therapeutic concept. Almost all of our medications that we use right now are immune inhibiting, and they can have a pretty global effect. They affect lots of cells in the immune system, not just the ones that are pro-inflammatory. For example, immunomodulators: They don't just block the T-cells that are causing the inflammation. They also block regulatory T-cells that inhibit the immune system response.

What are the future hurdles in the field of pediatric IBD?

Integrating the knowledge that we are developing. I think collaboration is going to be critical with not just other gastroenterologists, but with immunologists, biostatisticians, etc. Plus, there's a plethora of what's called big data that is becoming available. We can look at all the genes in the cell, look at which cells are producing what proteins, look at all the bacteria in the intestine and microbiome. This data all needs to be integrated in a logical way to improve our understanding of IBD.

I think that's where we're going to start to learn a lot. Combined with expanding age brackets – from those 5 and under kids to 10 and under, and 18 and under. And then eventually to 80 and under.

The goal is to get to a point where we can understand what a patient’s microbiome is doing with their immune system and how their background genetics are affecting it. That's where we're going to start to really be able to say, ‘OK, this is the best treatment for you, and these are the things we're going to need to do.’ 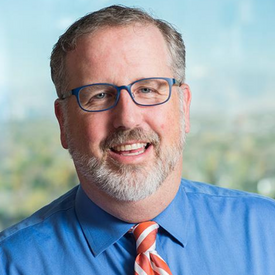