Home News Should You Extinguish Your Gas Stove? back to News

But the issue, which is not new to Jonathan Samet, MD, MS, dean of the Colorado School of Public Health and a national expert on respiratory health and inhaled pollutants, may have ignited some undue alarm.

“Certainly people know that there are sources of air pollution within homes,” Samet said, adding that cigarette smoking in homes was one of the worst indoor pollution sources identified, which, with education, has improved. “In terms of indoor air pollution, gas stoves are not as problematic as cigarette smoke was, but this is a somewhat misleading comparison.”

Samet launched a large study in the mid-1980s comparing respiratory illness rates in infants in homes with gas stoves with those without. The study found no statistical difference in illness rates or duration. He offers more perspective on the issue in the Q&A.

What is behind this sudden scare?

The paper that just came out (in the International Journal of Environmental Research and Public Health) and is being quoted in the news states that 12.7% of childhood asthma is attributable to gas stoves.

It’s important to note: This is a literature review study – a systematic review where researchers pulled together the different studies that had been done on gas stoves, and they calculated the level of risk. It's the same as when we look at tobacco and we say an estimated 88% or 90% of lung cancer is attributable to smoking.

In the paper, the researchers said, “Based on the epidemiological studies, here's how much the risk of asthma is increased for kids in houses with gas stoves compared to kids in homes without gas stoves.” And then in the next step, the authors consider, "Here's how widespread gas stoves are.” Then, the two numbers (risk of gas stoves and frequency of gas stoves) are used to calculate something called the attributable risk. The national figure attributing 12.7% of childhood asthma to gas stoves is calculated in this way.

In Colorado – based on American housing survey data of gas stove prevalence in homes – the authors say the figure is around 10% of childhood asthma is attributable to gas stoves.

What is the chemical presumed to cause the risk from gas stoves?

Nitrogen dioxide (NO2). It's the major emission from gas stoves.

Gas stoves can also produce some formaldehyde from heating at high temperatures, in addition to some other chemicals. There is chemistry in indoor environments where the emissions from the gas stove can interact with compounds in household products, generating different compounds.

Ventilating the stove during use should get rid of much of the NO2, which is just a good practice in general. Some cooking, frying for example, generates a lot of small particles in the air – which could prove irritating and produce coughing for some people. Ventilation while cooking makes sense. There’s a reason we have exhaust hoods over stoves, and people should use them.

Would you recommend getting rid of a gas stove?

No, I wouldn’t. There's been a lot of back and forth about this, and the Consumer Product Safety Commission said: We never intended to say you shouldn't get a gas stove. And some people prefer a gas stove for cooking.

As a first step, I think certainly I would advise against getting one with a continually burning pilot light – similar to many gas hot water heaters – although such gas stove models are uncommon nowadays.

What is your opinion on the asthma connection?

I understand that some epidemiological studies have made this connection. I am not aware of any recent review of all of the evidence by an authoritative body that has concluded that emissions from gas stoves cause asthma.

I think that there is still uncertainty about whether the emissions from gas stoves directly cause asthma. That's a bit complicated. I will say that there are studies the EPA uses in its standard setting process that shows there is a burden of childhood asthma that can be linked to outdoor NO2. But it's a complicated linkage because people measure NO2 as a good indicator of exposure to motor vehicle exhaust. This gas stove story is mixed in with the motor vehicle pollution story because NO2 is a shared pollutant between the two. There are many different potentially damaging chemicals in addition to NO2 in pollution in outdoor air from traffic.

What about hot water heaters and furnaces that are gas powered?

Well, those ventilate outside. People get in trouble with carbon monoxide poisoning if there's a failure of the ventilation with those appliances.

And actually, this whole story about un-vented gas fired appliances goes back to the 1960s. The first recognition of this as an issue was in Europe, where hot water heaters were in living spaces such as kitchens and bathrooms. One of the first studies was in the Netherlands where people had unvented heaters that emitted NO2 right into the rooms where people lived. And when measurements of NO2 were made, well, big surprise, in rooms with unventilated gas heaters, levels were elevated.

Can you talk about your study with infants and gas stoves?

To measure NO2, we used a very simple and low-cost passive sampler. We took two-week samples in the participants’ homes so that we could track what levels of NO2 the participants were inhaling. Over 18 months, we carefully tracked all the respiratory illnesses experienced by the children. Because of its size and the careful measurements of NO2, this was an important study. The results proved to be negative, showing no relationship between NO2 level and the rate of illness. The findings were important for indoor air and also for outdoor air, because the EPA regulates the concentration of nitrogen dioxide in outdoor air, making our results of significance to outdoor air pollution as well. Our findings were widely discussed at the time with the main paper published in 1993. So with these current conversations, there does not seem to be much memory of what went on decades ago. 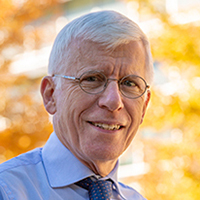