Home News At last, a beautiful smile back to News

A pair of words — beautiful smile — are heard all the time in dental and orthodontic clinics. These days, it’s practically an expectation for teenagers to, after wearing braces, end up with sparkling and picture-perfect teeth.

This wasn’t the case for Courtney Caudill. Whenever the Thornton teenager looked in the mirror, two other words came to mind: shark teeth.

This photo of Courtney's teeth was taken at another Denver-area dental clinic about five years ago, when she was starting high school.

“During my entire high school career, I barely found any photos of me showing my teeth,” she said. “It was a little sad and depressing that I was so embarrassed. You know, there was nothing I could do about it.”

She was born with ectodermal dysplasia, a condition that affects teeth, skin, hair, fingernails and eyes. In the mouth, the condition manifests in misshapen and often-missing teeth. Courtney’s permanent teeth didn’t come in until age 11 and her smile betrayed gaps where teeth should be. Many of the teeth that came in as permanents were conical-shaped — resembling those of a shark.

The condition left Courtney reluctant to smile much of her life, telling peers at every opportunity why she lacked “normal teeth.” Fortunately, teasing was kept to a minimum, mainly because her parents taught Courtney to be proud of herself and went out of their way to explain her condition to teachers and classmates. Entering college — she is currently a sophomore at CU Boulder studying psychology — the late-teen resigned herself to possibly no end in sight to this “very, very long journey” and “lifetime struggle.”

Her mother, however, did some research and found the CU School of Dental Medicine and its Adolescent Dental Clinic, operated by Rick Mediavilla, DDS. After Mediavilla saw Courtney in June 2016, he carefully selected Kevin Moore, DDS, who at the time was a third-year dental student, to complete her care. Mediavilla saw a gentle chairside manner and excellent care standards in Moore, who immediately clicked with Courtney and began plotting her course toward a perfect smile.

Her father, Christopher, calls Moore a “godsend.” “When we first came and met Kevin, I just knew God had sent him to us. It was divine intervention.”

Christopher is made of strong stuff — he’s an Army veteran who has done two hitches in the Middle East — but he’s been reduced to tears — once when Courtney got crowns on her bottom teeth in May, and again when she received upper crowns in mid-October. Both procedures were performed by Moore, who is now in the general practice residency program at the CU Dental School, and overseen by Mediavilla and David Gozalo, DDS, a prosthodontist who specializes in replacement and dental implants. 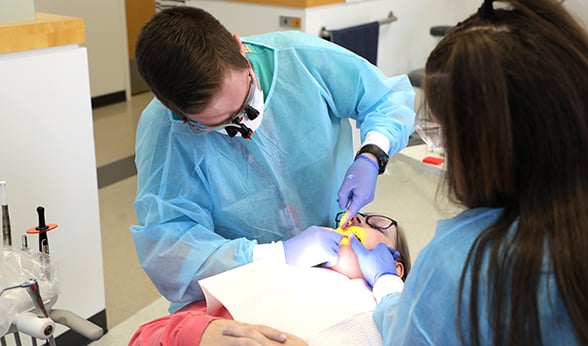 After the latest crowns were placed, Courtney sat still in the dental chair, staring out the window and letting the profound change in her appearance soak in. The teen may have reflected on how, about two years ago, when a different Denver dentist suggested implants, at an out-of-pocket cost of $35,000 (the provider didn’t take her family’s insurance), she weighed the options and declined. Courtney knew that without sufficient upper-shelf bone, which was the case in her mouth, implants can fail.

Undoubtedly, the many disappointments she had endured over the years flooded her mind.

Christopher, meanwhile, stood nearby with reddened eyes. He could see the relief in his daughter’s expression. “We’ve noticed her whole demeanor has perked up incredibly,” he said. “She’s never let it bother her much, but now she’s persevered and she’s always smiling.” 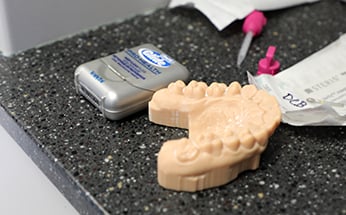 A model of Courtney's new smile was created using a state-of-the-art software program and a 3D printer.

The story of this cutting-edge care in the CU Dental School includes a generous donation from Peebles Prosthetics, Inc., which supplies “removables” — dentures and arches — as well as “fixed appliances” — multiple-teeth bridges — to the CU Dental School. For Courtney’s upper mouth, she received a pair of three-unit bridges, which were fabricated by Peebles in consultation with the CU dentists. Company owner Rick Peebles watched the two fixed appliances — a donation valued at about $1,100 — transform Courtney’s smile at the Oct. 19 appointment.

“Kevin told us about Courtney’s case and asked us about (a donation),” Peebles said. “We thought it was a great cause, and we like what he does as both a person and a dentist. A lot of the kudos should go to Dr. Moore for being a champion for Courtney.”

Moore credited Peebles and his firm, because without their donation the dental work might not have been financially feasible for Courtney’s family. Lonnie Johnson, DDS, senior associate dean of clinics and professional practice in the dental school, ensured completion of the project by covering costs not met by Peebles and the family.

Moore had performed a similar procedure on an 86-year-old patient, but Courtney’s case was profoundly different. “This is definitely rewarding,” he said. “With a teenage girl, giving her a smile is pretty emotional and impactful.”

The final product of Courtney’s crowns started with the dental school’s Trios scanner, which makes an oral impression by scanning teeth digitally, allowing them to be designed to the patient’s specifications. A model of her new smile was also created — the analog way — using a state-of-the-art software program and a 3D printer. Lastly, both the model and the digital imaging were sent to Peebles Prosthetics, which fabricated Courtney’s crowns using technology that further improves the design and quality of dental restorations.

“Restored” couldn’t be a more apropos term. The journey that has stretched over a dozen years, and taken the Caudills to multiple dentists, has at long last come to an end. Courtney finally has a complete and picture-perfect smile.

‘This is definitely rewarding. With a teenage girl, giving her a smile is pretty emotional and impactful.’ — Kevin Moore, DDS

Christopher said, “I’m just so absolutely grateful. I don’t think I’ll ever be able to repay everyone for everything.” He looks to the CU Dental School to perform a similar miracle on his 13-year-old son, who suffers from an even more severe case of ectodermal dysplasia. “One down, one to go,” he said.

Courtney, meanwhile, finds herself shedding the occasional tear of happiness. Mostly though, she’s flexing those smile muscles that she has restrained for so many years.

“I’m loving my teeth,” she said, after living with her new crowns for a couple weeks. “I don’t think I’ve ever smiled this much in my life!”