Home News The state of cancer in Colorado back to News

According to the U.S. Centers for Disease Control, Colorado has the fifth lowest overall rate of cancer in the United States, behind only District of Columbia, Arizona, New Mexico, and Nevada. And the American Cancer Society recently reported that the U.S. cancer death rate has dropped 27 percent over 25 years.

In Colorado, the decline in the cancer death rate is even steeper: 31 percent reduction over the same period. Does this mean that cancer in Colorado is a concern of the past?

Not so fast, says Myles Cockburn, PhD, co-leader of the University of Colorado Cancer Center’s Cancer Prevention and Control Program.

Room for improvement in Colorado 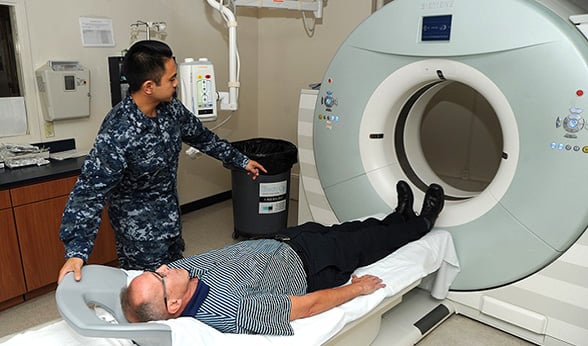 A patient at Naval Hospital Pensacola prepares to have a low-dose computed tomography test done to screen for lung cancer. There is room for improvement in cancer screenings, according to Myles Cockburn, PhD, co-leader of the CU Cancer Center's Prevention and Control Program.