Several years ago, Don Becker, a Navy veteran, was diagnosed with a ‘ticking time bomb’ – high-grade pancreatic cancer. Richard Schulick, MD, director of the CU Cancer Center and chair of the CU Department of Surgery, saved Becker’s life by removing 40% of his pancreas.

Steve Becker always looks forward to Veterans Day. He and his father, Don, both did hitches in the Navy, so it’s a special day they set aside to hang out and reflect on their service to the nation.

About five years ago, however, they got a shock. A physician in Longmont, investigating a bulge in Don’s abdomen, discovered a mass on his pancreas. The doctor and Don’s daughter, who is a nurse, both recommended he immediately get an appointment with Richard Schulick, MD, director of the University of Colorado Cancer Center and chair of the Department of Surgery.

The Cancer Center multidisciplinary team consulted on Don’s case, and the diagnosis was one of the worst anyone can hear: pancreatic cancer. 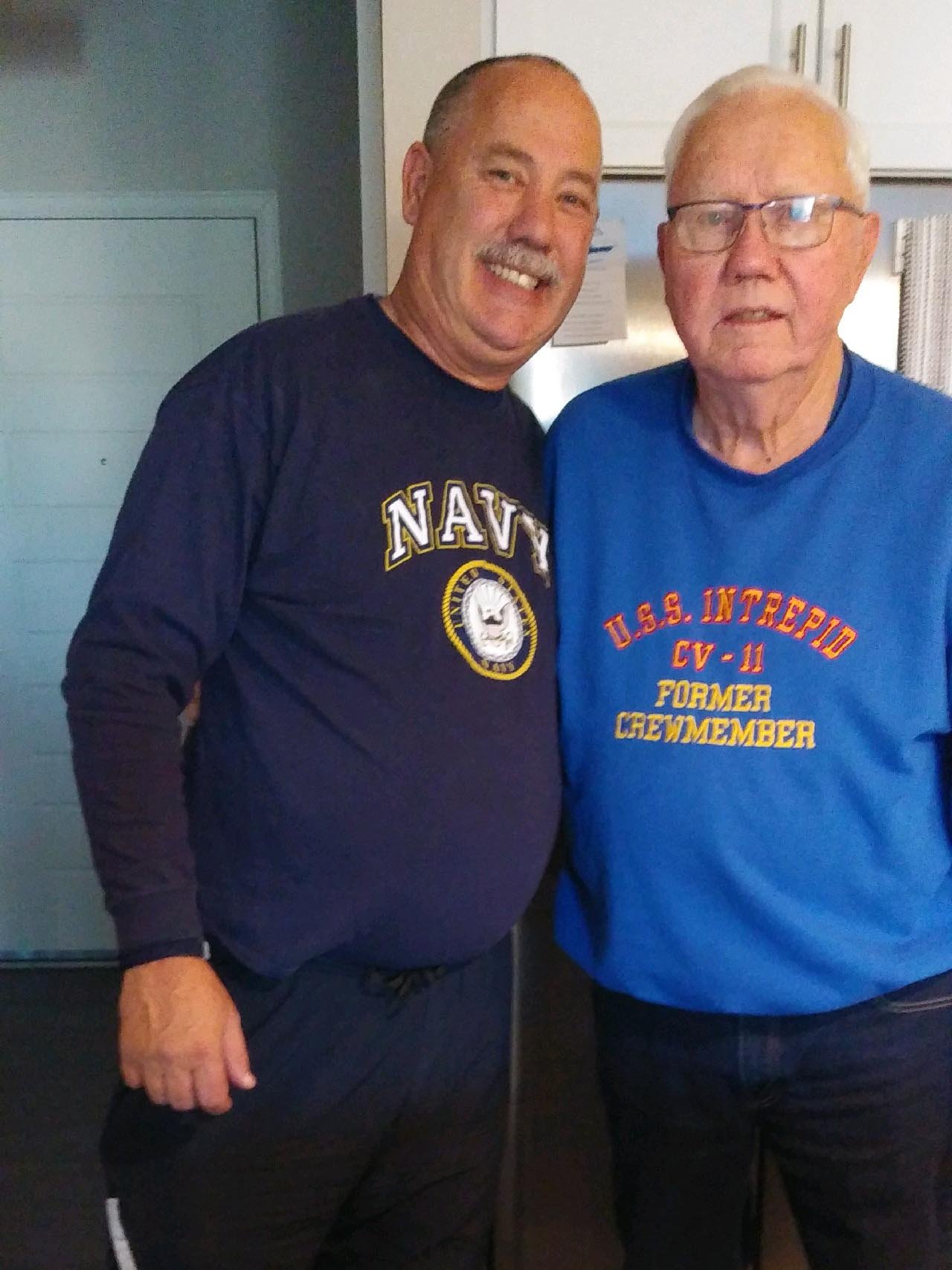 Steve and Don Becker celebrate Veterans Day in some of their Navy gear.

“When I heard the diagnosis, I was kind of shocked,” said Steve, who works in Facilities Management at the CU Anschutz Medical Campus. “I was real concerned about my dad.”

Knowing many medical people on campus helped put Steve “more at ease,” but he was all too aware that three people in his department had died of pancreatic cancer as well as a friend’s mother. “It’s not normal to survive it,” he said.

Because there’s no way to detect pancreatic cancer until it’s generally too late, it often comes down to luck if a tumor is found at an early stage. Don’s luck was the hernia that prompted a visit to the doctor.

“That hernia saved my life, so to speak,” Don said.

Don Becker looks forward to many

with his son Steve.

“It was a ticking time bomb,” said Schulick. Don’s tumor was stage 2B and “high grade,” meaning it was dangerous. “We caught it at just the right time. It had already spread to some lymph nodes, and it was on its way to spreading everywhere.”

Schulick performed the surgery at University of Colorado Hospital on Oct. 1, 2014, about a month shy of Veterans Day.

Don was in the Navy from 1955 to 1959, serving on the East Coast and in the Mediterranean and Caribbean before finishing his tour in Corpus Christi, Texas. Steve did four years active service and 16 more in the Navy Reserve. At the end of his active tour in the mid-1980s, Steve called Don and asked if he’d like to meet the ship in Seattle and join the final leg to San Diego.

“He said, ‘Just tell me where I need to be and I’m there,’” Steve recalled. “I never had so much fun with my dad. To be with him and kind of bring back those memories (of his time in the Navy). That to me was the highlight of my career.”

When Steve retired from the Reserve 15 years ago, he presented his dad with a U.S. flag. It signified both respect – Don had inspired him to join the Navy – and the shared experience of serving at sea.

Don had a neuroendocrine tumor, which represents only 5% of pancreatic cancers. It’s the type that Steve Jobs, the co-founder of Apple Inc., died from in 2011.

With Schulick and the many other renowned experts on his team, the CU Cancer Center is able to operate on 30% or more of pancreatic cancer patients, nearly double the national average. The CU Cancer Center was recently named a National Pancreas Foundation Center of Excellence for pancreatic cancer, the only such center in the Rocky Mountain region.

In Don’s case, Schulick removed 40% of the pancreas as well as a few lymph nodes. He also repaired the hernia.

“I was told (Dr. Schulick) is a top doctor in pancreatic surgery and very specialized,” Don said. “I was very much at ease when I went in for surgery, and Dr. Schulick did not let me down. He did a wonderful job and was very caring afterward.”

After the surgery, Don underwent several cycles of chemotherapy, leaving him cancer free. He’s had CAT scans every six months since, and they’ve been clear until two years ago when something appeared to be growing on the pancreas abdominal wall where the original tumor was located and removed. The small mass disappeared after several rounds of radiation therapy and, since then, Don has remained cancer free.

The removal of nearly half of his pancreas caused an onset of diabetes, which Don manages by taking pills twice a day and watching his diet. He suffered a mini stroke a couple years ago and now walks with a cane. 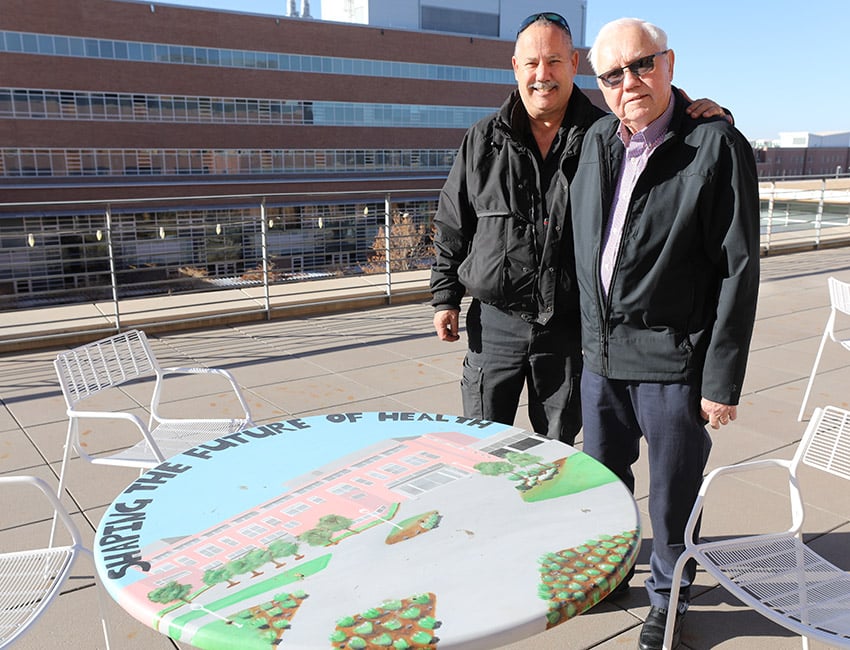 Steve and Don Becker next to one of the table tops painted by Savanna Becker on the balcony of the third floor of the Education 2 Building.

“His life expectancy is pretty much back to normal at this point,” Schulick said. Upon meeting Don and Steve recently in his office – the first time he’d seen Don in a few years – Schulick said, “This is what it’s all about. It’s why I and the whole team  do this – to see you and other patients like you years later.”

At age 82, Don enjoys a relatively high quality of life. He and his wife recently moved into a senior independent living facility in Longmont and regularly see their three children, seven grandchildren and one great-grandchild. Savanna Becker, 14, plays for her high school golf team, following in her grandfather’s love for the sport. Savanna, one of Steve’s children, also has ties to CU Anschutz as she recently enhanced the campus by painting two table tops on the balcony of the third floor of the Education 2 Building.

Although Don doesn’t play golf anymore, he enjoys strolling the links in support of Savanna. “I could probably use my 7-iron as a cane,” he jokes.

While there’s no way to be certain, Don believes it was the 14 years he worked at the now-shuttered former nuclear weapons factory Rocky Flats that caused his cancer. He notes that several of his plant coworkers have died of cancer. “We knew the materials we were working with were dangerous,” he said. “We respected that and handled them very carefully.”

The only remnant of his pancreatic cancer is a hardly visible scar. He looks forward to many more family gatherings and Veterans Day celebrations with Steve.

“I had the best surgeon,” Don said. “Pancreatic cancer is one of the worst. I feel very fortunate the way things turned out, that Dr. Schulick got it all.”

Photo at top: From left, Steve and Don Becker with Dr. Richard Schulick in Schulick's office at the CU Anschutz Medical Campus.