Home News Nevertheless, she persisted back to News

When Victor Spitzer, PhD, director of the Center for Human Simulation at the University of Colorado School of Medicine, talks about his friend Susan Potter, he often describes her as “persistent.”

Persistent because she refused to take no for an answer when she volunteered to donate her body to his Visible Human Project. Persistent because, after he accepted her request, she kept pushing when Spitzer initially refused to show her the large freezer where he stores cadavers, and the equipment he used to grind them into slices nearly the width of a human hair.

‘We need to bring her back to life, to develop a living cadaver.’ – Victor Spitzer

Now, almost four years after she died from heart disease, Potter persists in a most profound way. She’s been frozen, sectioned and sliced — all in support of medical education. And now she exists in 27,000 photos taken of her entire anatomy, which is gradually being assembled in high-resolution digital form.

Deep within the Fitzsimons Building, Spitzer sits in his laboratory which is festooned with roses on walls outside the freezer; the paintings were done by two students in the master’s program in Modern Human Anatomy. Potter, who was known as the flower lady at the Ninth Avenue and Colorado Boulevard location of the CU Health Sciences Center, requested that flowers be kept near Spitzer’s freezer, a place she always felt needed some brightening.

“I would think Susan is smiling because she ended up where she wanted,” Spitzer said. “She wanted to end up in the students’ minds.”

That’s the abridged version of an unusual story.

This is what Potter read in a newspaper about the National Library of Medicine-supported Visible Human project some 25 years ago: A CU team led by Spitzer and David G. Whitlock, MD, PhD, had sectioned off, from head to toe, both a male and female cadaver, using a calibrated machine to grind off layers to as small as one-third of a millimeter. Each layer of the body was then photographed. Spitzer’s team took thousands of photos and then organized the data to allow users to interactively tour a virtual human body.

Now, another array of photos will document Potter’s story to a worldwide audience. National Geographic assigned a photographer and writer to chronicle Potter’s unusual journey. Back in the early 2000s, the magazine thought it would be a one-year assignment. Potter had been in a serious car accident, was in a lot of pain and was mostly confined to a wheelchair. She expected to die within a year. “National Geographic came on board to document her life for the next year and, in fact, continued on for the next 14 years,” Spitzer said.

When Potter lodged her request, Spitzer didn’t plan to become her friend. “I didn’t want to become her friend; I wasn’t particularly happy about imaging and sectioning my friend,” he said. “I knew her back when she sold flowers in front of the chancellor’s office on the Ninth Avenue campus every Christmas. She did a lot of things to support the medical school. This was her last wish to support it as best she could, in donating her body.”

And, because technology improved since the original Visible Human project in 1993, much more detail will be seen in Potter’s virtual anatomy. The original Visible Human was ground into sections of 1,000 microns for the male (300 microns for the female); Potter’s body was ground off 63 microns at a time, resulting in thousands more photographs being taken. By comparison, a human hair is about the same diameter. 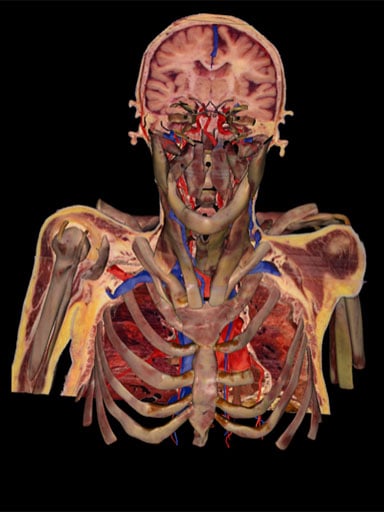 Spitzer’s lab isn’t stopping at photos. Through his company, Touch of Life Technologies, located in the Fitzsimons Innovation Community, he is developing ways to fabricate the feeling of living tissue. “There’s no reason for us to keep a virtual cadaver,” he said. “We need to bring her back to life, to develop a living cadaver, one that you can see move or move in response to what you ask her to do. Being able to feel and touch and see is something very doable today.”

Assembling the images is a small part of the overall project. Identifying everything in Potter’s body is an enormous task. When she is fully rendered, along with the material collected by National Geographic, medical students will be able to sift through her anatomical data, while getting a picture of her psychological background.

Potter’s background is somewhat murky. She didn’t talk much about her childhood, only that she grew up in Germany under difficult circumstances. As an adult she was plagued by health issues, confined to a wheelchair but always looking for some way to give back to the CU School of Medicine. “We care about everything,” Spitzer said. “We want to correlate the anatomical with her feelings and her behavior, which is more the social sciences.”

Support from the School of Medicine, the Department of Cell and Developmental Biology and his company allowed Spitzer to create a living cadaver of Potter. Still, many more donations are needed. “We need to look at the anatomy of the virtual world as close as we do in the real world,” he said. “Someday, we need a bookshelf of bodies, or virtual human anatomy, from the very young throughout the aging process,” including people of all ethnicities.

She continues to talk to students

Early in their medical school career, CU medical students are introduced to the cadaver process and hear from people who want to donate their bodies. Potter spoke to the class, and several students ended up following her life as they moved into their professional careers.

“Susan has passed, but the last two years she has continued to talk to our students through video recordings saying why she’s donating, how she’s trying to help them and the whole health care profession,” Spitzer said. “So, she’s already in front of our medical students, just not her anatomy. Next year, they’ll see some of her anatomy, and every year they’ll see more of her anatomy.”

In the video recordings of her life, they’ll also see how passionate she was about furthering the understanding of the human body. “She told people she would be in a freezer,” Spitzer said. “She agreed — but not at first — to being on the internet for the entire world to learn from her. She mainly wanted to be a donation to help the students at CU.”

When it came time to section Potter’s 87-year-old body, the professor was able to distance himself emotionally from what he was doing to his friend, the flower lady. “She was my friend, and I was happy to do what she wanted me to do,” he said.

He then paused and added, quite matter-of-factly (as you might expect of a scientist): “From dust thou art, to dust thou shall return.”