Women in hospital medicine face major obstacles during pregnancy, parental leave and returning to work, prompting a discussion about gender equity in medicine, according to a new study from researchers at the University of Colorado Anschutz Medical Campus. 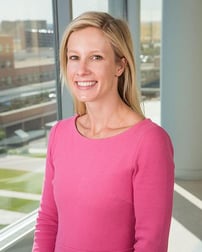 Emily Gottenborg, MD, assistant professor in the division of Hospital Medicine at the CU School of Medicine

The study, published recently in the Journal of Hospital Medicine, includes wide-ranging interviews with 10 female academic hospitalists from institutions around the country. They were asked about their experiences during pregnancy, parental leave and the challenges of returning to work including barriers to breastfeeding and diminished career opportunities.

“It is commonly thought that the medical profession is more enlightened around parental support than other professions, but it really isn’t,” said the study’s lead author Emily Gottenborg, MD, assistant professor in the division of Hospital Medicine at the University of Colorado School of Medicine. “We found a lack of paid leave policies in academic settings, difficulty in support for breastfeeding, and loss of career opportunities when new parents return to work.”

Gottenborg said hospital medicine is unique in that 47 percent of practitioners are women and 80 percent are under age 40, indicative of a large proportion of women entering the profession during a time in life when many want to start a family.

“The field poses known challenges to this population, including shift work, atypical schedules and unpredictable hours,” Gottenborg said. “Our goal was to both explore the challenges to undergoing this experience and discovering solutions to support female academic hospitalists.”

Most participants described inadequate paid parental leave that resulted in haggling with managers, human resources and administrative staff for time away from work with their newborns.

“All of my leave was unpaid…managed to finagle short-term disability into paying for it…the system was otherwise set up to screw me financially,” one research participant said.

All of the women described significant physical challenges when working during pregnancy.

Breastfeeding, extolled by the medical community for its long-term benefits to children, was an endless challenge, the study said. Privacy was often elusive.

“It’s two chairs that are behind a curtain in a women’s locker room in the basement of the hospital, that are tiny and gross,” said one physician.

“I would get to work, set up, and pump while chart reviewing. Then I would go and see people…and come back to my office and pump and write a few notes. And go out and see more patients, and then pump. I was like a cow.”

Some stopped breastfeeding early because of these difficulties.

Many of the physicians interviewed faced serious career challenges during this period. Sometimes they were left out of projects or not asked to participate.

“People feel they are missing out and their career suffers,” Gottenborg said. “One of the reasons women are not in more leadership positions in medicine is because of these big breaks in their lives.”

The study calls for a more generous paid leave policy that not only includes maternity leave but a flexible scheduling period before and after the leave to account for the challenges of pregnancy and new motherhood.

“Paid parental leave is rare in academic settings, but studies from other industries show that when women take paid leave, they are more likely to remain in the workforce 9-12 months afterward, work more weekly hours and feel more loyal to the organization,” the study said.

“As medical professionals we should be in the forefront of this kind of change,” she said, “not lagging behind.”