As the pandemic quickly spread across the U.S. last March, Associate Professor Meredith Mealer, a researcher of mental health and burnout issues among healthcare professionals, thought, “How can we best help and reach as many people as possible?” The answer was “Narrative Expressive Writing,” a writing program that has helped over 1,100 participants locally and nationally.

Writing patient notes is just part of the daily routine for doctors, nurses and other providers. It’s a rare occasion, however, when providers are asked to look inward, to search their own feelings and write about them.

What happens when they get this encouragement? What kinds of stories emerge, especially during a historic pandemic?

Some of the answers can be found in “Narrative Expressive Writing (NEW).” Expressions about this challenging time — waves of sorrow, nightmares, paralyzing guilt, fear of death and other stressful feelings — have poured forth through this flexible, non-intrusive program launched at the University of Colorado Anschutz Medical Campus.

Meredith Mealer, PhD, an associate professor of Physical Medicine and Rehabilitation in the University of Colorado School of Medicine, collaborated with local mental health colleagues to create the writing program for frontline healthcare professionals. As the pandemic began to quickly spread across the United States last March, Mealer’s thought was, “How can we best help and reach as many people as possible?” The idea was to offer a flexible program that people could join at low cost – it’s free – and remain anonymous. 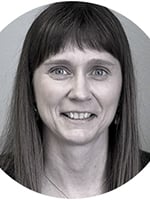 NEW has continued since, so far enrolling 1,100 writing participants nationally, including about 300 who work at the CU Anschutz Medical Campus and the Veterans Affairs Medical Center.

Mealer, a researchers and psychiatric nurse practitioner, has studied the mental health of healthcare workers, especially nurses, for 20 years. Post-traumatic stress syndrome (PTSD), anxiety, depression, burnout and other mental health issues are prevalent in this group.

“I’ve always known that on a good day, without a pandemic, the stresses and traumas of the acute-care environment has caused symptoms of psychological distress for providers,” Mealer said. “So with COVID, I anticipated that it would be even higher. And I think that’s coming to fruition.”

The program offers complete anonymity, giving participants prompts to write for 15 to 20 minutes each week for five weeks. It follows the structure of Written Exposure Therapy Intervention (WETI), a proven therapeutic program used for the treatment of PTSD. But unlike WETI, NEW adds the component of having a mental health expert read and respond to the weekly entries. Mealer wrote a manual that offers guidance on how to respond to various submissions, such as what to say if participants get stuck in their writing.

“The idea is that we’re trying to build resilience (among participants) by promoting cognitive flexibility and reframing of the experience,” she said.

All of the exchanges occur within a REDCap (research electronic data capture) database. Depending on what’s written by participants, the trained responders offer resources such as crisis hotlines and other referral resources.

• “He would need a breathing tube to save his life and help his lungs.

The pure terror in his eyes instantly made my eyes fill with tears.”

colleague or a friend. I've had nightmares.”

• “I feared giving it to my husband who would then spread it to kids,

their parents, their caregivers and their grandparents. The amount

of guilt I placed on myself the first few weeks was almost paralyzing.”

• “Mostly I thought of my kids. They were so young, would they

remember me if I die? Should I, could I kiss and hug them if I

got sick? Was there a chance this would kill me?

Was there a chance I would get through this?”

“We’ve had a lot of different feedback,” Mealer said. “Some things are like, ‘Hey, I was feeling suicidal, and these writing sessions really helped me process what was happening, and I feel like I’m in a better place. We’ve also had people say, ‘I think I’m going to take these writing prompts with me to my therapist, continue to write and ask if my therapist will provide feedback.’”

Feelings resemble those of combat veterans

About 15 local mental health experts volunteer, and they enjoy being responders, Mealer said. “Since they work a lot with veterans with PTSD, they are struck with how this resembles combat veterans,” she said. “Here, they’re reading similar feelings, emotions and stories coming out of this.”

Mealer said participants’ narrative themes include fear of becoming infected with coronavirus and bringing it home to their families, as well as heightened feelings of stress and isolation. “There have been themes around, ‘I had issues with anxiety and depression before the pandemic and now, especially working in healthcare, I try not to go anywhere other than to work and home, so I’m feeling extremely isolated and alone.’”

Some participants express heavier-than-normal drinking, while others share frustrations about staff shortages at work. “There was just so much going on in 2020,” Mealer said. “A lot of people brought in politics, what was happening with the federal government and its response to the virus. The pandemic, the Black Lives Matter movement – all of that came in.”

Mealer, who is also a responder, occasionally sees a weekly entry that takes her an hour to read. When starting the program, participants provide a few demographic details and select where they fall on a visual analog scale of 0 to 100, with 100 being the highest level of perceived stress.

In general, “what I’ve seen (at the end of the five-week program) is about a 10-point reduction in perceived level of stress on the scale,” she said.

NEW is just one of many mental health resources the university has rolled out in response to the pandemic. The anonymity aspect has likely increased participation, she believes.

Some participants decide to do another cycle, while others have asked for a five-week summary in order to continue writing at home.

Mealer plans a program post-mortem, using the data to apply for a grant that will allow her to study the effectiveness of a narrative/response intervention on mitigating stress in healthcare workers.

But that’s a ways off, as Mealer expects NEW to continue for many months. “I think we’ll keep this going for at least another year,” she said. “The consensus is that even though we’ve had great participation nationally and locally, there’s probably still a lot of people who are so caught up in the work right now that they haven’t had time to really process or think about processing.”