Shannon Vogel Perry has dedicated her life to serving, whether through scholarship, in the classroom, or abroad. She graduated with her master's from the University of Colorado College of Nursing in 1971.

Even before attending CU Nursing Perry found herself developing innovative operations to offer care to populations in need. In 1967 she organized the first flight to transport premature babies via helicopter in Peoria, Illinois. In 2017, on the exact date of the flight, fifty years later, Perry flew to Peoria and took a helicopter flight to commemorate the momentous event. 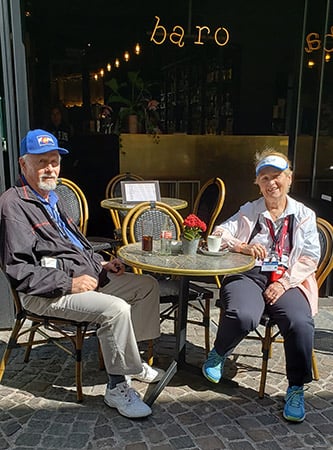 Bill and Shannon Perry on a recent trip.

Perry’s career as an educator brought her to teach at many institutions including Arizona State University and Vanderbilt University School of Nursing. At Vanderbilt, Perry was recruited and hired for the purpose of creating a maternal infant graduate program – the first of its kind in the 13 southern states. Most of her career was at San Francisco State University where she was also the Director of the School of Nursing from 1994 to 1999.

Naturally a scholar, Perry worked to complete her PhD in 1980 and advises young nurses to practice academic curiosity and to join professional organizations. Throughout her career, she produced research, academic articles and even textbooks that are still in use: Maternity and Women’s Health Care and Maternal Child Nursing Care. Today Perry stays in touch with the nursing community through the American Association for the History of Nursing.

Perry has worked incredibly hard throughout her career to provide exemplary care and education. In 2000 the CU Nursing Alumni Association awarded her with Distinguished Alumna of the Year.

As a nurse for sixty years, Perry has had a constant drive to help those in need. Although Perry retired in 2003, it hasn’t stopped her humanitarian pursuits. Her travels include medical missions to places such as Honduras and Africa. In 2012, she and a group of 48 women climbed Mount Kilimanjaro to raise awareness of human trafficking. Together they raised over $350,000 and broke two world records.

Throughout her academic and humanitarian efforts Perry’s husband, Bill Perry, has been encouraging and supportive, especially with child care. October 3, 2020 is a special day for the Perry family. She and Mr. Perry will be celebrating fifty years of marriage! They hope to celebrate with their daughter, Julie, her husband, Darren, and grandchildren, Alex and Zoe.