From typhoid to smallpox to the Spanish Flu, we’ve had no shortage of epidemics in the US in the last 100 years and no shortage of nurses to help care for the ill. Now, it’s the coronavirus. Precautions were simple 100 years ago – isolation, bloodletting, inhaling steam and ice baths. But not very effective. In some ways, we’ve come a lot farther and in others, we are resorting to the same tried and true methods of containment. Digging deep into the CU Nursing archives at the Anschutz Medical Campus uncovered a real-life account of a nurse who helped battle the Spanish Flu of 1918 and survived one of the most devastating pandemics in history. 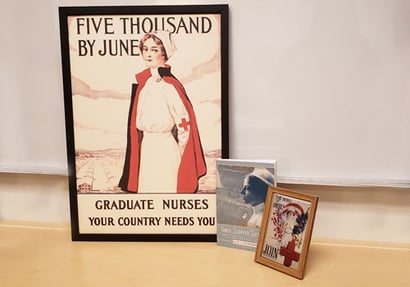 Shellabarger was an Assistant Chief Nurse in London. Her diary -- memorialized in her biography titled Three Scuffed Suitcases -- recounts what it was like to be on the frontlines of the Spanish flu and might be similar to how nurses feel today battling coronavirus.

Shellabarger lived through the flu that killed 50 million people worldwide. Perhaps she survived because she was a little older – 39. Most of those who died were young adults, in the prime of their lives.

The CU Nursing History Center at the Anschutz Medical Campus is open Tuesdays from 9 – 4 p.m. Get a glimpse into the past. Read accounts of nurses and see how they lived.