“This is the hardest thing I’ve done in years.”

Those were the words of one of four judges who had the task of perusing, paring and picking just three winners from two dozen posters lining the Education 2 North-South Bridge on Sept. 5.

Bachelor’s, master’s, DNP and PhD students were all represented at the event, which kicked off the first-ever College of Nursing’s Research and Scholarship Symposium on Sept. 6 and highlighted the level of scholarship among its students. CU Data Science to Patient Value (D2V) co-sponsored the symposium.

About 75 attendees milled about the poster-lined bridge, including Dean Elias Provencio-Vasquez and the next day’s keynote guest speaker: Thomas Clancy, health informatics expert from the University of Minnesota. 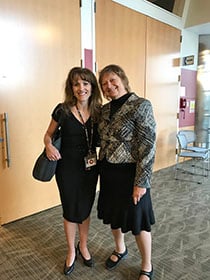 Associate Dean for Research Teri Hernandez and Chair of the Research Advisory Committee Mary Beth Makic welcomed the crowd and acknowledged the “man who made it all possible,” Jason Weiss, CU Nursing’s research and publication senior professional.

Here is a snapshot of the students’ work:

Combining creative arts therapy with chemotherapy
Jennifer Raybin, MSN, RN, CPNP
Pediatric palliative care program leader, Children’s Hospital Colorado
PhD Program
Jennifer Raybin Poster 8-30-19
A 10-year-old girl smiles for the camera as she holds her artwork — a picture of a dangerous-looking creature — in front of her chest. Plastic tubes poke out from behind the masterpiece, covering her lap. Peach fuzz tops the little girl’s head as she beams up from her hospital chair.

Called a ‘Narwhal-a-saur,’ her creation “might look a bit mean,” the little girl explained in a narrative on the other side of the research poster bearing her photo. “But he is really nice. His sharp teeth and horns contain healing powers,” said the girl, a cancer patient. “When he bites or pokes a person, it doesn’t even hurt.”

After two decades in pediatric oncology, CU Nursing PhD candidate Jennifer Raybin has seen her share of suffering, watching her little patients struggle with pain, illness and the concept of death.

As a lifelong dancer and lover of the arts, Raybin also knows creative work makes people feel better. Her poster project focused on her work with her young patients and creative arts therapy (CAT), which employs art, music and movement.

Raybin knows CAT studies in adult cancer patients found improved quality of life and hopes adding a little fun and creativity amid the drug infusions and needle pricks can help her little patients. She received funding for her research from the American Cancer Society.

“It started with out-patients coming to the infusion center for their chemotherapy treatments,” she said of her first CAT study.

While their therapeutic drugs slowly dripped into their veins, the children would join in a circle, finger-painting, playing parachute and building popsicle-stick sculptures, Raybin said. “Or, sometimes, they’d beat on drums to get their anger out.”

Now her work has resulted in the hiring of fulltime creative arts therapist Patricia Mowry for the cancer center at her hospital, a big win for her and her patients, she said.

Raybin upped her research with nearly 100 pediatric patients and their parents taking part in this poster-focused go-round. Parent response suggested improved quality of life for the children, but Raybin said more research is needed.

“Anything that supports them along the way is going to make a difference.” 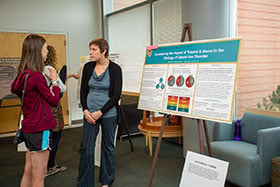 Destigmatizing patients with opioid use disorder
Linda Driscoll Powers (2nd place winner)
BSN candidate May 2020
Honors Program
Driscoll Powers Poster 8-30-19
A prevailing stigma surrounding substance abuse disorders could cripple attempts at reducing the opioid crisis in this country, especially considering some of those attitudes come from the caregivers tasked with leading the charge.

That was the premise of CU Nursing honors student Linda Driscoll Power’s study aimed at improving medical assessments of patients with opioid use disorder (OUD) through trauma-informed care.

"Researchers have linked opioid use disorder with lifetime history of sexual, physical, and emotional abuse and chronic pain. Recognizing this in patients, and using standardized trauma-informed screening tools, could reduce opioid use in this country and help people already addicted receive better treatment," she said.

The program reaches rural areas of Colorado with high opioid overdose rates and recently received $2.5 million by the state to expand.

“We need to remove the blame and shame and understand more about why some people become addicted to pain medications,” Driscoll Powers said. “We may be able to help people heal faster if they can learn about the connections between lifetime trauma and abuse and patterns of addiction. For some people, that’s being completely missed right now.” 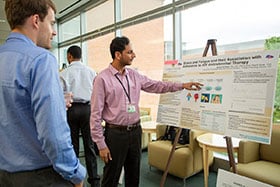 Nasser Al Salmi, presents the 'why'
in HIV drug adherence.

So PhD candidate Nasser Al Salmi and colleagues set out to answer the “why” so many people living with HIV fail to follow their regimen, a proportion that falls somewhere between 27% and 80% (depending on population and measure).

“When the rate is below 95 percent, it always leads to different complications, and one is treatment resistance,” said Al Salmi, one of CU Nursing’s true “long-distance” students, who hails from Oman.

Many factors, from drug side effects to lack of transportation, can come between patients and their medication adherence. For this study, Al Salmi focused on stress and its effects.

While the preliminary study cannot definitively link stress and drug adherence, the results backed a model derived from a CU Nursing bio-behavioral group. The “Two Minds Theory” suggests that low heart rate variability can be used to measure stress, and that stress and fatigue influence daily adherence.

Researchers used Fitbits for monitoring subjects’ heart rates, and participants filled out daily surveys on stress, fatigue and adherence, among other topics.

“With good adherence, patients improve their biological and immunological response and reduce the risk of severe complications, including death,” Al Salmi said.